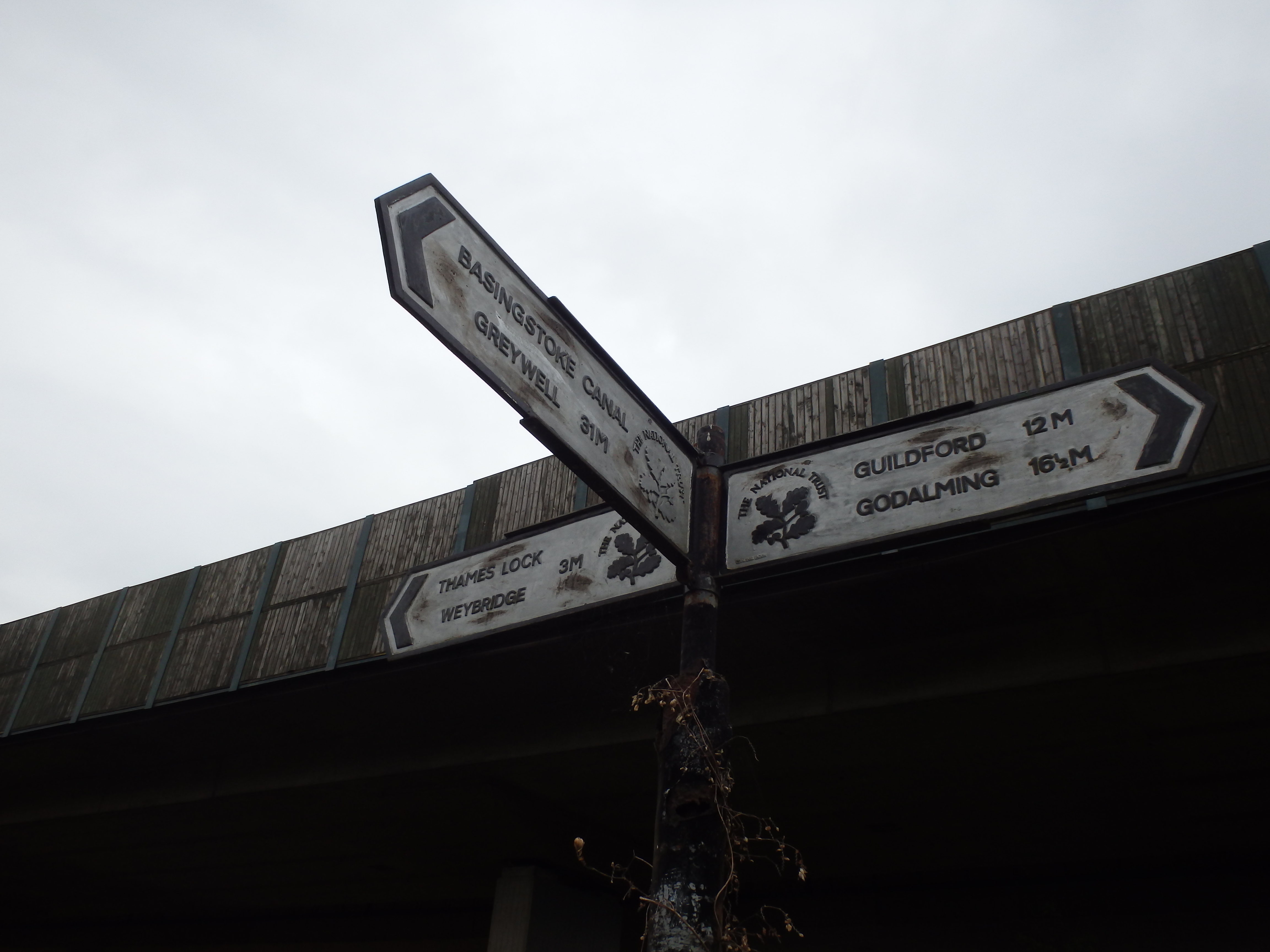 Today’s route takes us from my house to the Blackwater valley along to the Basingstoke canal, just before Weybridge we turn left and join the Thames to Kew bridge which we cross head back into Brentford onto the massive Grand Union to our overnight stay at The Waters Edges cottages www.the-watersedge.co.uk/home

The day finally arrived and after all the planning and sitting for countless hours farting about with the maps on PC it was time to get our bikes out and put it all into practice.

We had planned to get off at 6 am so Friday evening was spent having dinner, checking the bikes then packing so we could get off with the minimal fuss in the morning.

At 5 when the alarm went off all of my enthusiasm seemed to have drained away perhaps it had something to do with “dinner” the night before which was accompanied by a couple of pints, followed by a shared “Malbec” before retiring… No real choices here we had to get up and get off, Susan did not seem quite as lethargic as me so by 6 we were on our way.

Not very surprisingly the road to the canal was very quiet, not many idiots up at 6 am on a bank holiday weekend… just the two of us. 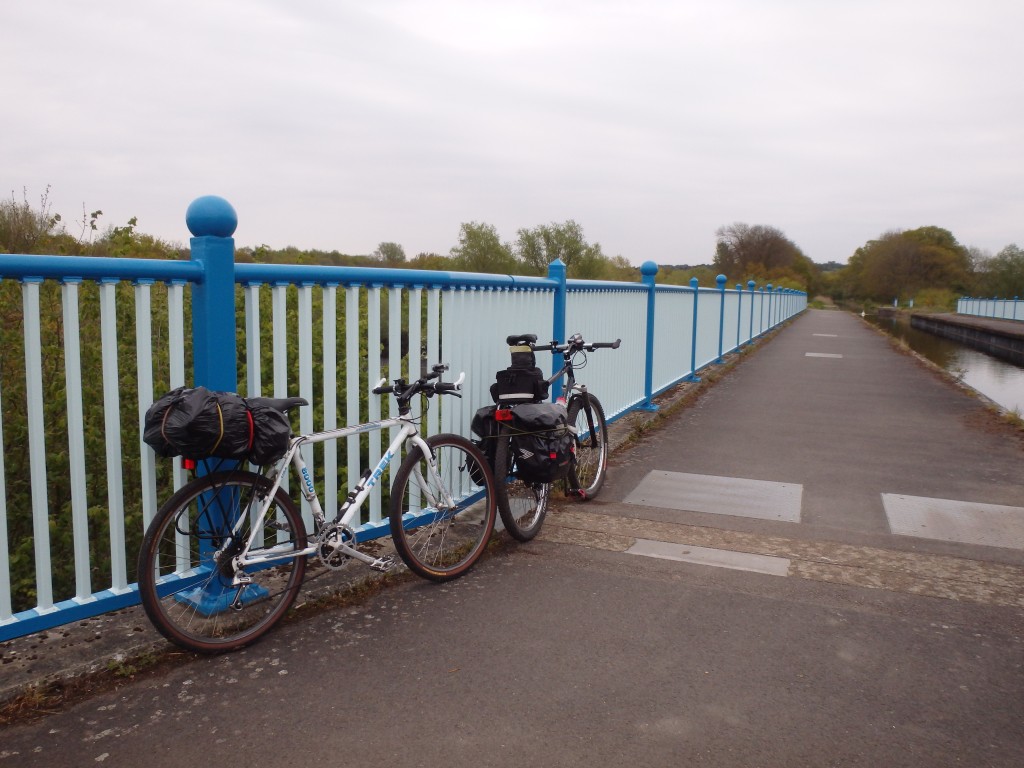 All quiet at the start

The route to the Wey navigation is one we have done many times, nothing much new to see but we did see a swan nesting. 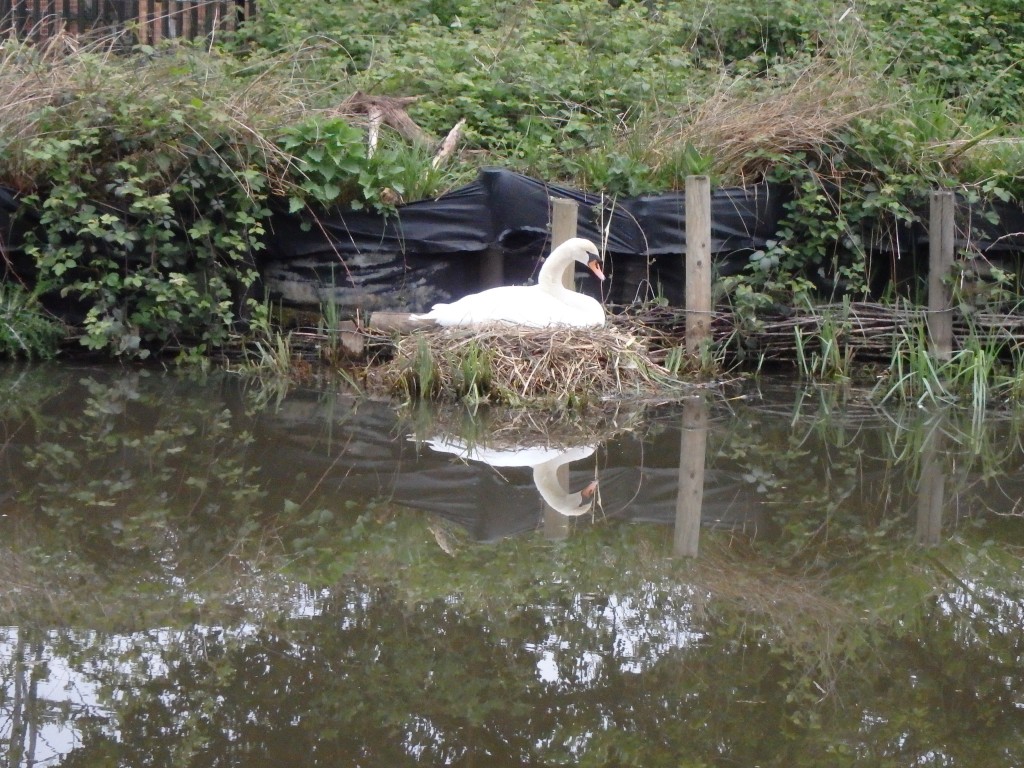 By now it was about 8 am and all the posh people were out rowing, walking their F***ing dogs, jogging and generally getting in our way, thankfully they only seemed to be gathered round major intersection so once we had passed these all was reasonably quiet again.

After 3.5 hours we were just about at Kew so we stopped and had a proper rest, sat on a bench had a sandwich and watched the river Thames flow past. 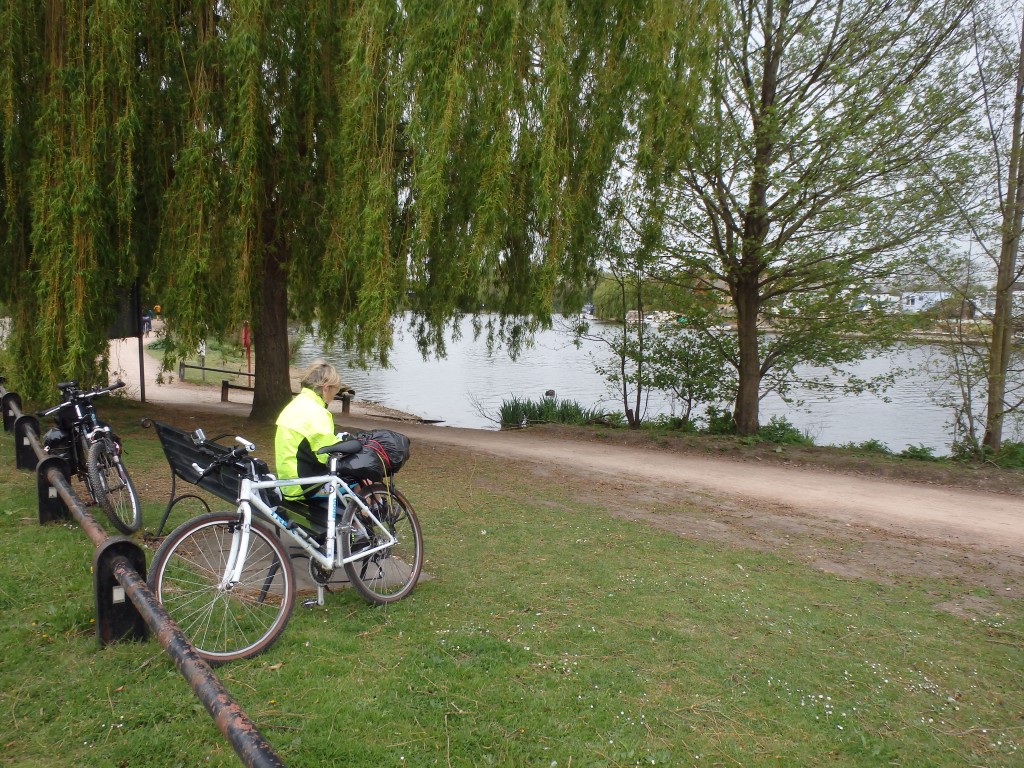 Having a proper rest.

It was still a little chilly so we were soon on our way crossing Kew Bridge heading back on the opposite bank to Brentford were we got on the Grand Union tow path. 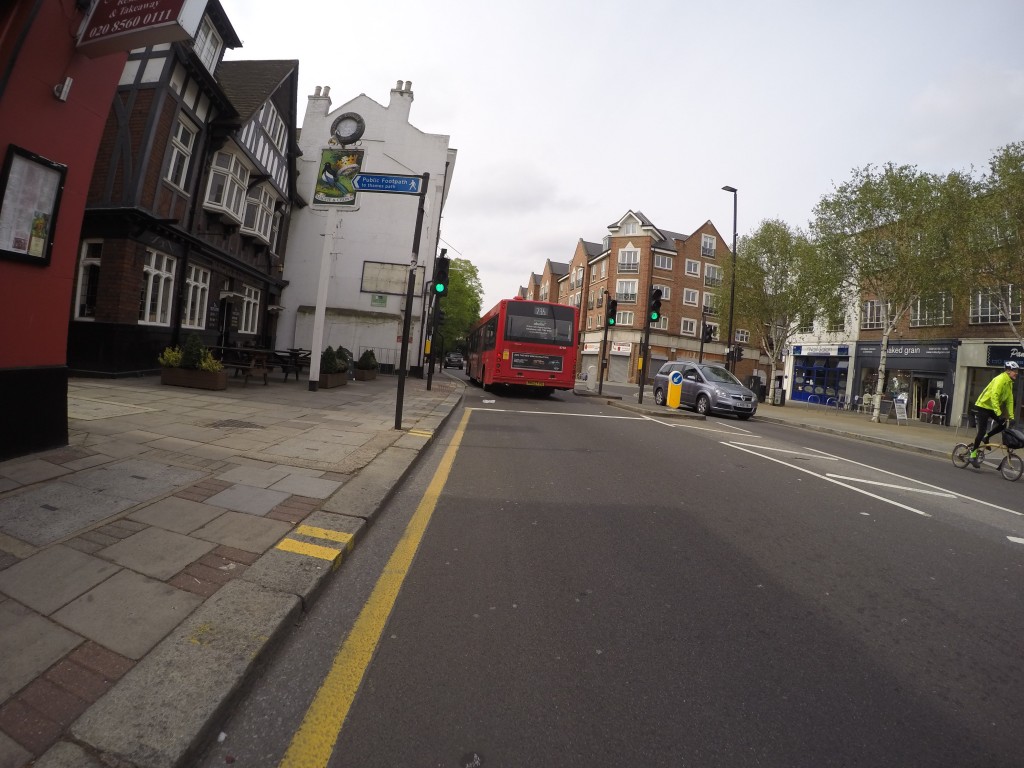 A short zip along the road. between canals

I knew this stretch as I had cycled it many times while working at Ealing Hospital although it is quite a bit “posher” than when I worked there. 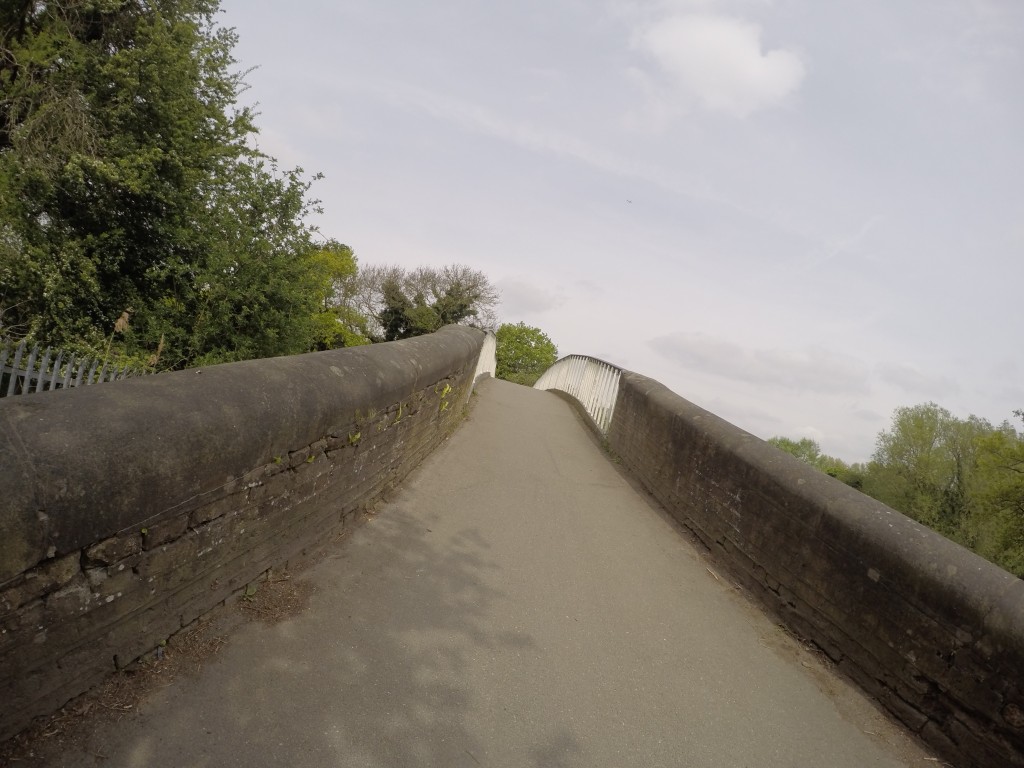 Its not always FLAT

It was beginning to be a bit of a slog now so we just kept pushing on until we were at the Tesco store just before our accommodation. We parked here and Susan bought some supplies for tomorrow… more fluid and unusually there was no alcohol!

On arrival at our stop we called Patsy who drove over and took us somewhere a little nicer for lunch / dinner. A couple of pints of “Proper Job” http://www.staustellbrewery.co.uk/proper-job for me and a bottle of Malbec to share… it was quite a pleasant way to end the day.

We are now relaxing in our room charging all the gadgetry ready for an early night and probably an early start. It’s quite cosy in here, the room is small and we brought our bikes in as we don’t want to chance losing them overnight 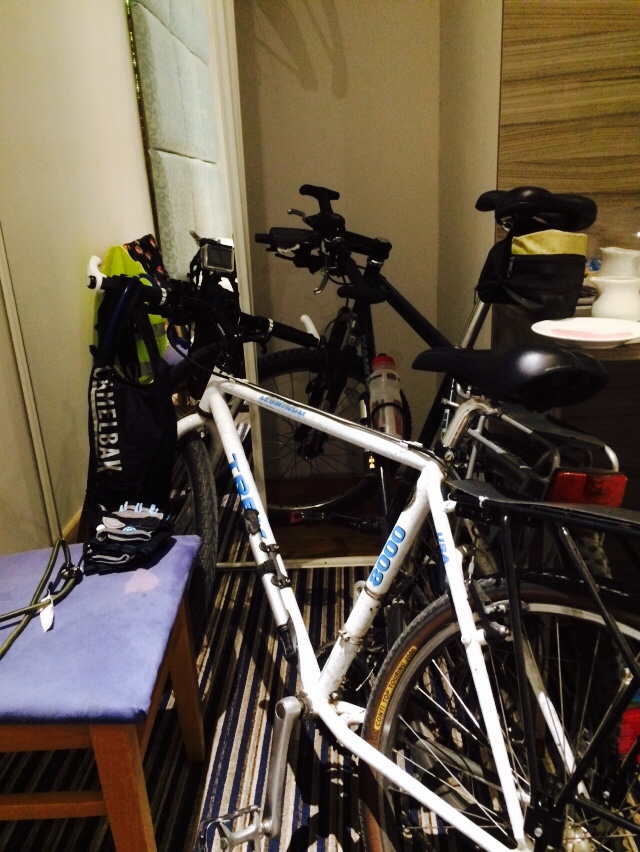 The room was so small the bikes had to go in the wardrobe….

In summary it was quite a pleasant ride and we did not get wet….

In the news today ….. we have a new princess and I still don’t know how to use the GoPro. 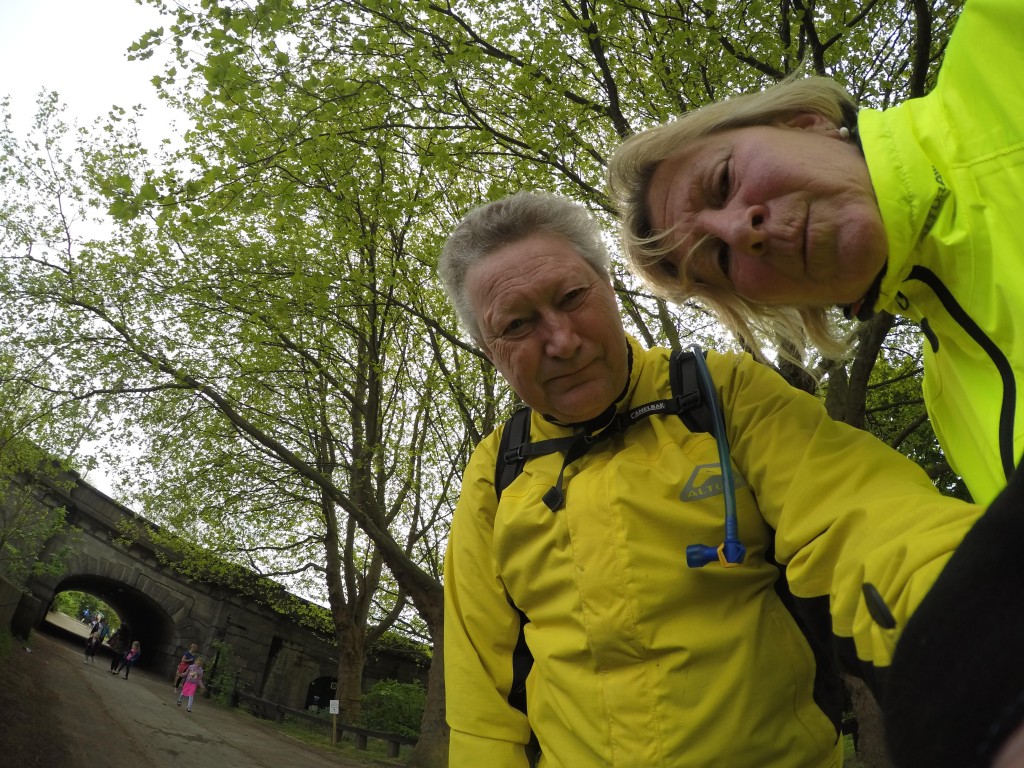