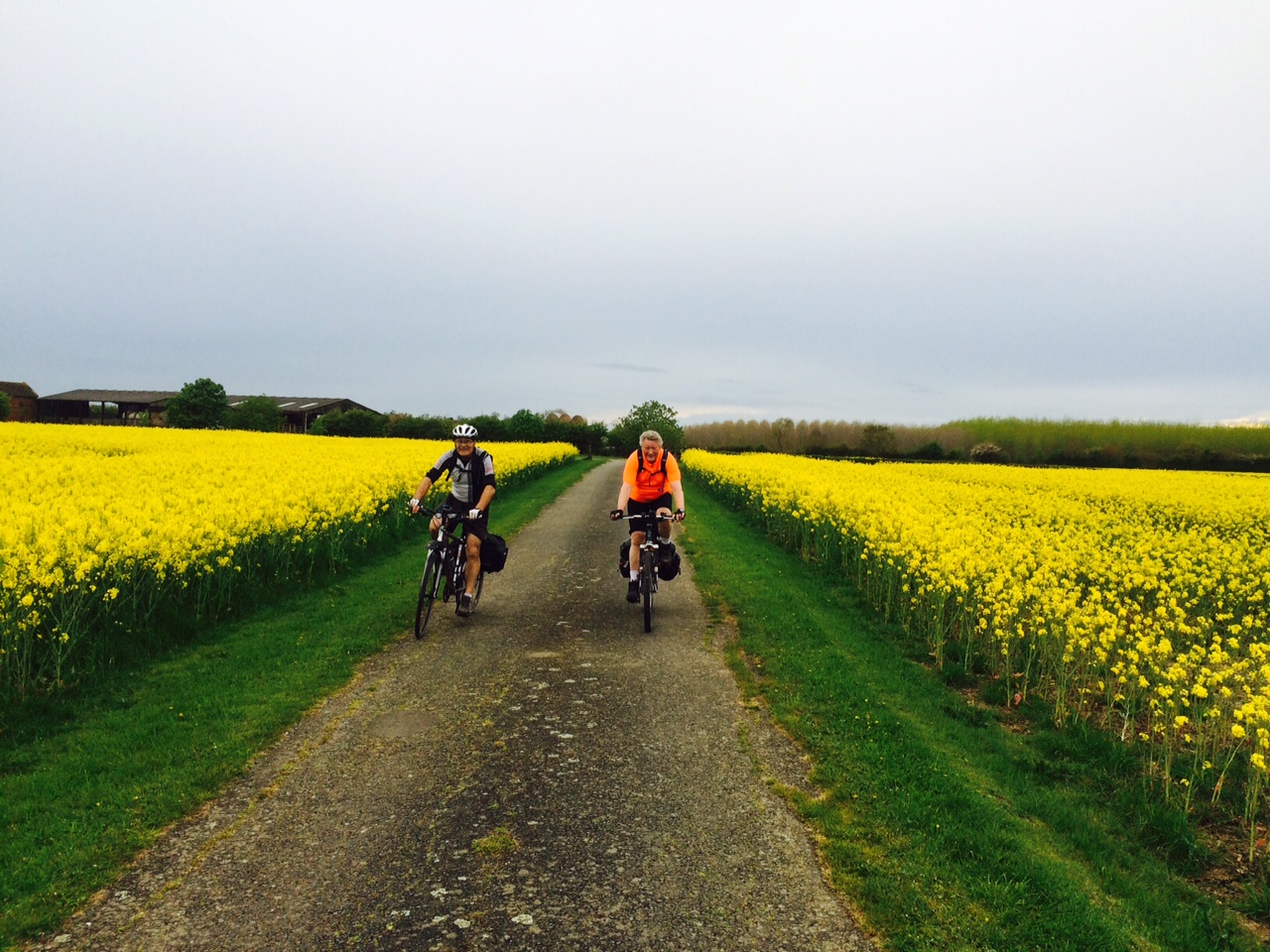 As usual we were up way before the agreed departure time of 7 am, it was about 5:30 again. We showered re packed all of our clean clothes and loaded the bikes ready to get on our way as soon as Jayne and Paul joined us. The sun was shining and it was quite warm, this was exactly what we had hoped for, peace and quiet in the country without a care in the world. We made reasonable time and the tow path varied from none at all (just lumpy grass) to brand new tarmac over a metre wide and smooth… 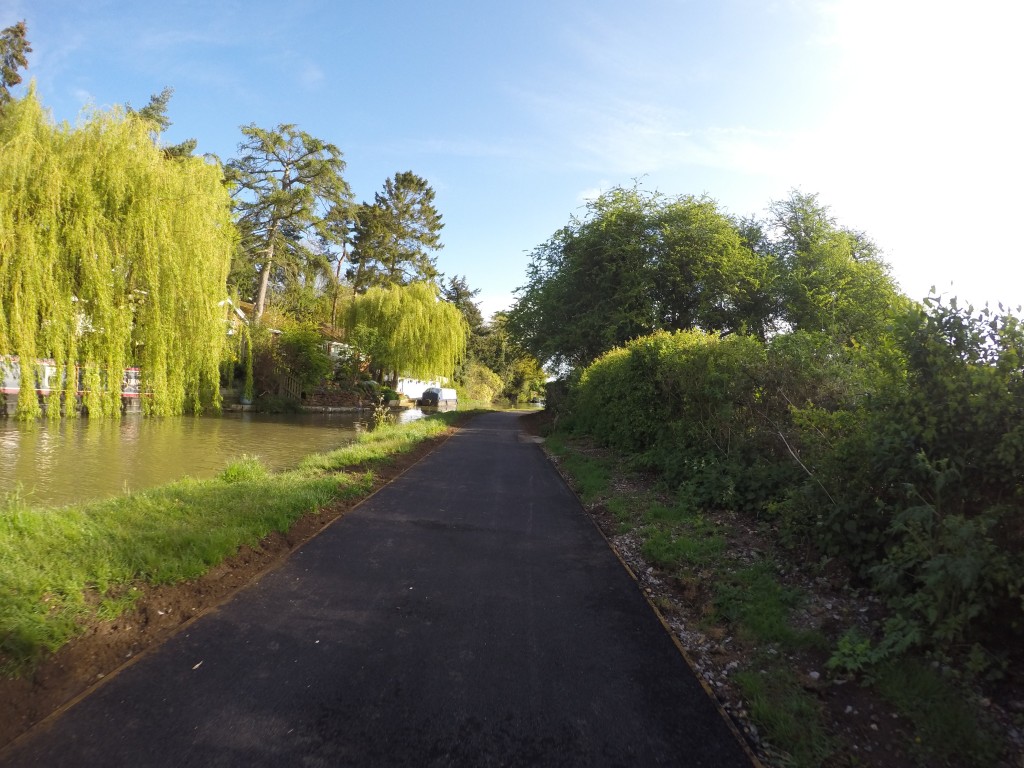 The BEST tow path ever. 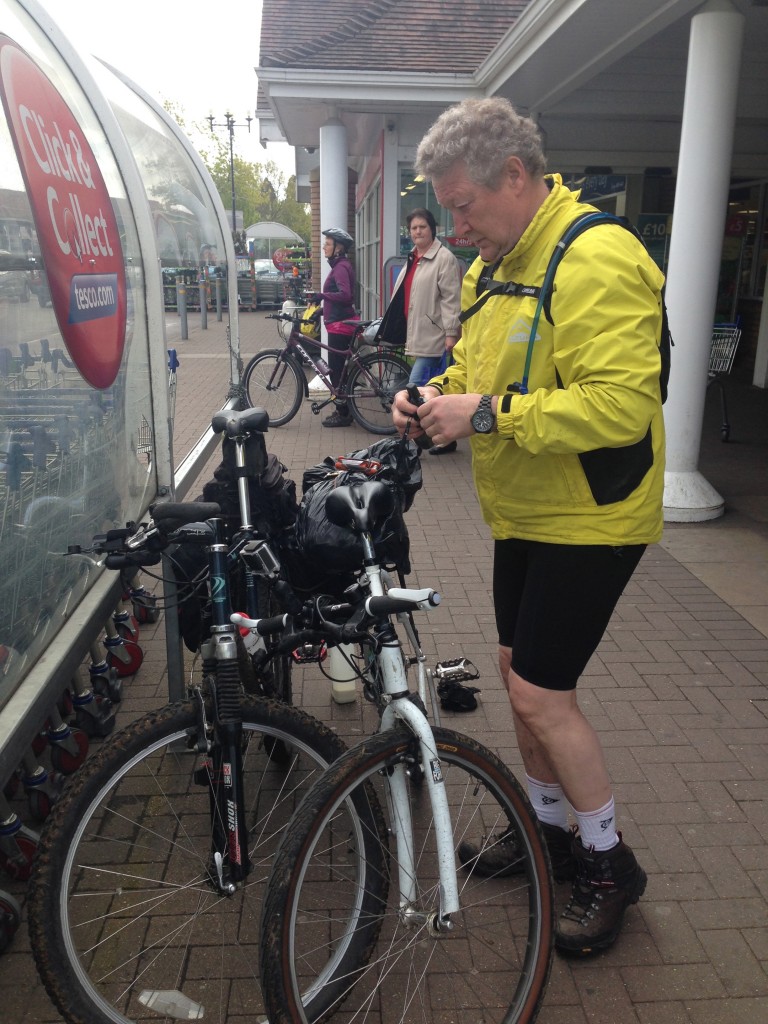 Locking up ready for breakfast

At about 10 it was going so well we left the canal on the outskirts of Milton Keynes to visit Tesco for breakfast. We locked our bikes and went to the counter. Paul ordered an “All day breakfast” only to be told they don’t start serving “All day Breakfast” until 11 am. I’m not sure I quiet get that there is a distinction between all day and 11 am but they were adamant it was not available until 11… Paul just ordered all the items listed and got exactly the same thing. Fed and watered we got back on our way, crossing  the bridge over the great Ouse river we stopped to take a few snaps and were making good progress. 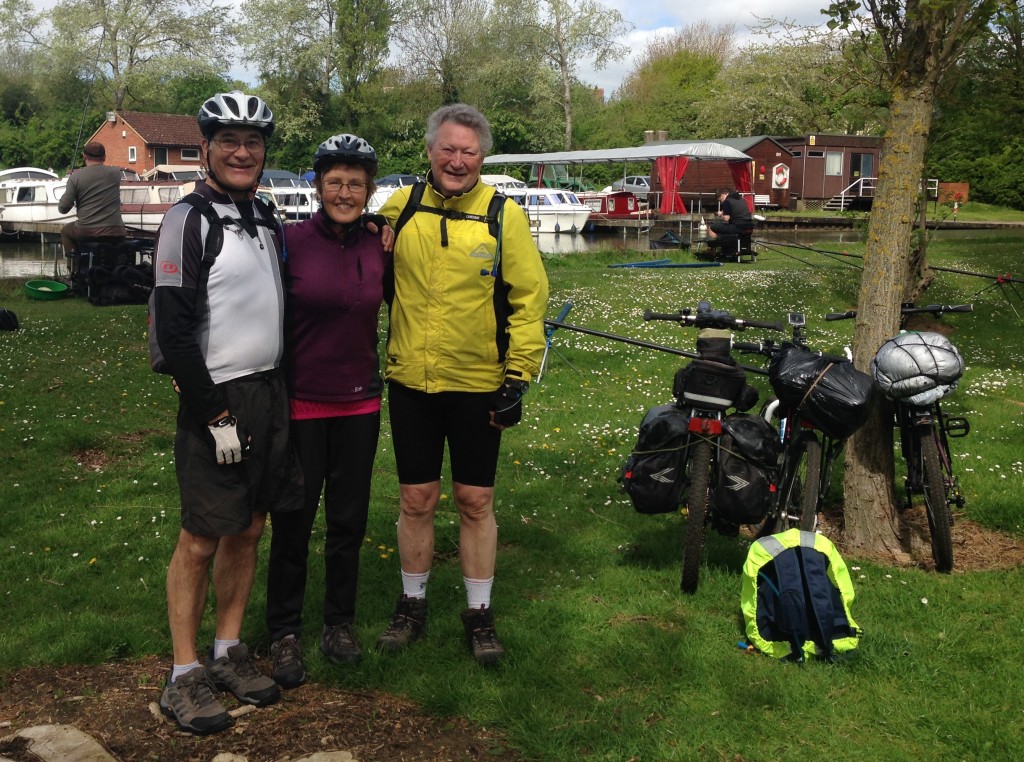 Paul Jayne and I

All was going well and we arrived at Stoke Brueme where we had to leave the canal and cross over the top to the other end of the Blisworth Tunnel. As usual a steep uphill climb followed by an exhilarating thrash down the other side.  I think for once we had a longer downhill stretch than up hill as we had been climbing steadily through a few locks on the way.  At this point I had ONLY had 4 punctures (3 in a hour) so all was good. 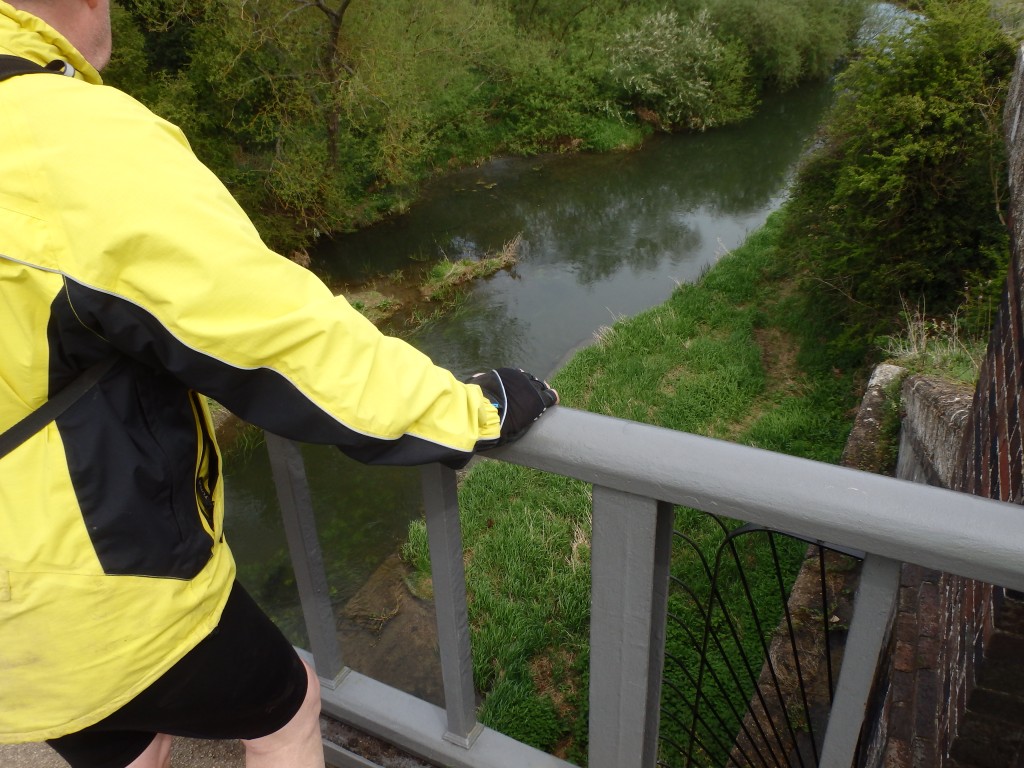 Looking down at the Great Ouse River 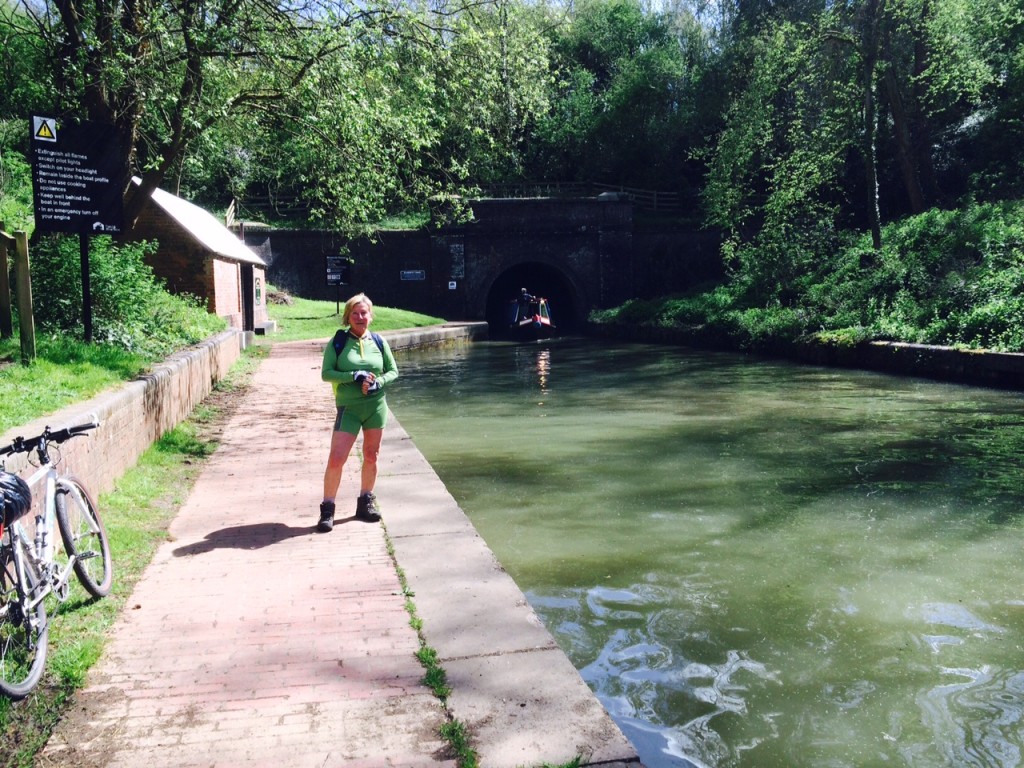 Susan at the far end of the Blisworth tunnel

Quite a long way to go still

As I said previously we had a long day today about 60 miles in total and the pace was beginning to slow but we had set a deadline of 5 at the B&B as we were meeting Keith and Sandra for a beer or two and dinner. It was obvious that with still almost 10 miles to go that the ladies were done in so I called Keith to see if he could rescue them. We agreed that they would keep going to Braunston where he would collect them. At this point Paul got a puncture so we sent the ladies on while we fixed it. It was a bugger getting the tyre off as it was brand new and had never been removed… unlike mine that were also newish but had been off 8-10 times already on this trip, they practically took themselves off. Puncture fixed we accelerated away only to catch the ladies up about half a mile later … they had enough  so Susan had called Keith to come and collect them, Jayne who had never met Keith and Sandra before declared that she “loved them”

We waited until Keith arrived and tried to work out what we could do.. quickly the plan was put Susan’s bike in the back as it was the smallest , Jayne Susan and Sandra would drive to the B&B and Keith would ride Jayne’s bike back to the B&B with Paul and I….. we were sorted. 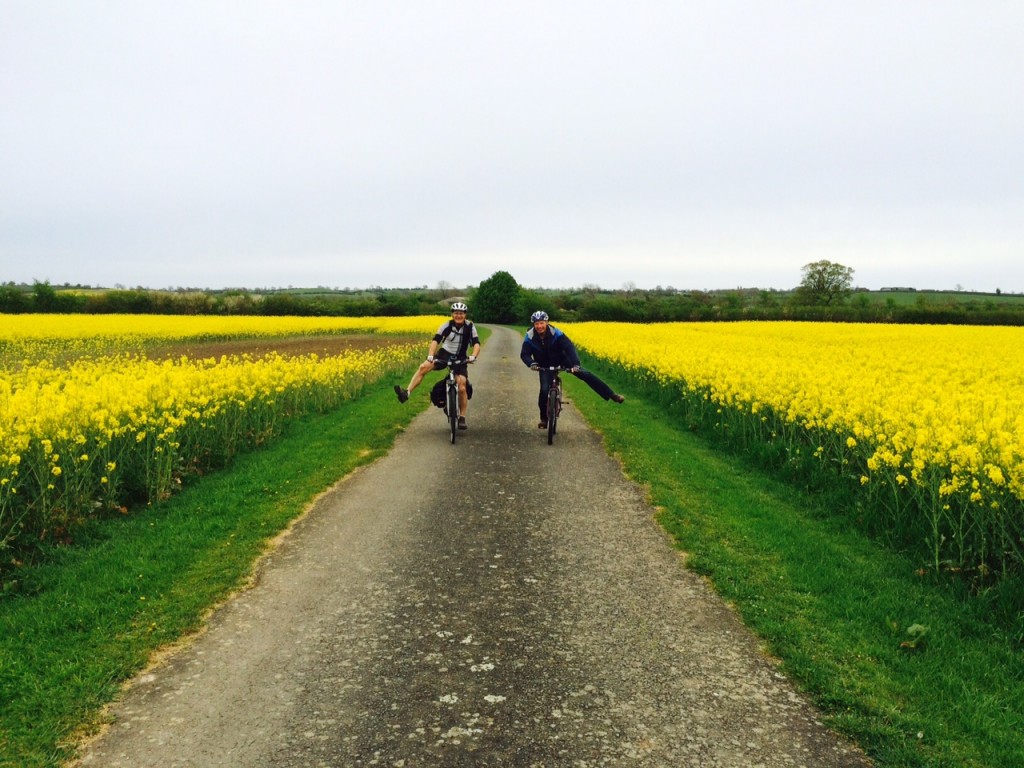 Paul and Keith messing about….

It was almost 10 miles to the Farm Lodge B&B which was on reasonable paths but the pace was high and I admit I struggled to keep up with them.  We had to leave the canal again at Daventy and rejoin at Braunston.  A couple of nasty footbridges at Braunston slowed them down a bit and whenever there was mud Keith slowed as he had his “best jeans”on.  A small slice of luck was that I had the only functioning SatNav so at every turn they had to wait for me to direct them… there was even the option to take the wrong canal towards Coventry so it was a good job they did wait for me.  When we finally hit the road I could see the B&B so spirits lifted we cycled down a long drive with rape seed fields on either side, it was beautiful.  There was only one slight problem and that was that we were at the wrong farm as the three puzzled people who met us pointed out.  Not to worry we turned round and the Lodge Farm B&B was the next exit on the road

We had finally made our overnight stop and pushed our bikes into the covered poly-tunnel store where we would leave them overnight.  Keith had brought his track pump so I went to put some air in the tyres only to see my front had punctured again!!!  Well it would have to wait until the morning as dinner and a beer was calling so we showered and went to the pub only to be told they did not do food on a Monday.  We drank up and went to the local “Indian” which we had wanted to avoid as we were not going to be near many toilets the next day and we all know the effect that a curry can have……

As I said the 10 miles from when we left the girls had been a a high pace and I was absolutely exhausted on arrival, so much so that I forgot my manners and didn’t even say hello to Val and Ted…. I do aplogise