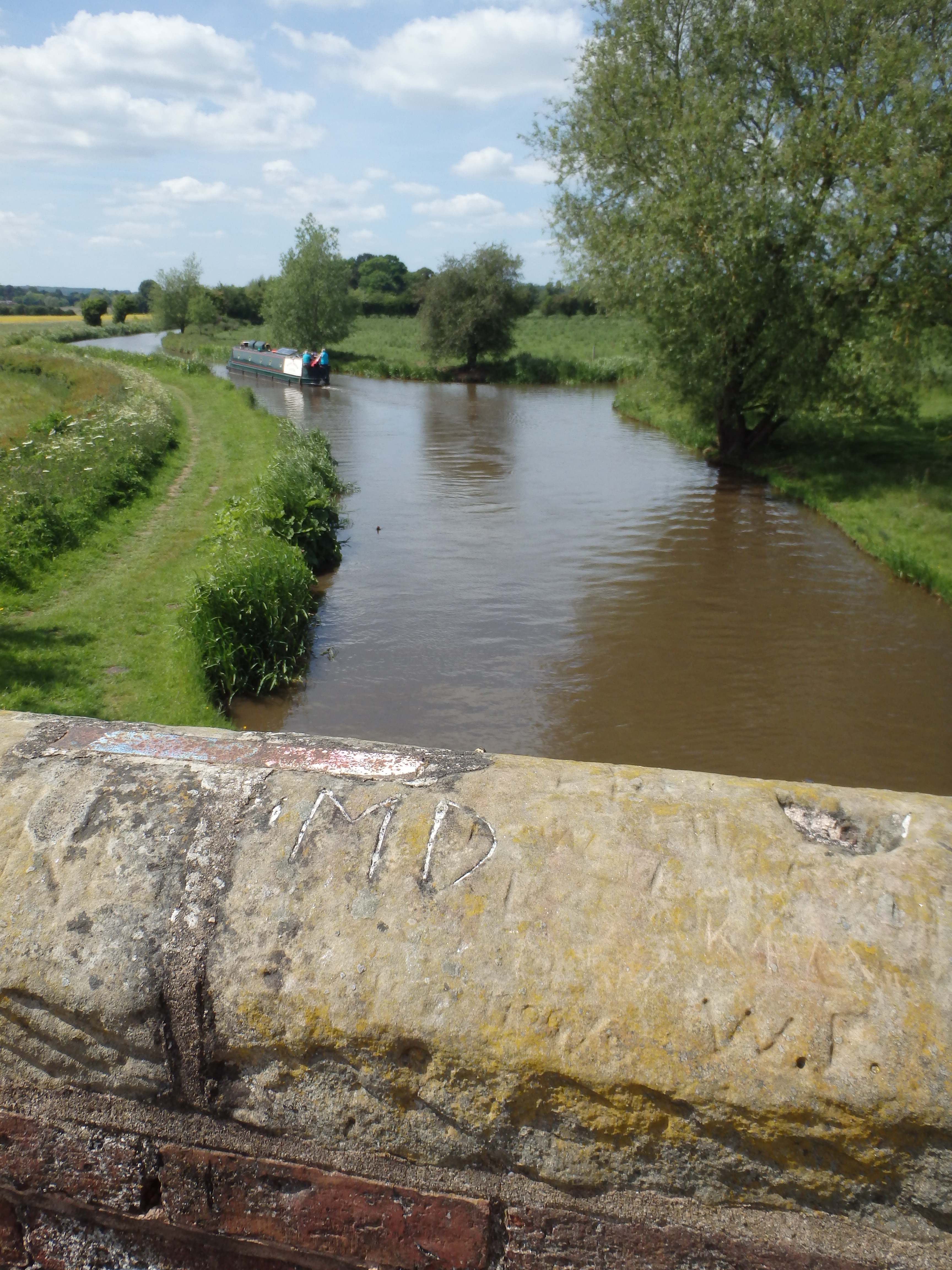 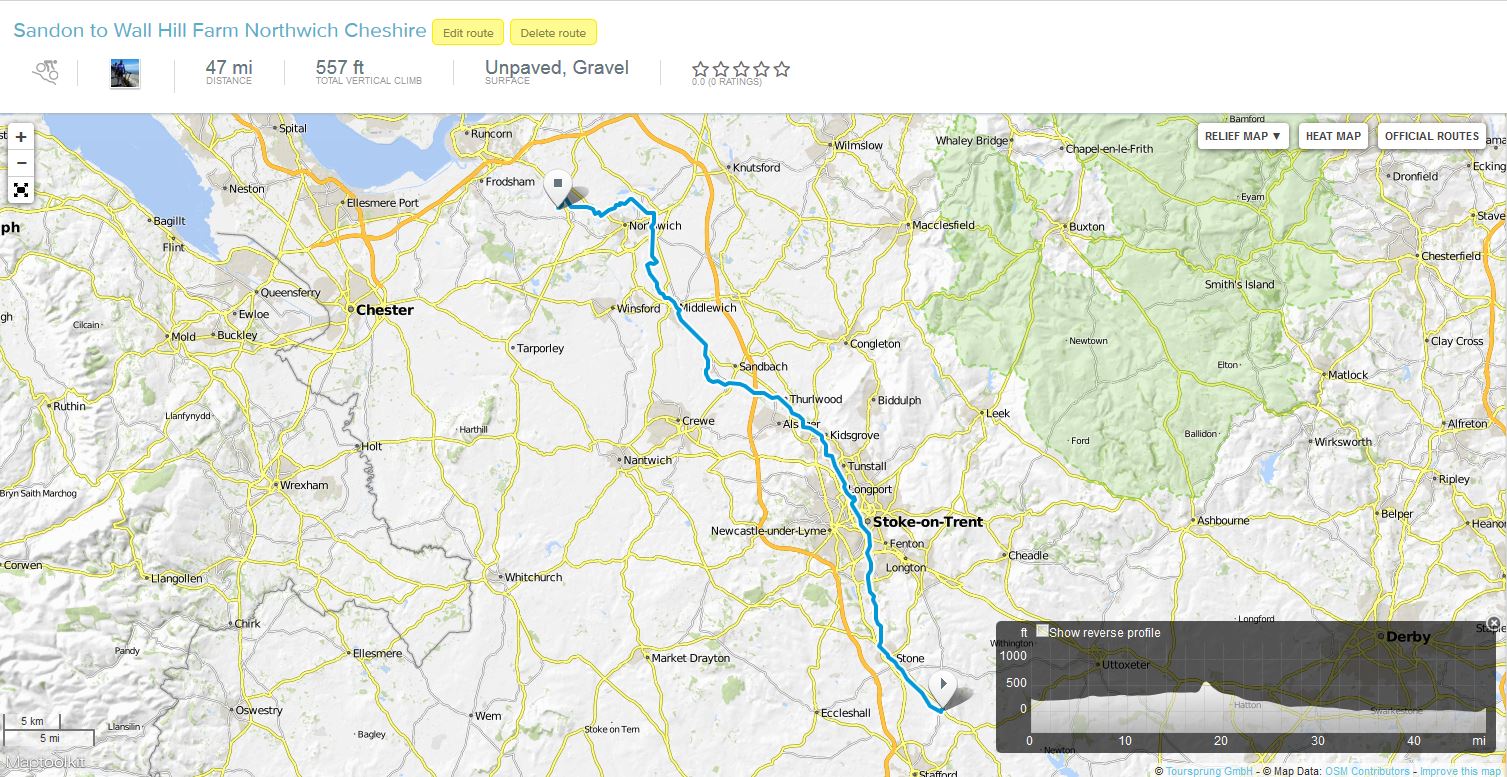 Today’s Route is about 48 miles with us starting at The Dog and Doublet at Sandon Lock finishing at Wall Hill Farm Acton Bridge Nortwich. Although we will be on the Trent and Mersey Canal all day we have to leave the canal at two points where there are long tunnels without a tow path.

We woke early as usual and packed before breakfast at The Dog and Gauntlet which was very good. We collected the bikes from the garage and loaded everything ready for the start. 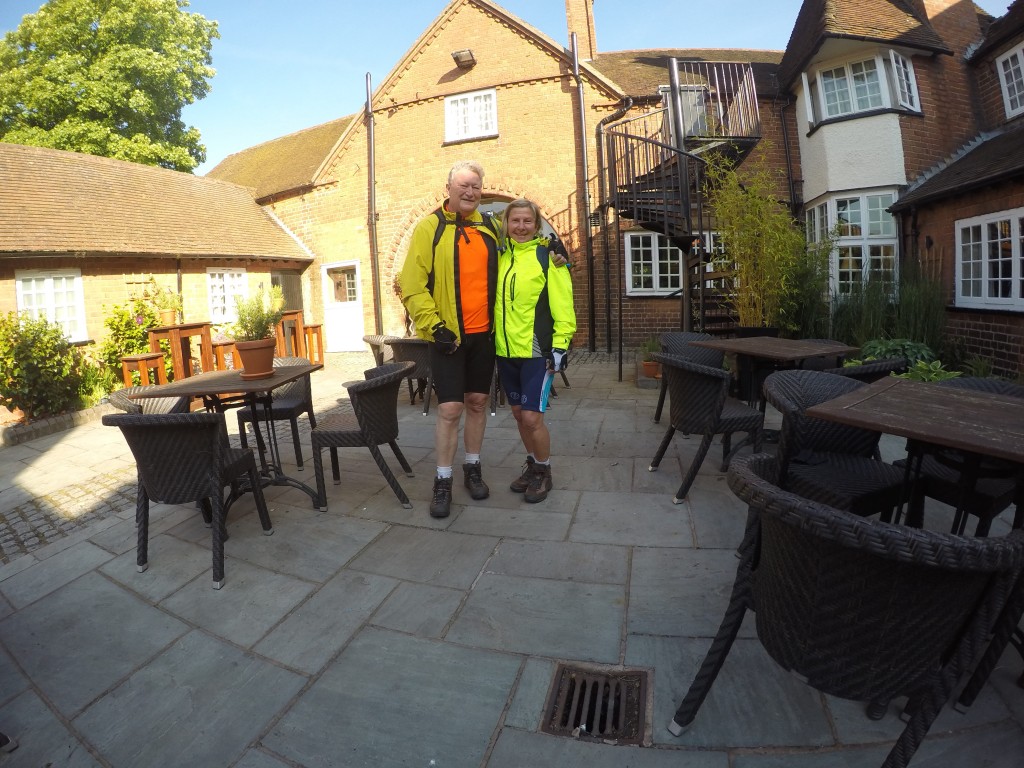 We decided to push out bikes back to the canal as the road was quite busy and it was uphill. We were not looking forward to the start as the last few miles last night had been tough and we expected the start to be the same… we were right. The path was very rough back to the lumpy molehills and generally not very comfortable, yes my backside was sore already. 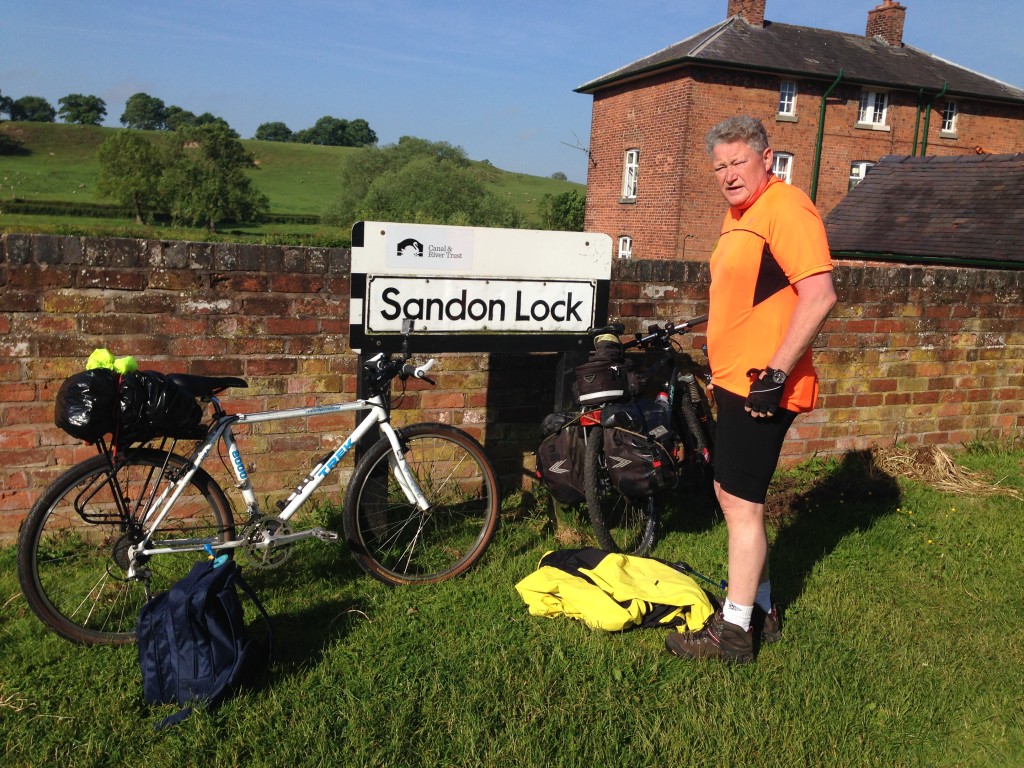 Getting ready at the start 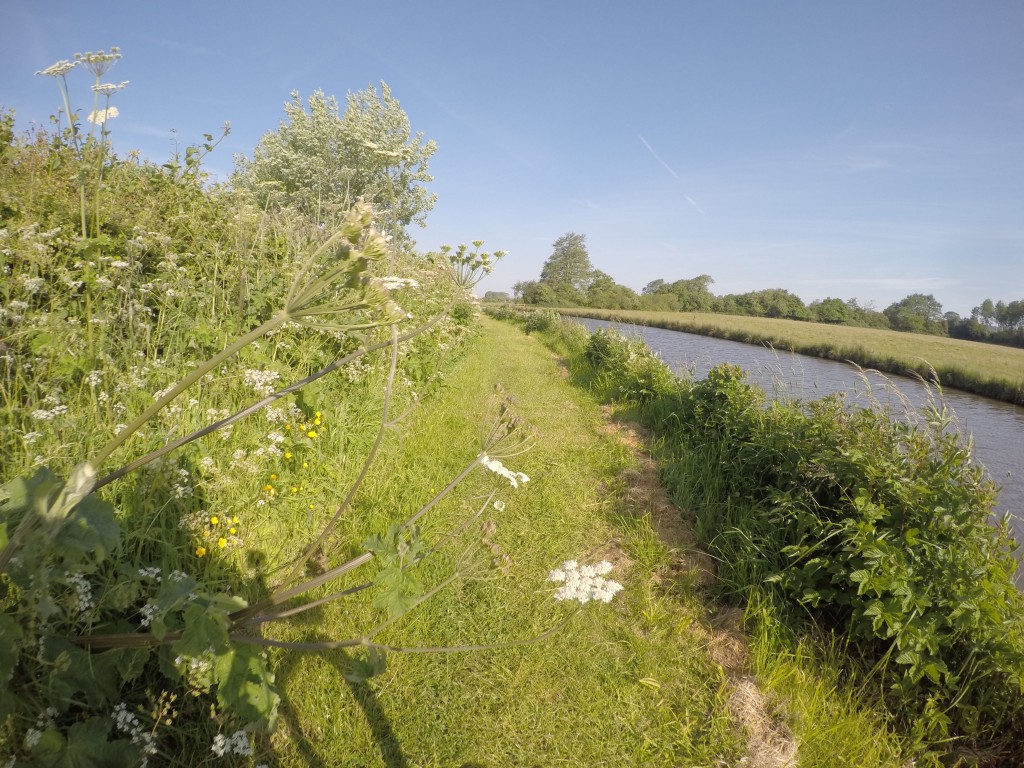 The path at the start…. 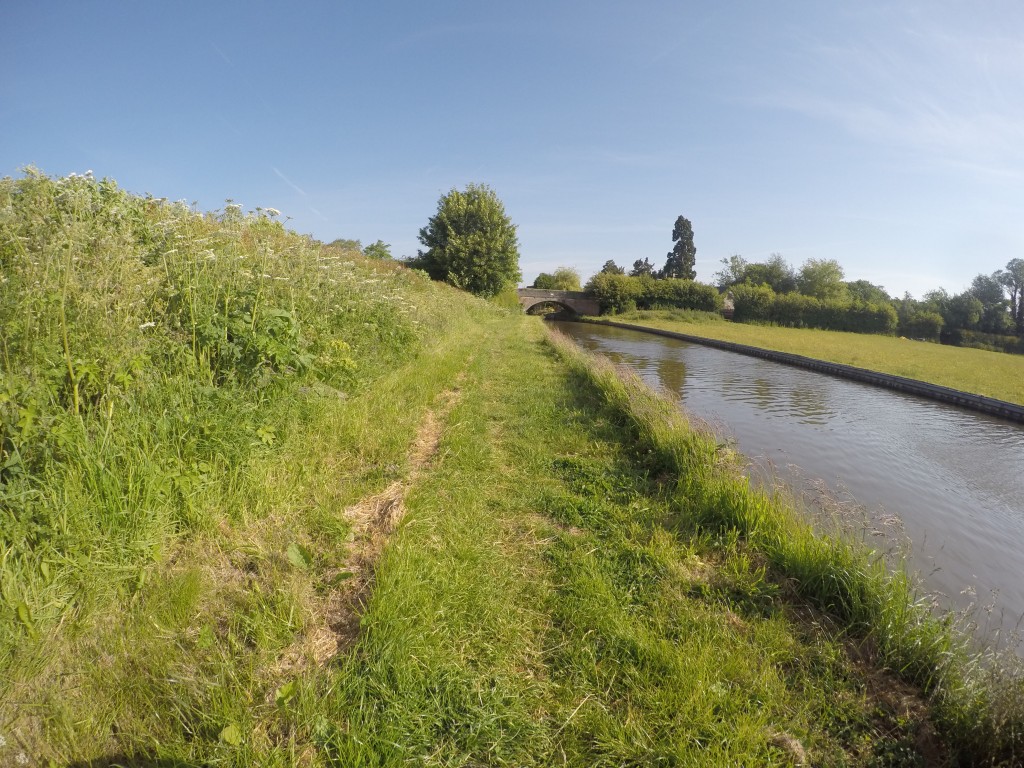 Talking of sore after about 10 miles Susan’s leg really started playing up so we started looking for a pharmacy where we could get some pain killers. We found one only about half a mile from the canal in Stoke so we left our route and popped in. The Pharmacist took a look and handed out something from “under the counter” and we were on our way back to the route.

We had to be a bit more awake today as there were a couple of branches on route when we really needed to be on the right side of the canal. Keeping a close eye on the GPS everything was going to plan, we had almost every bend and kink mapped so it would be reasonably difficult to get properly lost.  Even with the GPS I managed to miss the turning off before the tunnel at Harecastle. 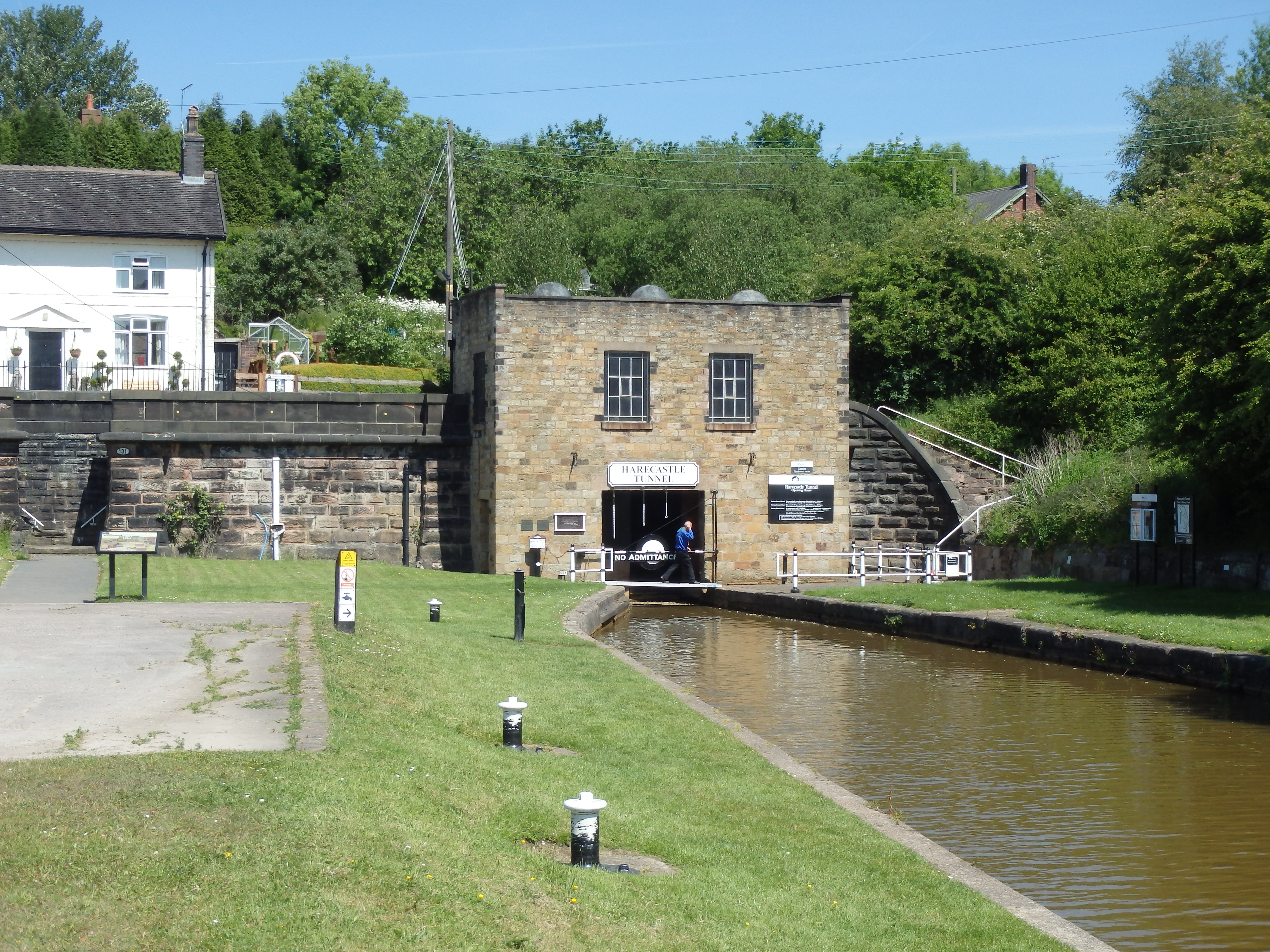 Back tracking slightly we crossed over to the other side and up a very steep hill to the road.  The route I had plotted kept us off any major roads so we happily set off up a country lane to get to the other side of he tunnel.  Unfortunately the map that I had used must have been a little out of date as after passing through a caravan site the road ended and we had a very difficult half mile with heavy undergrowth of thorns and nettles, to cap it all there seemed to be a large dung heap we had to cross which stirred up a lot of angry flies, Oh well no turning back now! 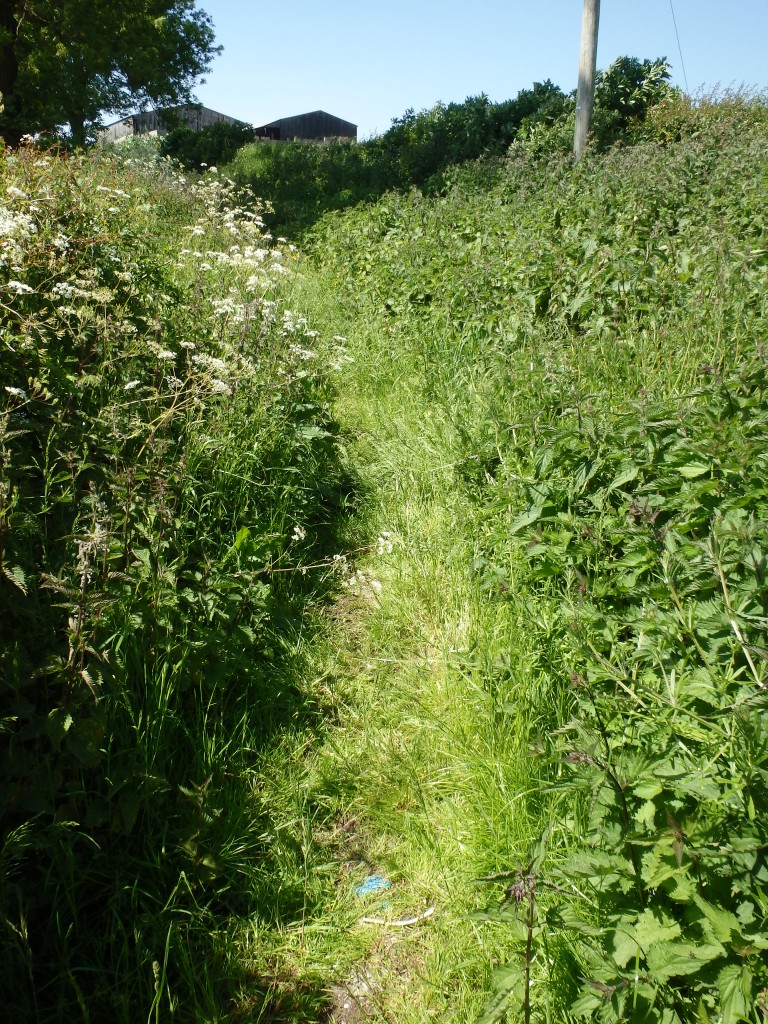 The “road” has disappeared 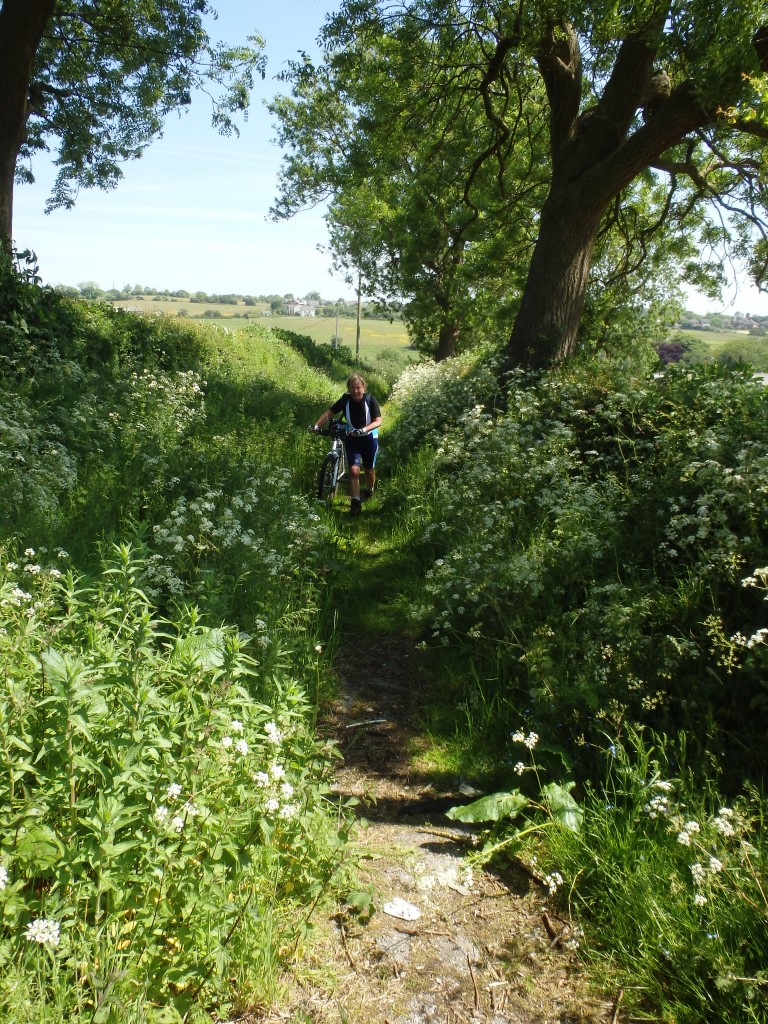 Susan crashing through the undergrowth…. No road here either

When we finally got to the other end of the tunnel it was time for a rest so we chatted to the friendly tunnel keeper while we regained our breath.  He very kindly told us how silly we had been taking that route as there was a much easier one by road…. 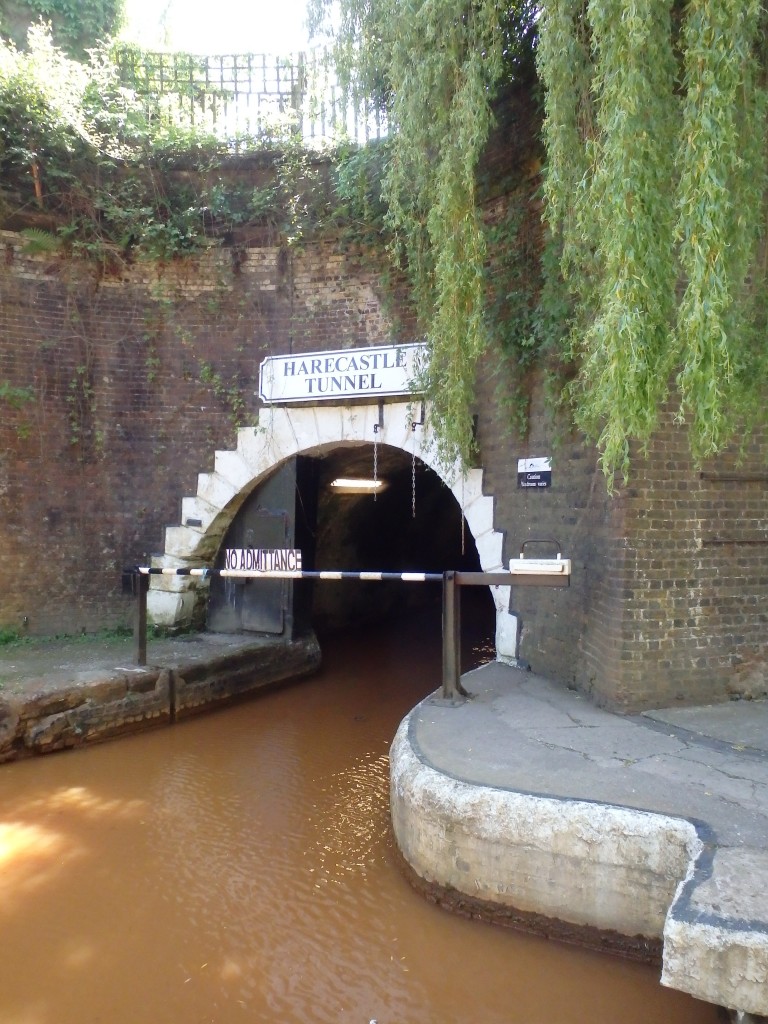 The far end of the Harecastle tunnel

After a short break we were off with still about 20 miles to go.  We had another double tunnel to negotiate but again we had the GPS and there was a path clearly marked over the top running in line with the tunnel.  There were even some air vents marked above ground so how hard could it be? 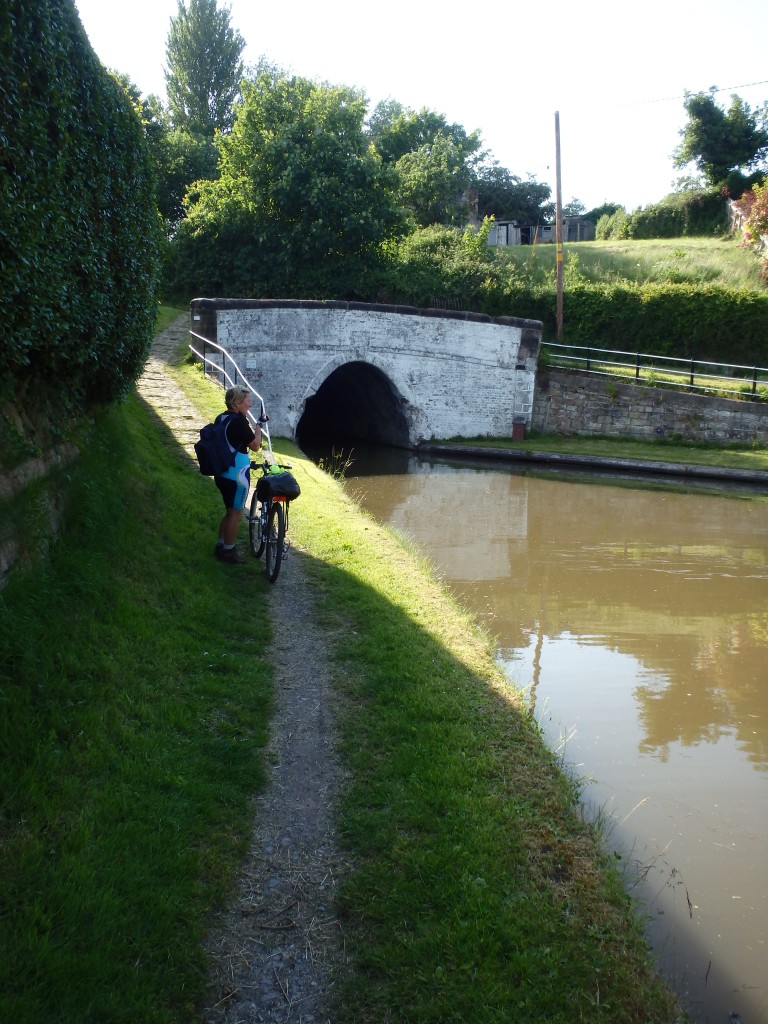 Another tunnel to get round… very steep climb to the road 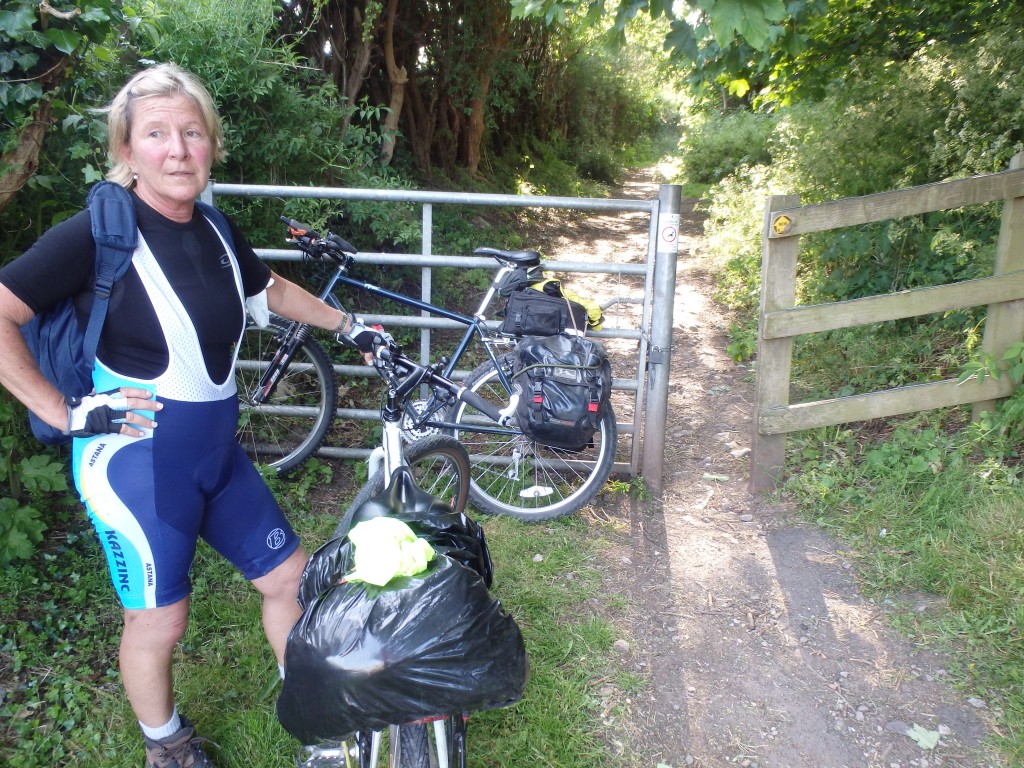 After really struggling to get up the dirt track we were faced with a locked gate which there was no way we could get through so it was back down the hill and find another way via road.  Some helpful local gave us directions and we resumed our painful quest.

We rejoined the canal in-between the two tunnels and guess what yes we had to go up and over the next one again.  There was another locked gate but this time we were not going back and we struggled over / round it.. there are no pictures of this and I’m glad we did not have a sound recorder as I must confess I really did use quite a few of those naughty words I had learned in the army. 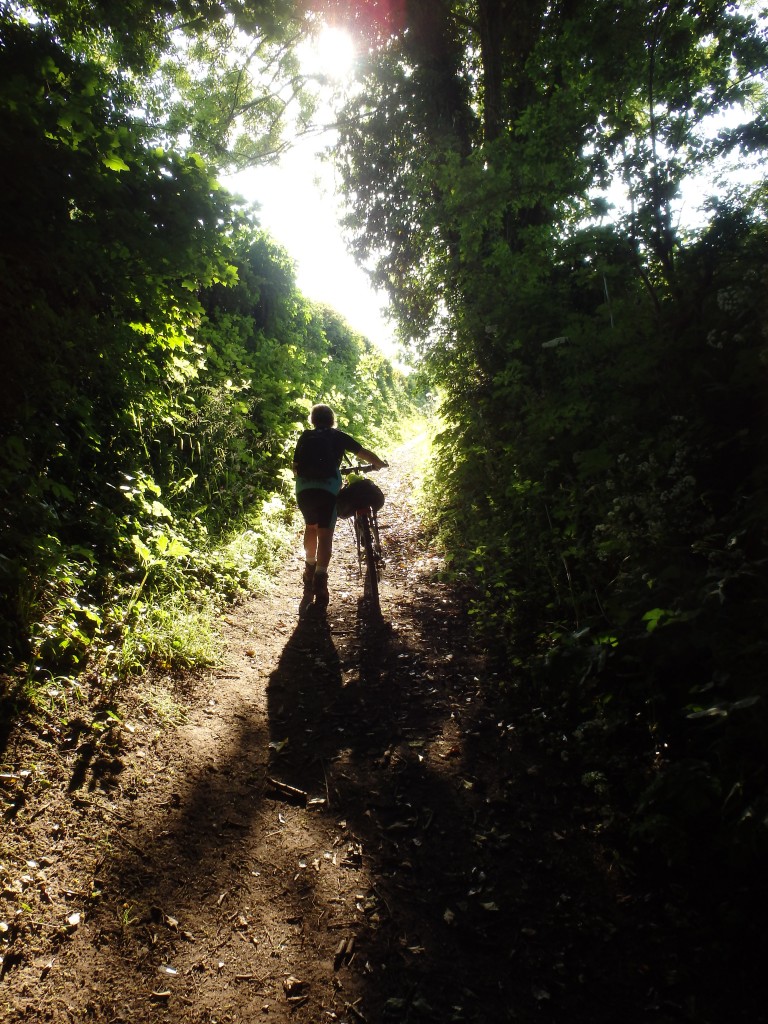 Over the top again….

Down the other side we finally were able to cycle again.. it was still probably 10 miles to the overnight stop  The path was very lumpy again and we did not enjoy the final couple of hours very much but we did eventually arrive in Acton Bridge.  There was nowhere to eat near the B&B so we rode passed to the nearest pub where we had dinner.  It was a busy place on the canal and even though we were hungry there was plenty of food to feed the 10 duckings that circulated our table.

After dinner we rode and pushed our bike to the B&B which although the room was small was very pleasant.  We had a fan delivered so we could cool the place down a little sorted out all the technology and went to bed.  It had been a very long hot sweaty day but it was an easier one tomorrow and we were meeting my brother and his wife for dinner so we were looking forward to a pleasant days ride