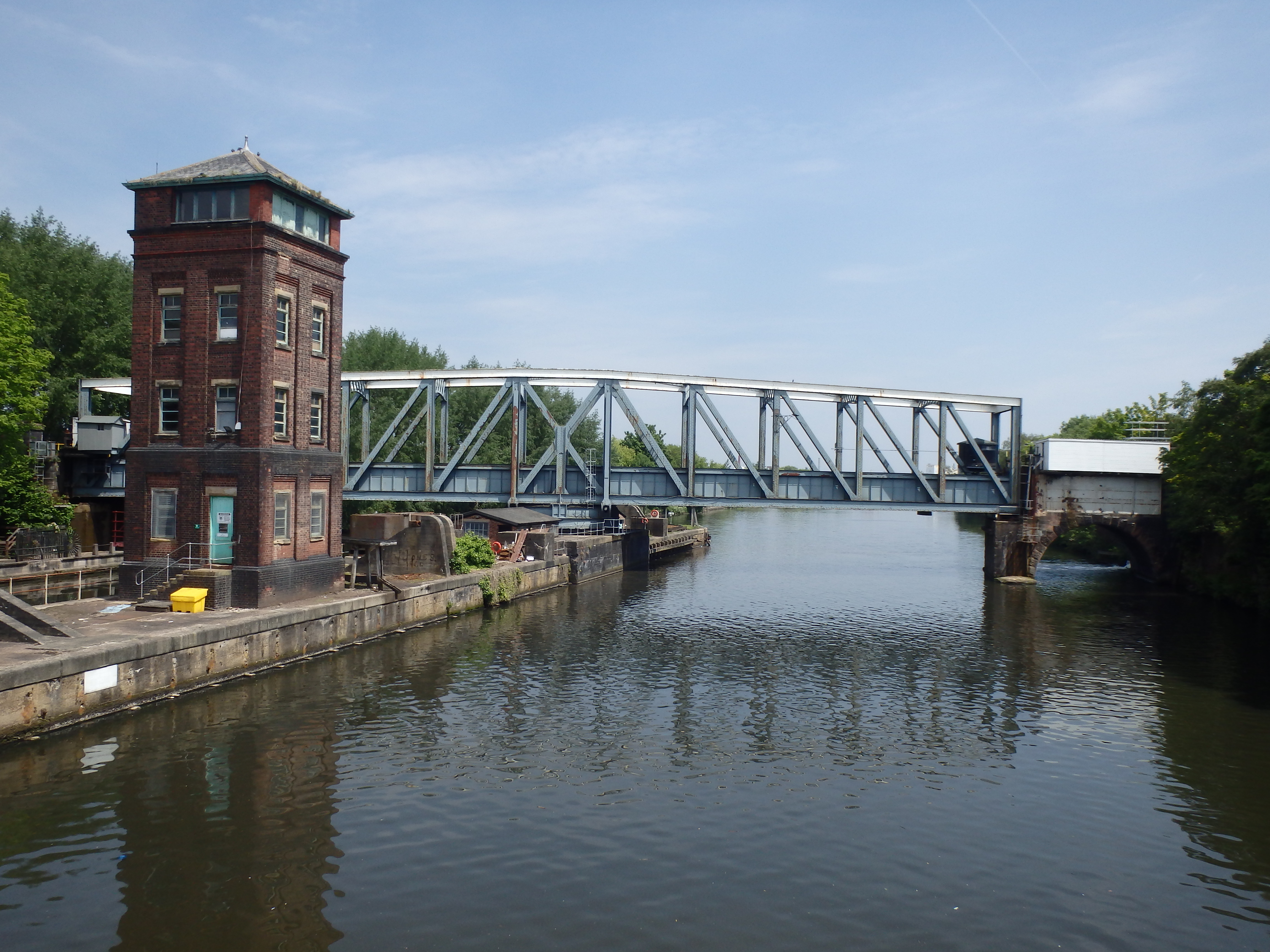 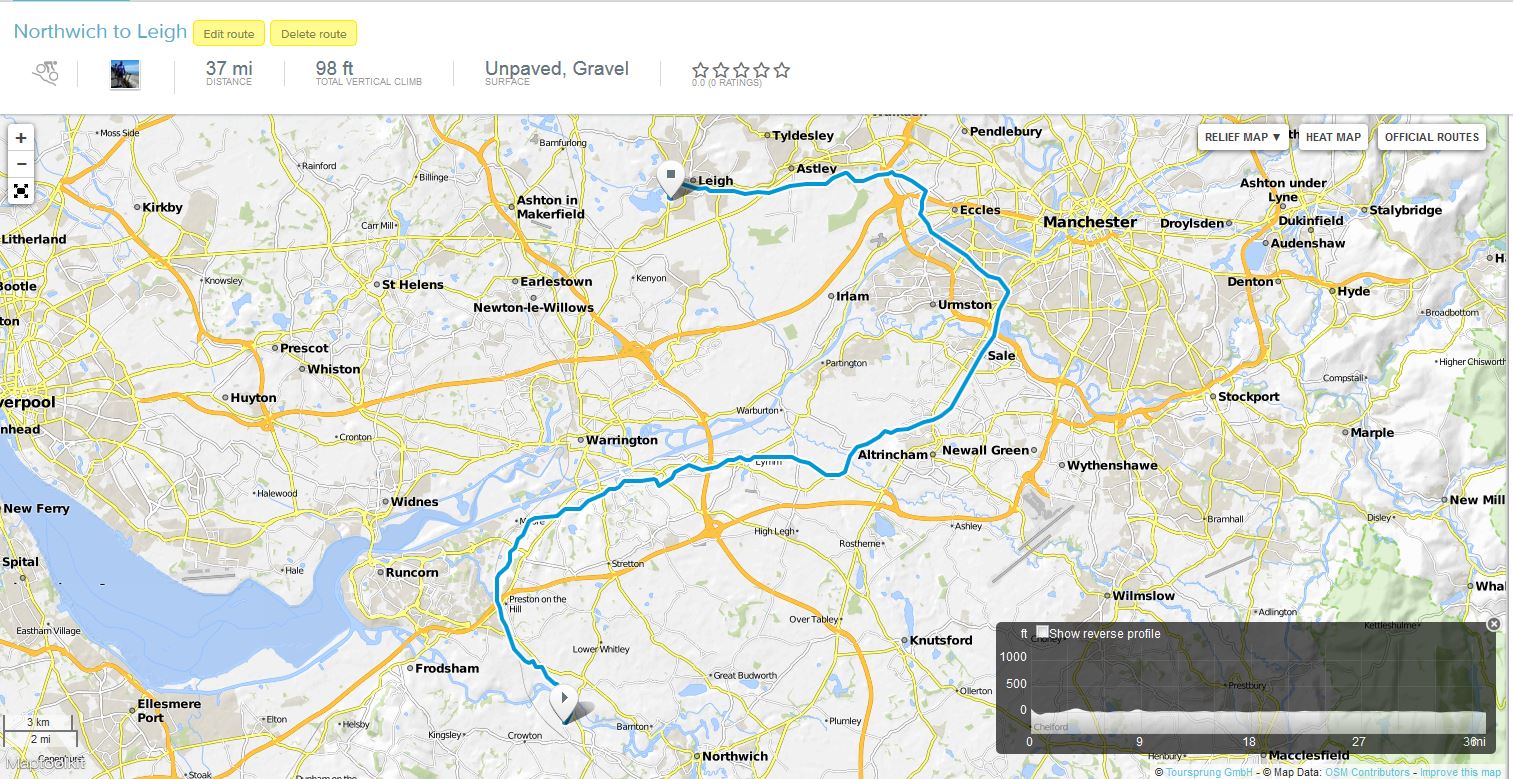 Today’s route is the shortest leg being only about 38 miles.. retracing our steps from the wall farm B&B back to the Trent and Mersey canal leaving it at the Preston Brook tunnel, over the top to then join the Bridgewater canal at Tunnel top north. Continuing along here we take the Stretford and Leigh branch crossing over the Manchester ship canal by the Barton swing aqueduct to our destination the Leigh valley sports complex.

Chatting before we left we were told Leigh was quite close… actually by road at one point it was only 14 miles (Susan had checked on her phone) by canal it was still almost 30…. Oh well at least its flat.

As it was a shorter day today there was no real rush in the morning so we had a full breakfast at the B&B before we were on our way at about 8 am. The start was a little discouraging as it was a steep downhill to the main road then uphill all the way to the canal start; actually the uphill bit was quite short so we got to the canal with breaking too much sweat. Back on the path it was obviously the same as when we left yesterday, quite green and lumpy but we were heading into some more built up areas so we were optimistic of some decent surfaces today.

After 3 miles we arrived at the Preston Brook tunnel where again it was check the Stanav and find our way over, actually it was very straight forward and we were soon at the top and coasting down the other side to “tunnel top north”. Just before we got back on the cycle path a friendly elderly gentleman told us that there were a family of swans on the path with their signets and we should avoid the disturbing them. We agreed we should but F**k it we had to go past them so we cycled by and a little spitting and hissing and we were past (It was the swan hissing honestly but I was willing to do so if we had had any trouble) 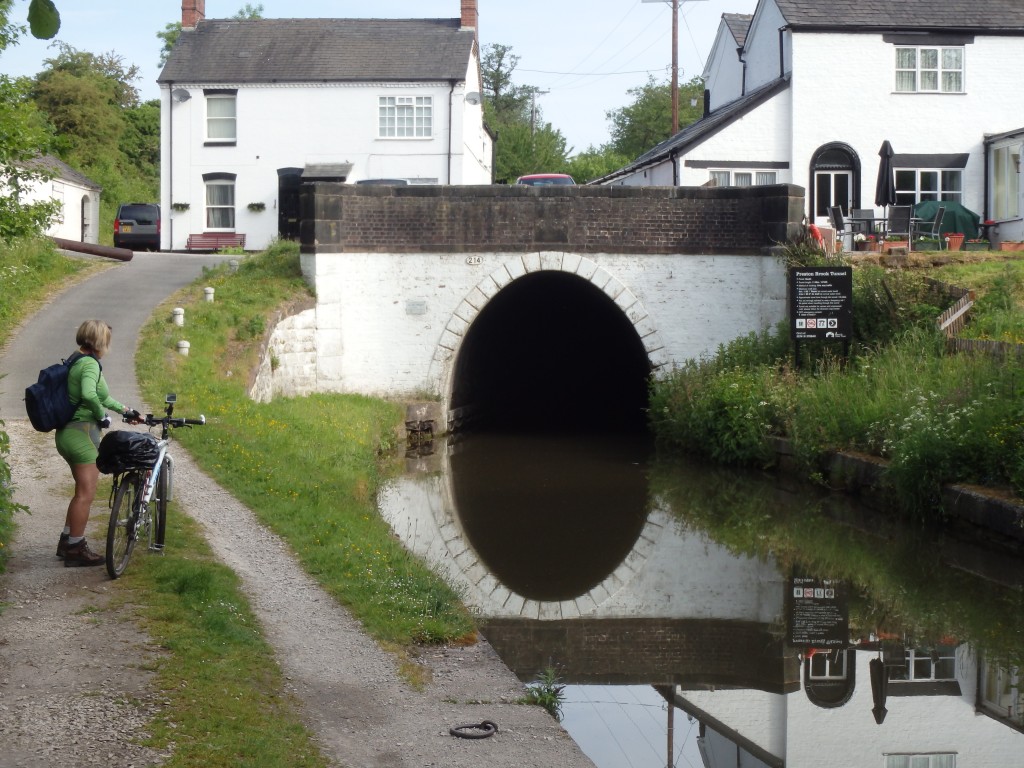 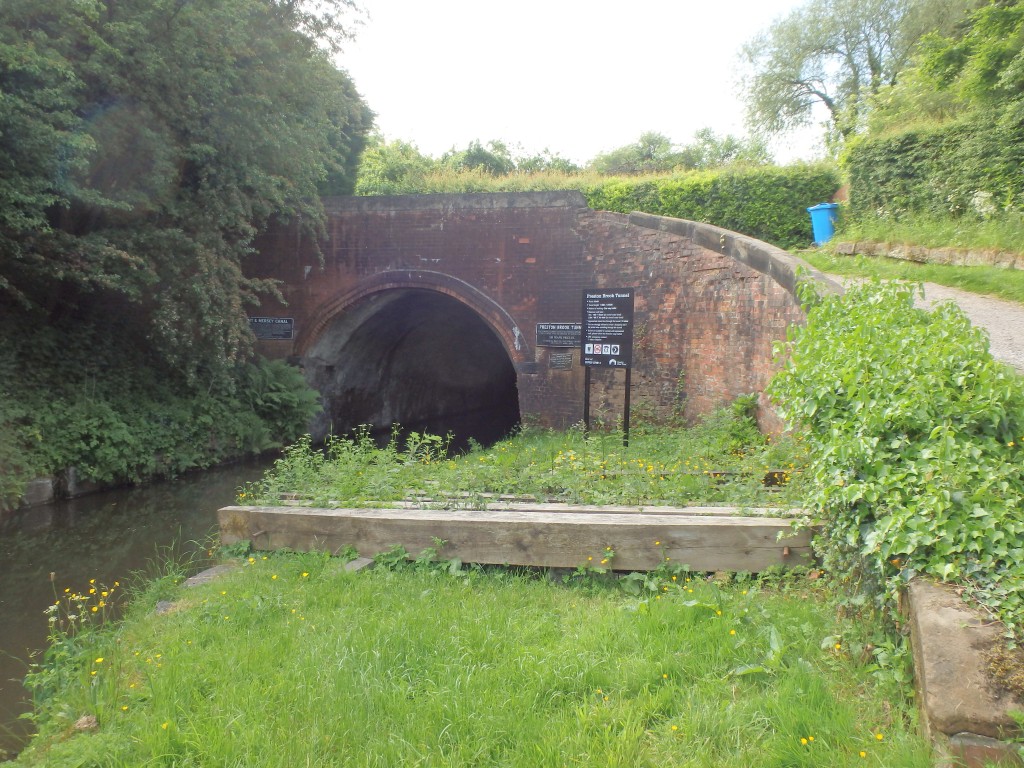 Back down the other side “Top Lock”

The path did now get better and when we finally were out of the grass we hit a straight stretch that must have been a few miles long… near the end of it we decided to stop and have a drink. The pub we stopped in was right on the canal and obviously the lunch stop for the local driving school. The learner cars just kept coming… I have to say I was very impressed to see that they all had what looked like a pint of coke, not a beer in sight. 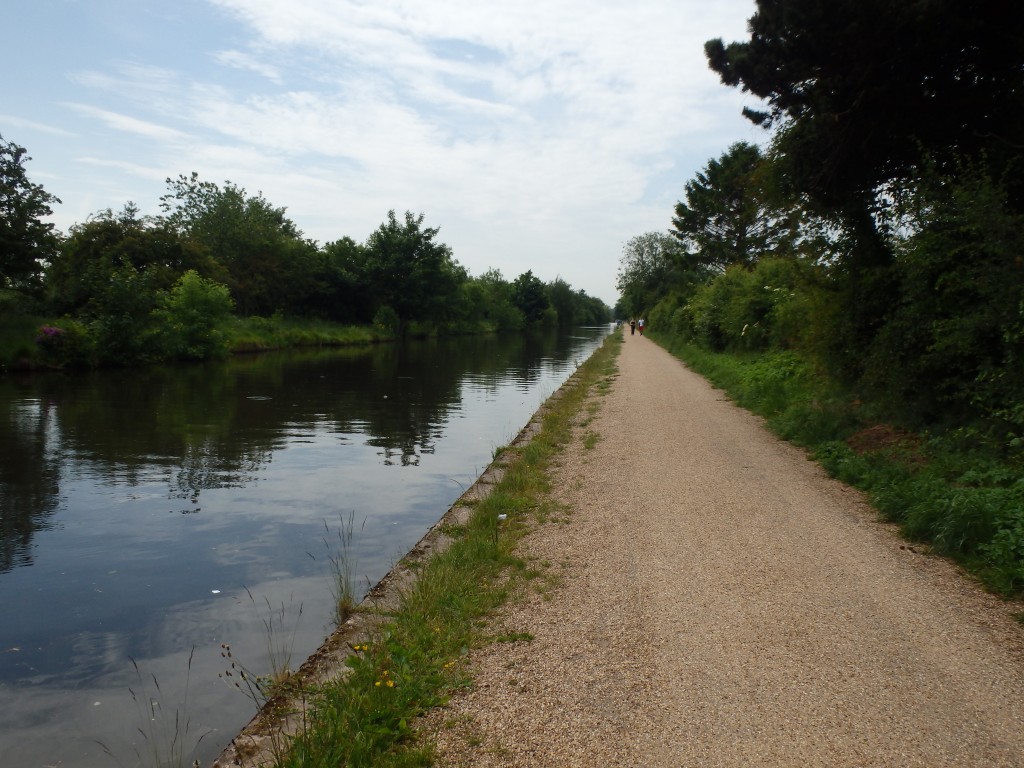 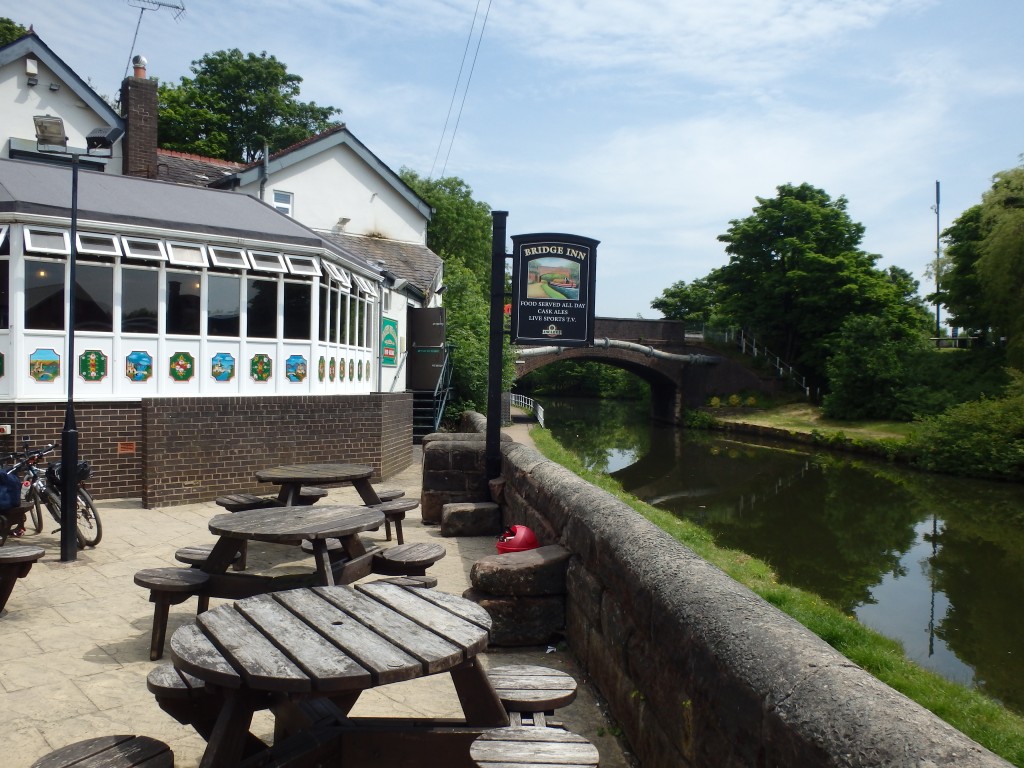 A quick drink….. Diet coke for me

Back on the path it was OK but some of it was very narrow, we came to the aqueduct where again we had to leave the canal as there was no path. Looking back at the swing aqueduct you have to admire the old engineers who came up with some very ingenious and practical solutions to the problems they faced. 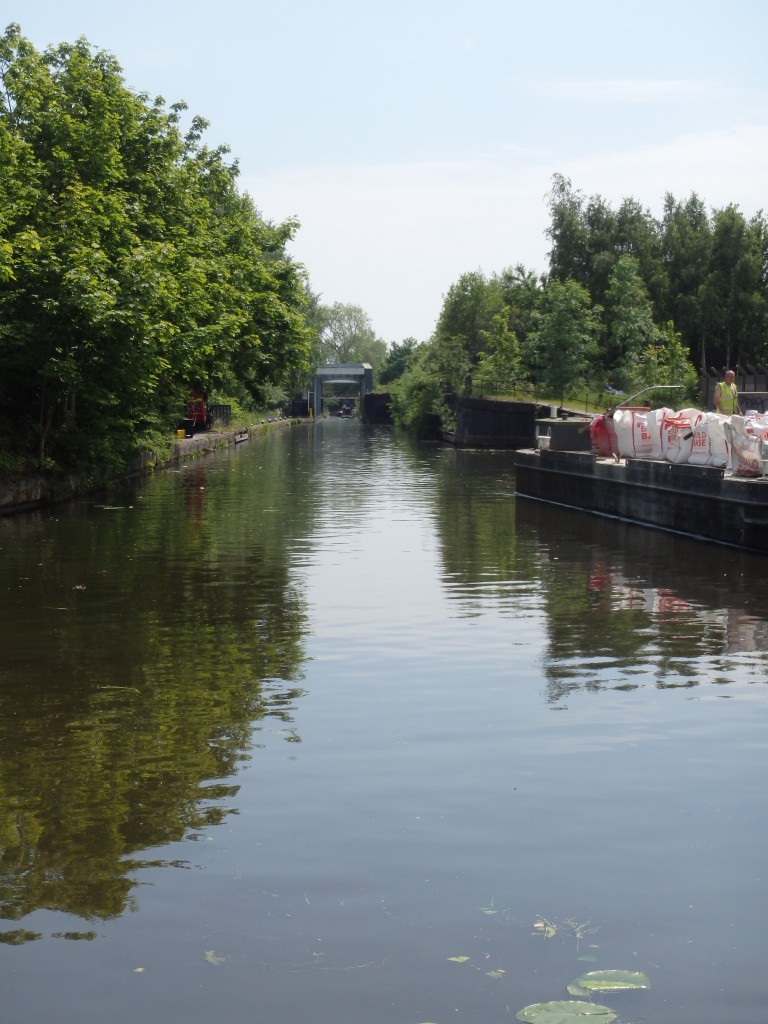 Looking back across the swing bridge aqueduct

Within half a mile of getting back on the path and Susan was actually quite pleased to come across another “Tow Path” closed sign. It had been very narrow and a little slip could have been quite wet This time we could see that there was no way past so we moved onto the road for about 400 m until we were past the obstruction, rejoining the path we went round the corner and arrived at another pub. This looked like a good stop for a late lunch so we parked up and ordered lunch, mango and chicken salad very healthy, no alcohol either. We had planned to meet Brian and April later (my brother and his wife) so I needed to keep all the alcohol spaces in my daily intake free…. I would probably need them later.

After what was quite a long lunch stop (how long can it take to make a salad?) we were back on our way to Leigh. 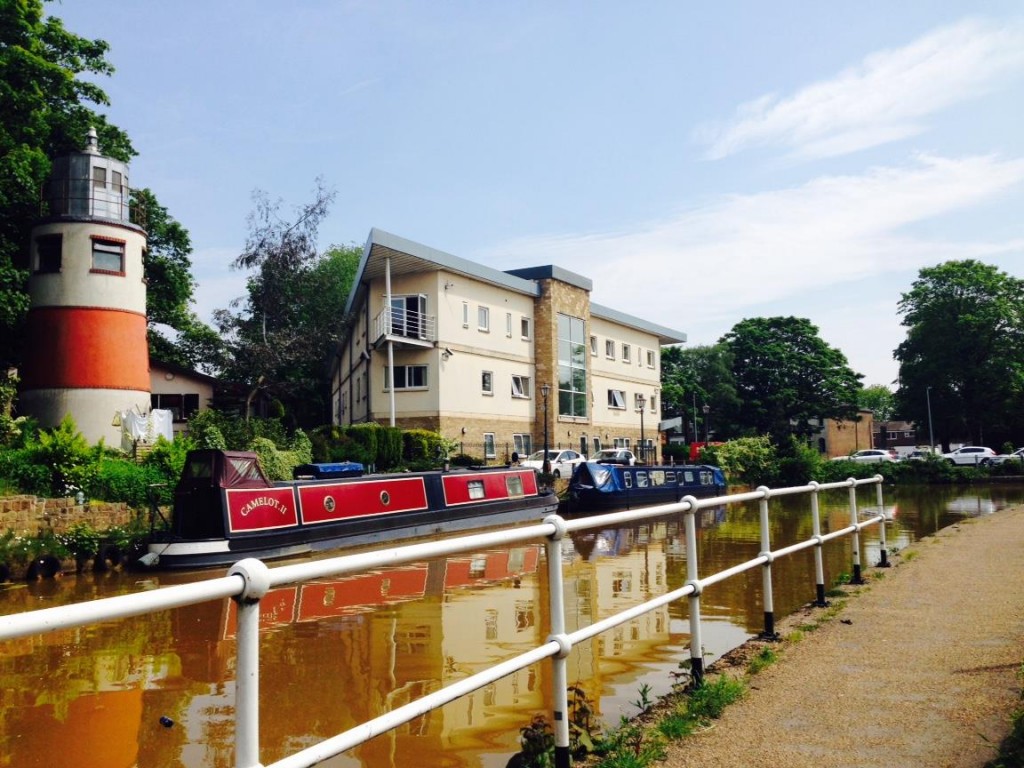 Light house on the canal…. view from lunch location

By now Susan was a little bored with it all and there were a few signs to our destination that took us off the canal but I stamped my feet and got my own way we stayed on it as far as we could. Even when we left it I took us down a dirty gravel path rather than down the road where Susan could see the hotel at the end. That was after all the deal as little road as possible…..

On arrival at the hotel we were pleased to see a modern place and because it was in a sports village they were used to “sports people”. I am not saying we are but when we asked if we could lock our bikes up anywhere secure the receptionist just said “it’s OK just put them in your room”.

We showered got all the gadgets charging and went to the supermarket to replenish our food /drink stocks (mango juice, a packet of sweets). We then decided we were really very thirsty so went to the local pub to wait for Brian and April… it was about 5 pm……..

Brian and April arrived at about 7 and we had both “had a few” by then so were feeling very jolly and pleased with ourselves. The weather forecast was diabolical for Saturday so we had a “few” more to fortify us for the long day in the rain tomorrow… Oh well only about 90 miles to go and we had been lucky so far.

It was Susan’s birthday on Saturday and Brian and April had kindly baked her a couple of cakes.. Apparently what is in them will be “good” for her tomorrow.

It was all too soon time for bed so we said our goodnights and off we went. As a footnote in the pub we bumped into Paul and Jill Haywood from the lab in Salford Keys they live “just across the road” we all say the world is a small place and Salford / Manchester / Leigh is a very very small place.