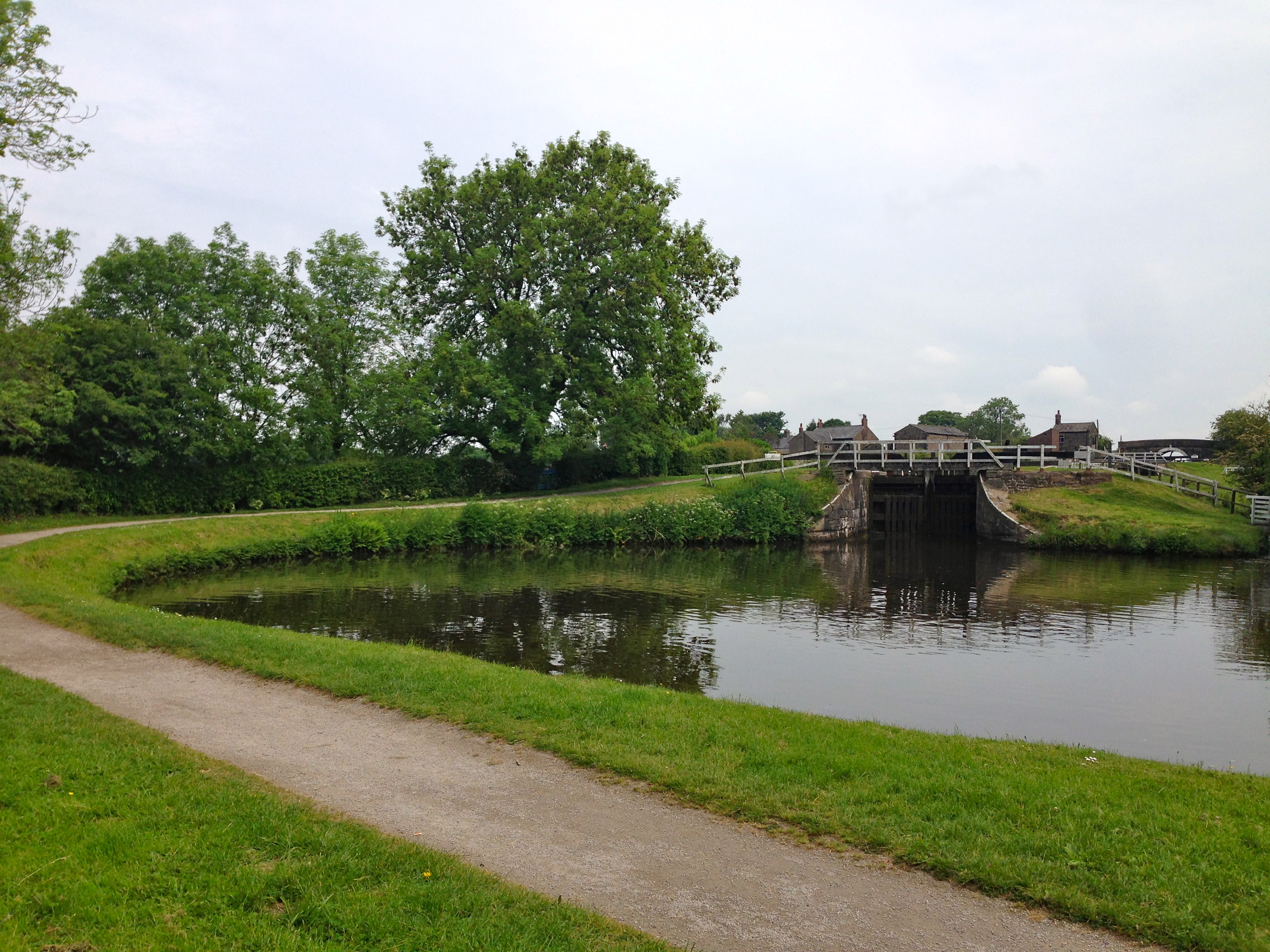 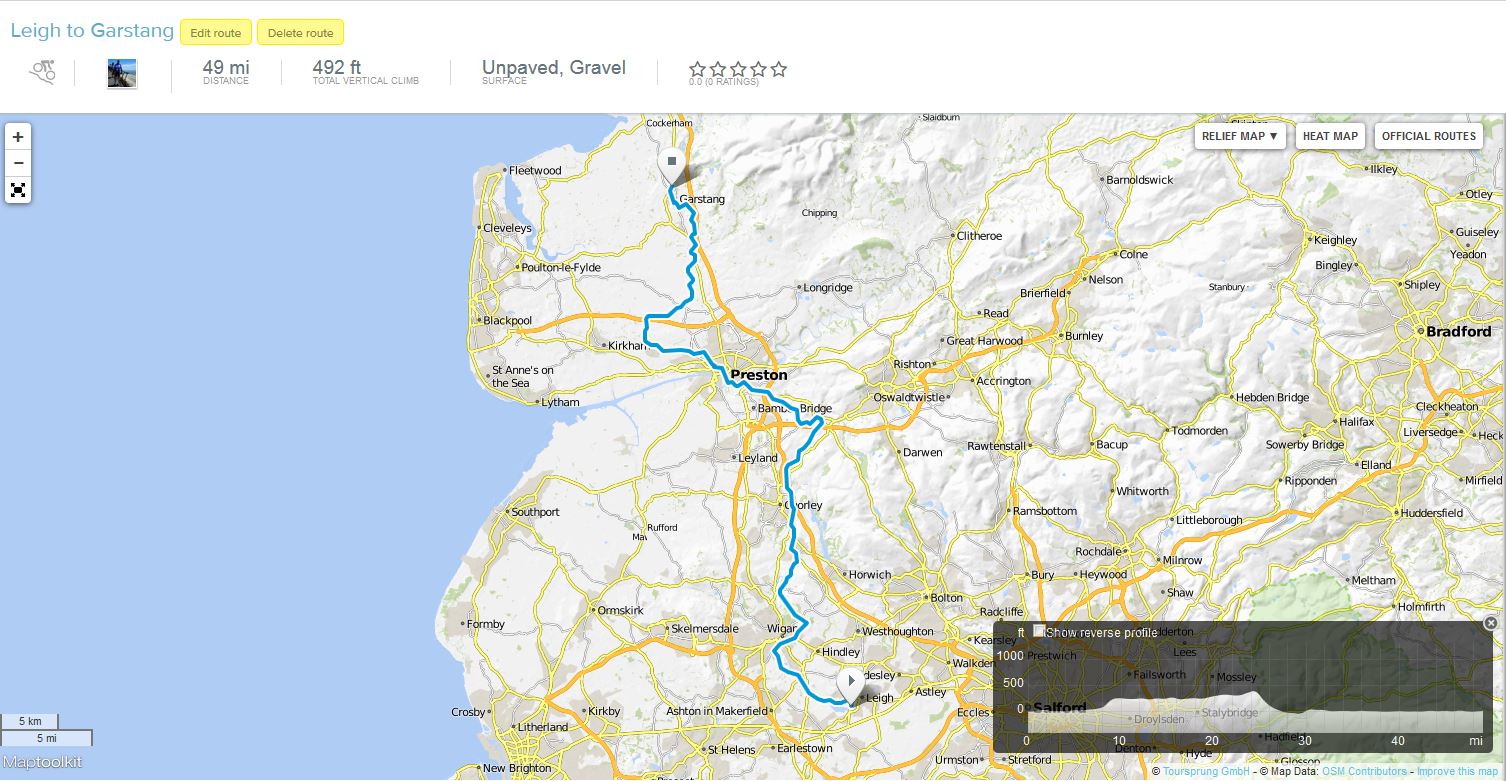 Today’s route as usual begins by retracing our wheel tracks back to the canal turning left towards Wigan through the locks then at a point near Preston / River Ribble we will leave the Leeds Liverpool canal and travel through Preston to the start of the Lancaster canal onto Garstang. It is again about 50 miles.

As usual we awoke early and as predicted the few beers the night before had not been ideal preparation although Susans wine and “cake” seemed to have worked fine. The weather forecast was for a lot of rain, thunder and lightning it was going to be a very pleasant birthday for Susan NOT.

Looking out of the window it seemed that the forecast had been correct it was pouring down, grey and miserable, what did we expect? We were near Manchester and everyone knows it always rains in Manchester (for me Doncaster has the same mental image, always very wet). We were all ready and packed as the bikes were in our room so we went down to breakfast. That turned out to be quite a scrum as there were 3 coaches of elderly people on their holidays all trying to get something to eat… I know I’m old as well but they all moved so slowly I thought I would never get a cup of tea and some toast. We made a couple of sandwiches’ that would do for lunch just in case we could not find anything on route. Actually as a Yorkshire man I like this option it saved us about £5

The fight for breakfast over we left the warmth of the lobby and as a small concession to the weather I agreed we could miss out the muddy path back to the canal and cycle through the car park. We were soon at the bridge but there was no way down so we did have to retrace some of the steps and muddy path, oh well I had tried for an easier start.

When we got back to the canal it was exactly the same place we had left the night before which strangely on the map on one side is called the Bridgewater canal Leigh branch but where we rejoin and turn left is labelled the Leeds Liverpool canal Leigh Branch. There is no discernible marker as to why the name changes here but I have checked on a couple of maps and they are both the same.

The start was wet and muddy but nothing like the previous attempt and again we knew that we were going into some major urbanisation where the paths would be better. We also knew that the Leeds Liverpool canal was a quite well travelled path as we had actually cycled the Wigan stretch before, there were going to be no surprises!

After a very short poor initial stretch which included a very cycle unfriendly gate we were on a smooth flat hard surface which took us all the way to Wigan which was about 12 miles, if only it had all been like this. As another bonus it had actually stopped raining and the sun was out, thank goodness that the UK weather forecasters are so poor. 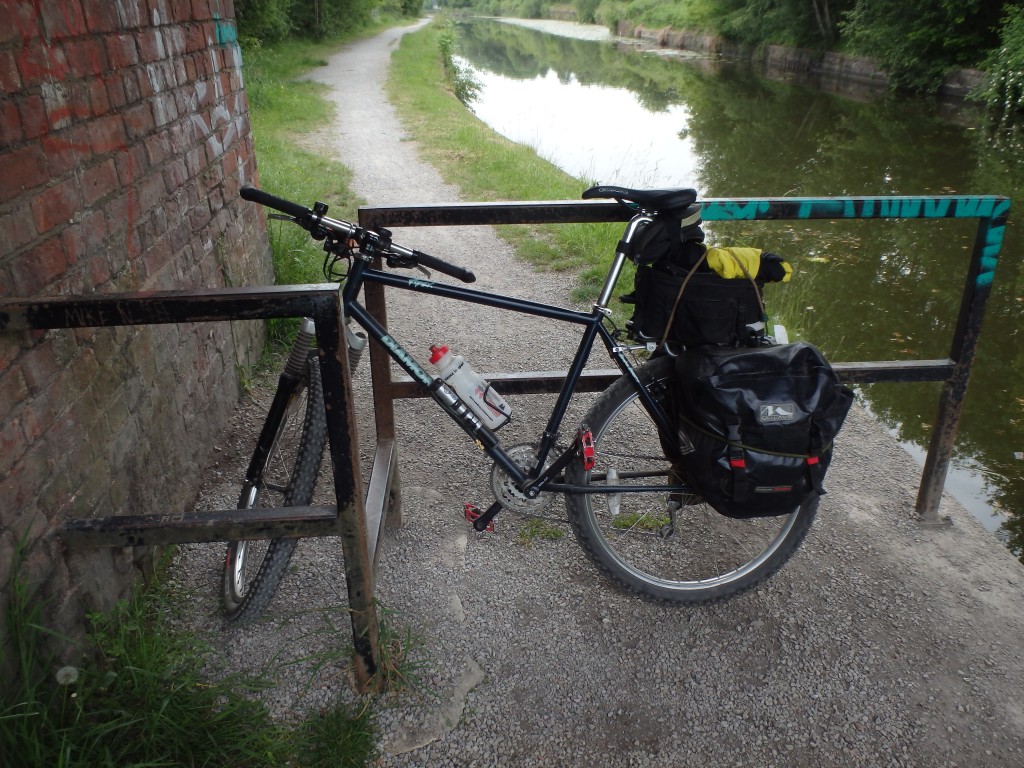 This is not an easy gate.. bloody impossible to get my bike through it without a heavy lift

Into Wigan we arrived at a sharp right turn over a bridge that got us on the Leeds Liverpool Canal proper we actually did remember this bit but with that memory came the recollection that there were a lot of locks coming up. Reaching the locks they did not seem as bad this time but on the previous trip we had been at the end of a long hot day whereas now we were quite near the start. On reaching the “top lock” we knew there was a loo and a sharp left turn onto a gravel lumpy path, it had been easy so far so no complaints from us.

Getting onto the Leeds Liverpool canal “proper” 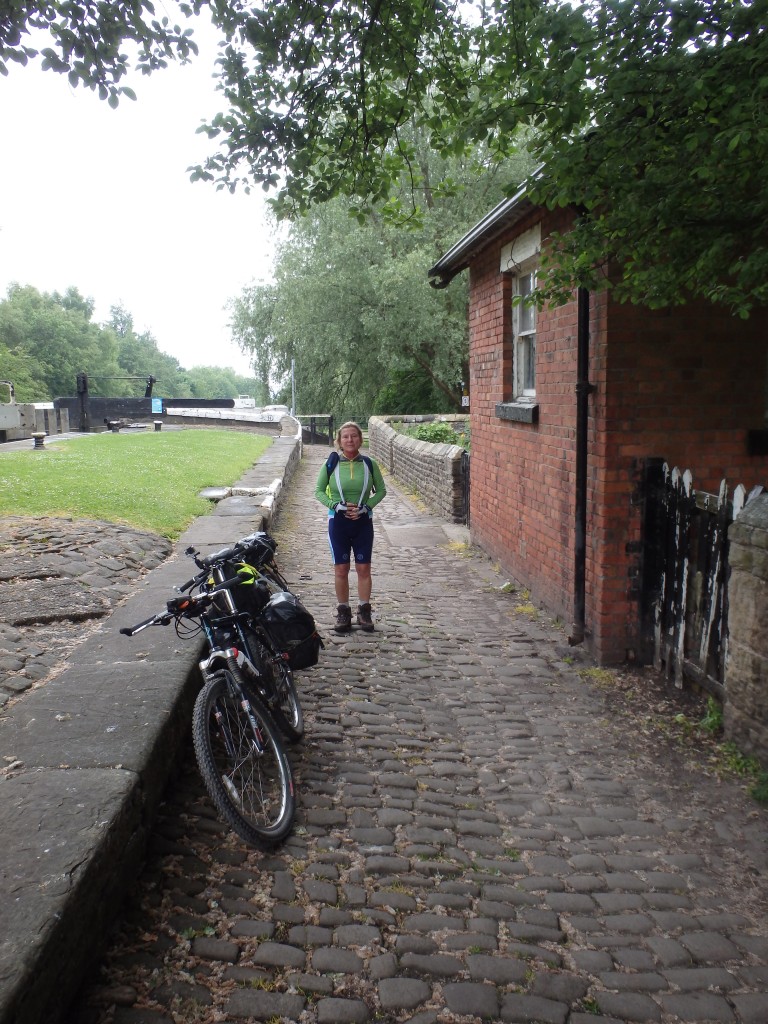 The only hazards for the next 10 miles were gates (BOLLOCKS), some deep rutted sections and of course thorns (more BOLLOCKS), yes another puncture for me!

At the A675 we left the canal and turned west onto the B5256 which we followed until we came to a country lane that took us towards Preston where it rejoined the A675. To avoid as much traffic as possible we turned left on the north side of the river Ribble along a very leafy road into a Avenham park where we spotted the Pavilion cafe where we stopped for lunch. During lunch it started to rain but it was a lot of dark grey sky and worry for nothing, as quickly as it started it had stopped again. 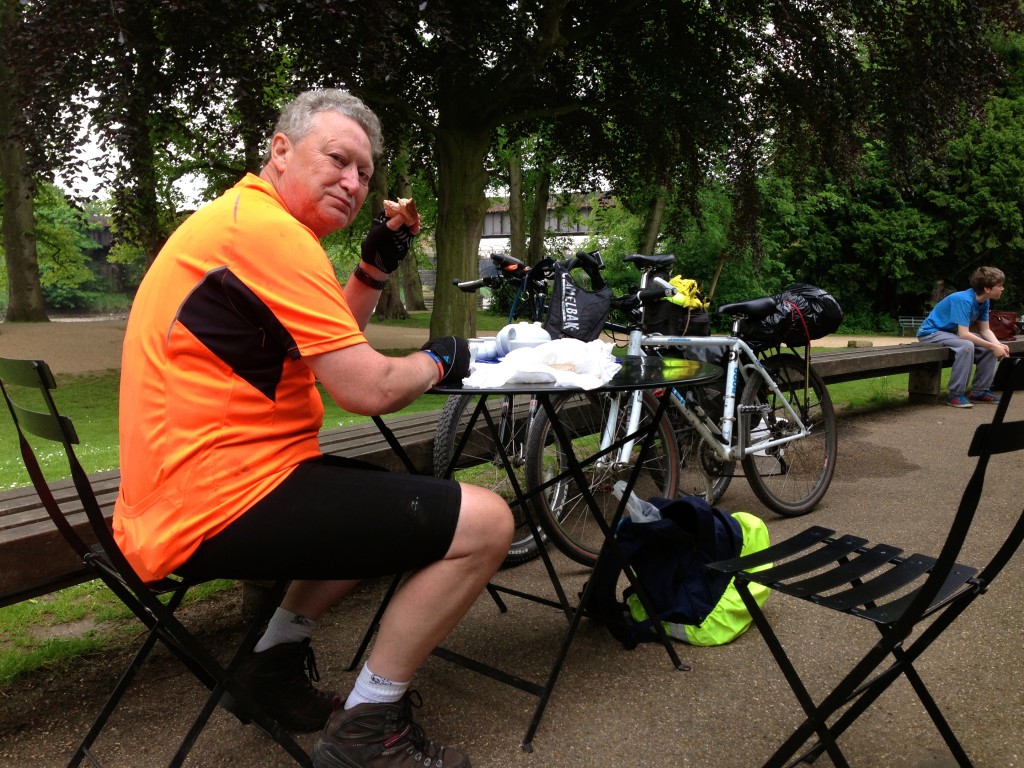 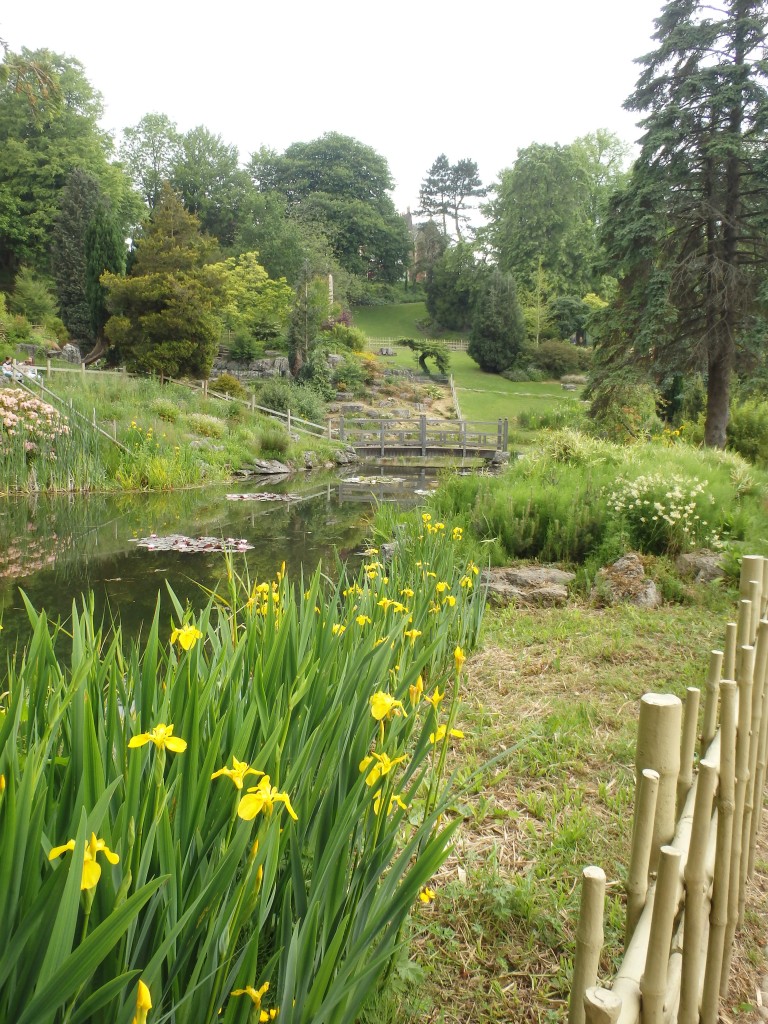 Leaving the cafe we pushed our bikes up the VERY steep hill to the top of the park then after negotiating the shopping centre we got to the start of the Lancaster canal. We had been here before on a recce but it was still good to see the sign Garstang 16 ¼ miles probably another 3 hours with stops and a fair path. 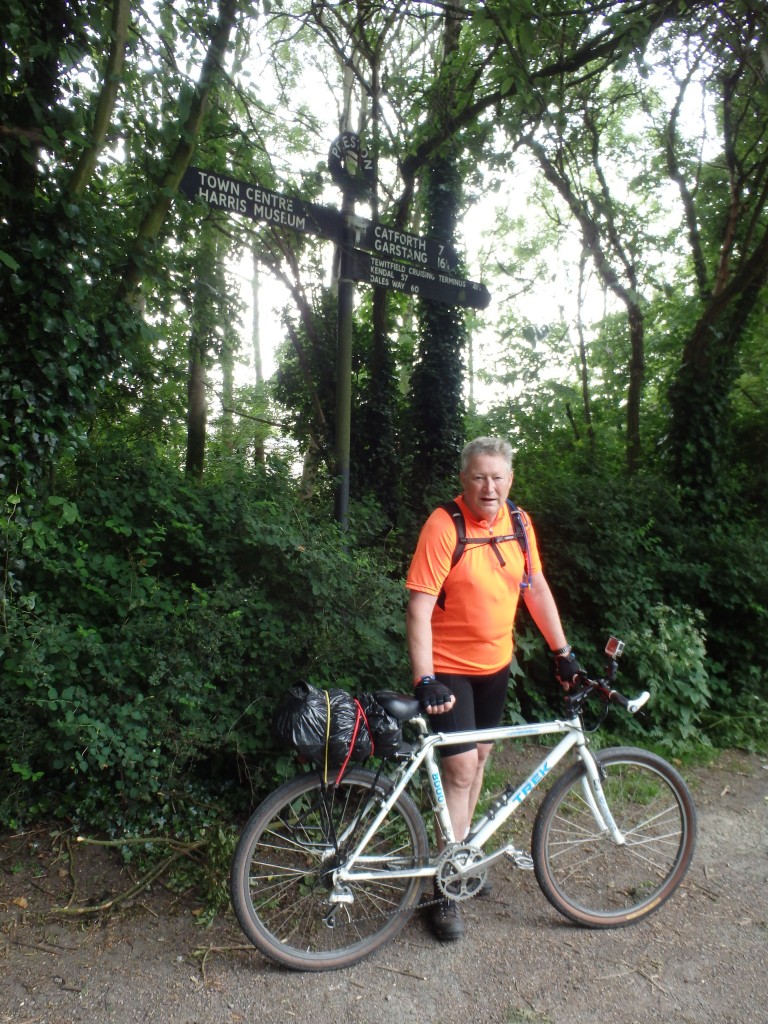 Start of the Lancaster canal

Well it wasn’t a fair path it was as bad as we had seen anywhere, this part of the canal network is definitely not well traveled, there were even very few boats. This canal connects to nothing by water so anything on this had been trapped forever. Back to the path, there were brambles, uncut grass, cut grass, gravel, mud yes you name it we had it so progress was slow. 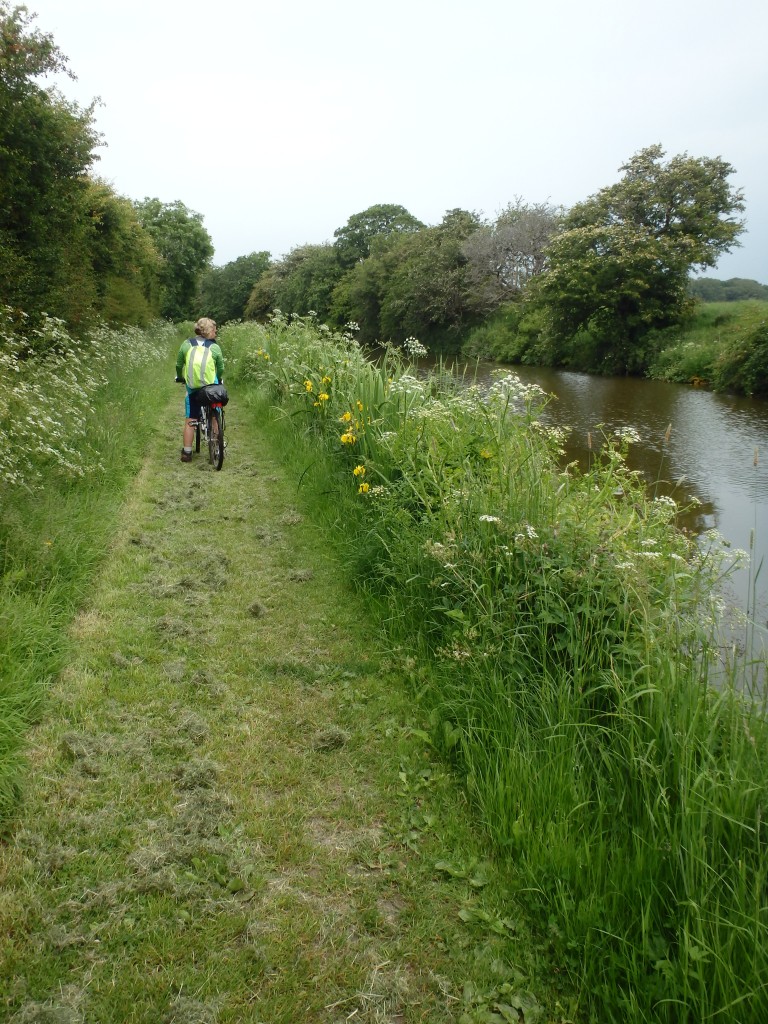 At least the grass had been cut.. it was lumpier than it looks

At this point I had made a small error in that I had turned off the SatNav and put it in our luggage as I really did not want it stealing off my bike. Out of all our equipment after the bikes this was the single most important item. In my memory the hotel was about half a mile away straight down the road on the right. We had actually left the canal about a quarter of a mile early to replenish our drinks so actually I did not know exactly where we were in relation to the hotel. With the usual bullish male attitude we asked for directions that I did not listen to and we set off to follow them. Susan was a little tired by now so she “suggested” I check that we were going in the right direction, using my iPhone I did …. It said we were 6.5 miles away. Now no degree in rocket science is needed to work out how Susan felt about that statement , balloon and lead instantly spring to mind (the slang words for sex and the place your poooh comes out of were a close second, first word begins with “F” second with “A”, come on its easy). I was absolutely certain we were not that far away so got the SatNav out loaded the route… lucky Mick (or more accurately correct Mick) it was about half a mile away.

The end in sight we arrived locked our bikes up in the function room and went to shower. The room was a little dated but we didn’t care warm water and clean clothes are all you need after 50 miles on a bike, a little cream on the bum can be quite welcome as well! I called Raife who was meeting us for a beer and dinner to let him know we had arrived, he kindly offered to book us a table in The old tith barn while we cleaned and disinfected ourselves to make us suitable company for the general public.

With all the gadgets charging we booked a taxi to take us to the pub where Raife was already waiting, we arrived a little sooner than expected as he was hastily writing Susan a birthday card. It’s the thought that counts and she was really thrilled that he had gone to the trouble.

After a very hearty dinner with beer and wine Raife pulled the final surprise he had brought a cake and candles. Now I’m certain many ladies would be not happy spending their birthday cycling 50 miles in the rain, mud, heat etc but Susan will never forget this one……………. 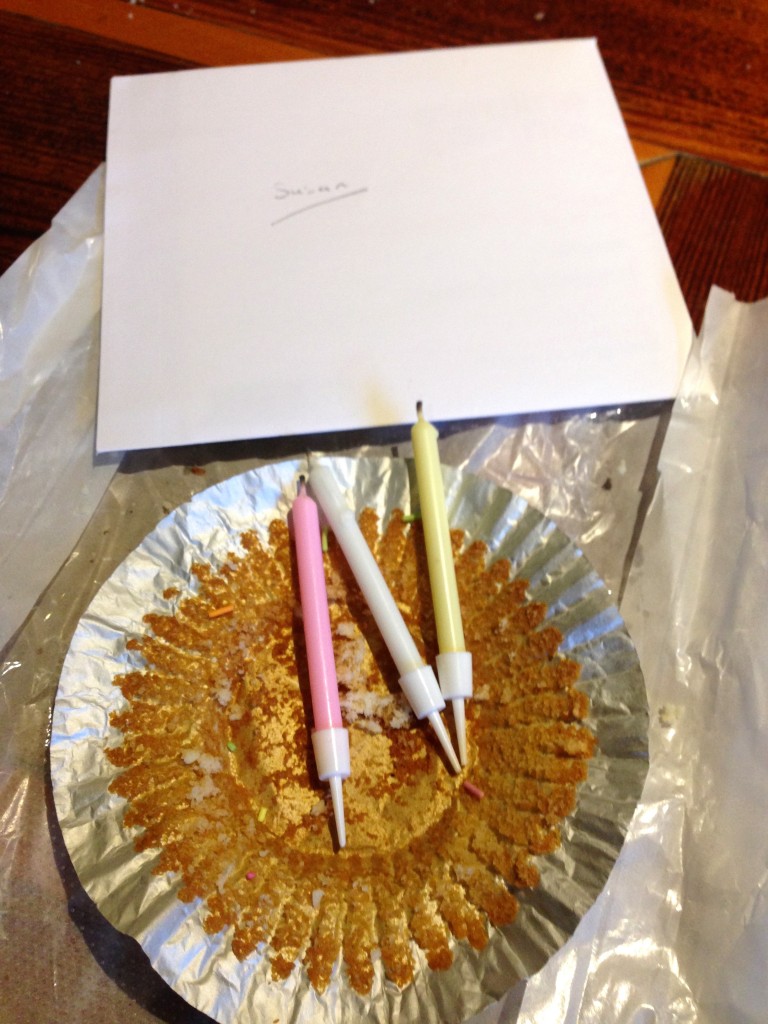 The cake was devoured before we could photograph it

There was “only” about 40 miles to go tomorrow so we again had an early night as the plan was to leave at about first light on Sunday … 5 am. We wanted to be in Kendal with plenty of time to meet Nigel for a beer or two…. No milk for me at the end of this its beer, wine, G&T……….. maybe another beer…….