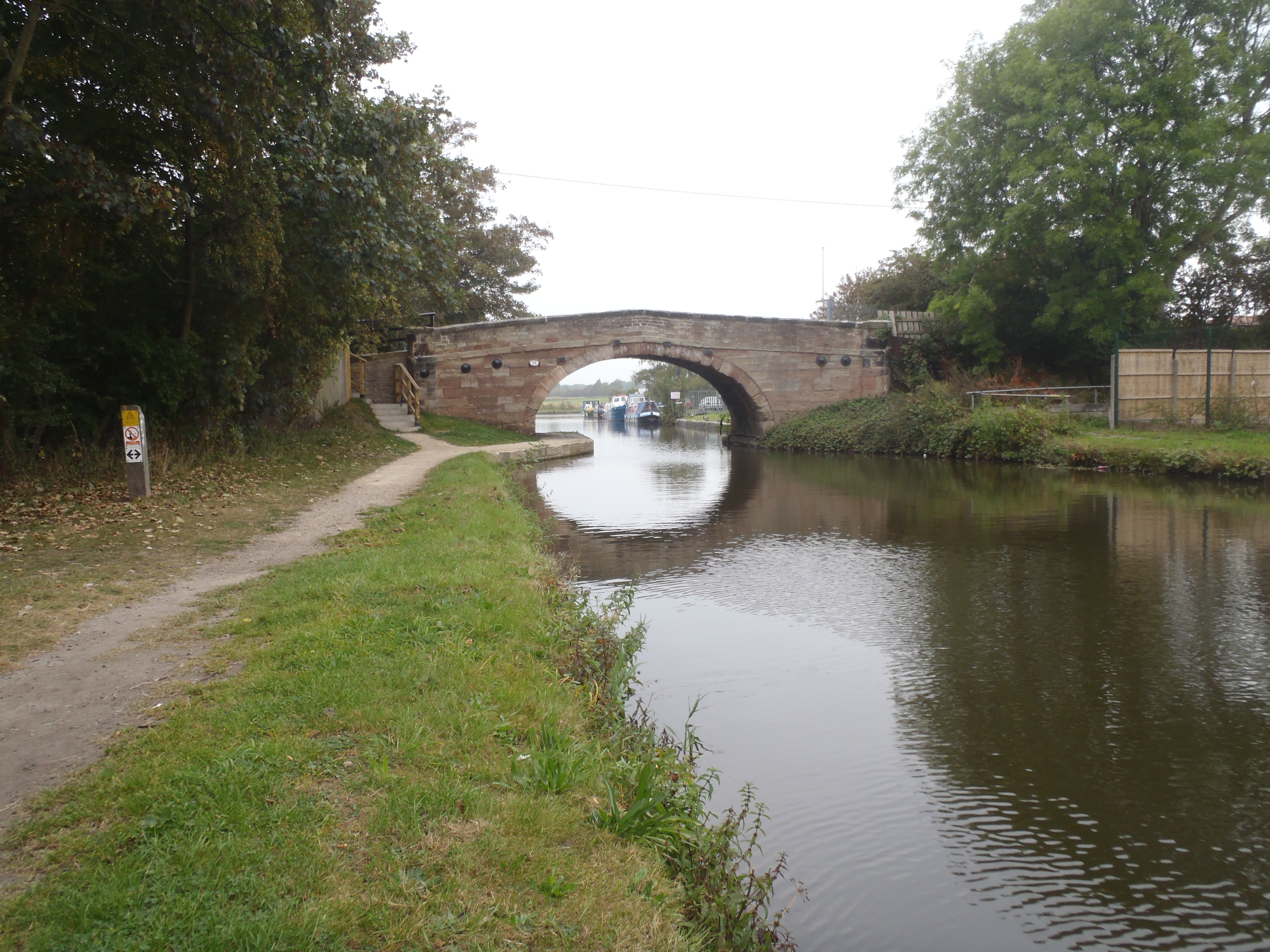 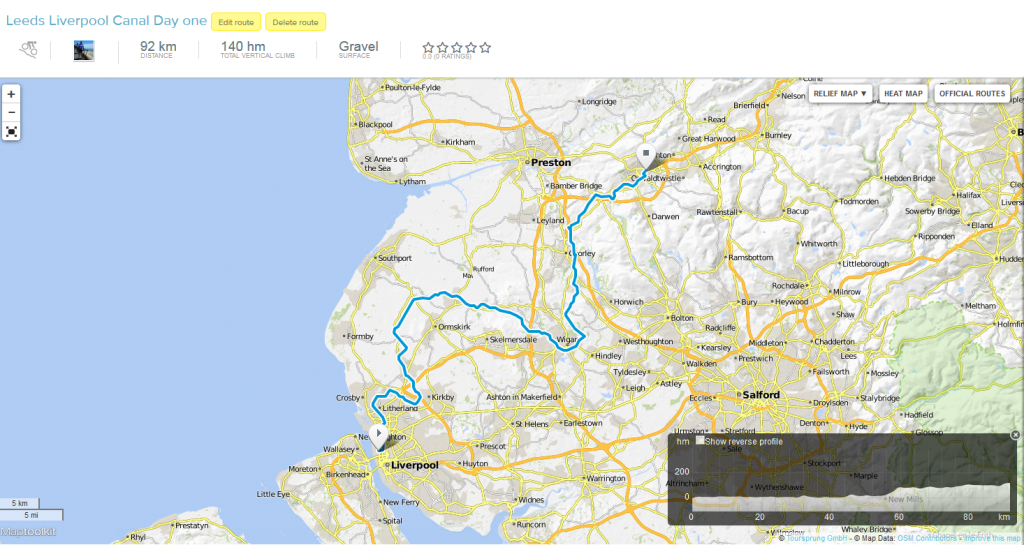 Neither of us slept very well that night the fear of sleeping in and missing the start probably weighing on our minds (or maybe it was the crap beer pouring through me). Long before the alarm went off which was set for 5 am we were up and dressed in our cycling gear. Final packing was completed and I hung the by now quite heavy panniers on the rear rack. I have never cycled with luggage before so this was going to be a little different to my usual bomb along the local canal in Hampshire. Susan had all the food and some water in a small rucksack that she had decided to carry instead of using her rear rack. I was carrying a Camelback with my water for the day.

Leaving the room we pushed our bikes along the striking corridor which the GoPro fitted to Susan’s bike recorded. There was no room on my handlebars for it with all the other technology, Heart rate monitor, Garmin GPS and the bell. We then hit our first minor problem our bikes would not fit in the lift. This was not a problem the night before as the front wheels were removed. Lifting my bike onto its rear wheel I immediately felt how cumbersome it was with the back end carrying the extra weight, oh well only 74 miles to go! 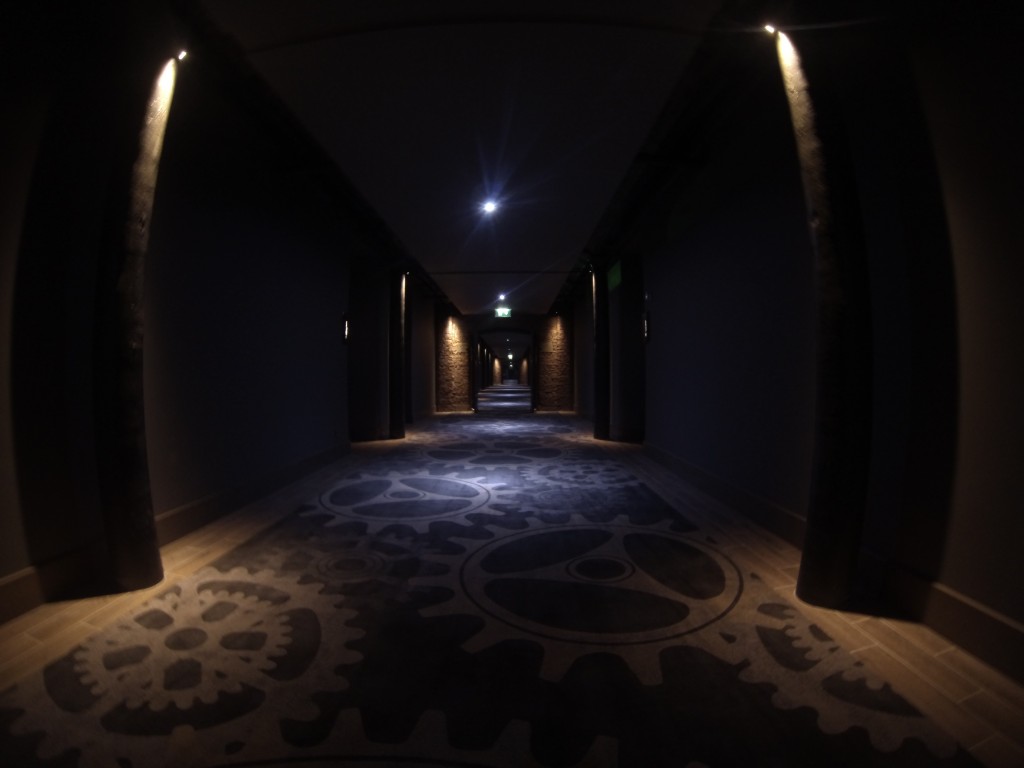 The corridor in the Titanic Hotel

Leaving the hotel before dawn was quite a strange experience and we set of to find the start of the route. 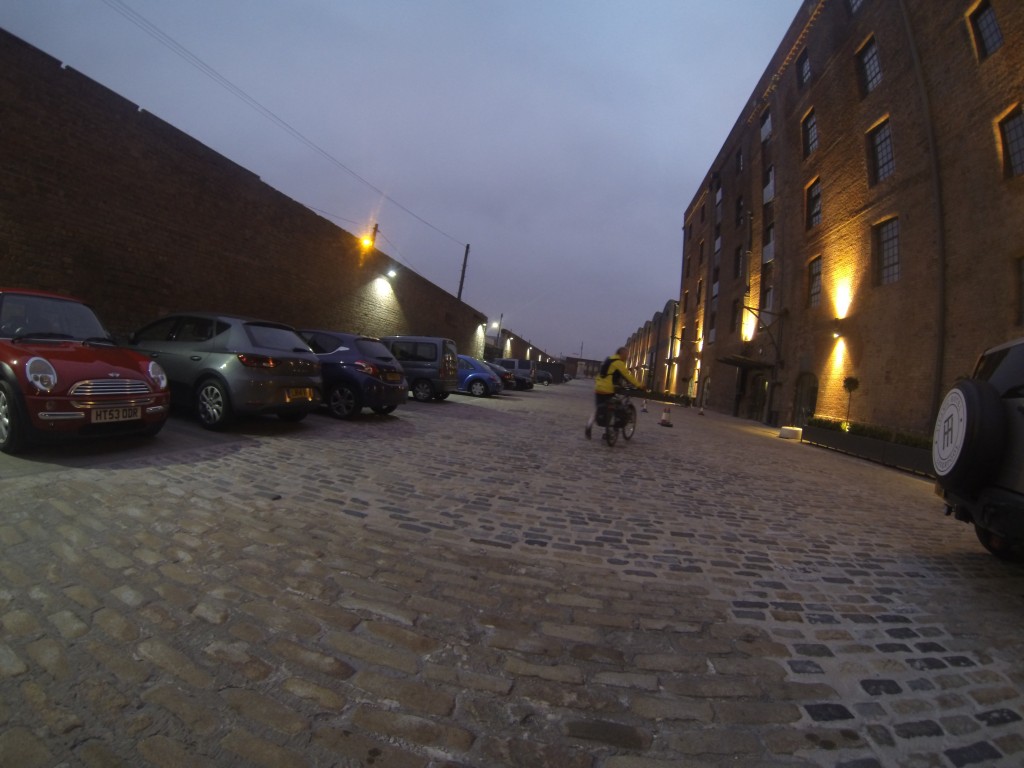 Leaving the hotel at dawn

Following my GPS I cycled straight past the start, Susan being a little more awake than me spotted the large painted arrow on the pavement pointing at a gap in the wall where the route started. 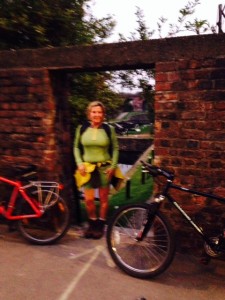 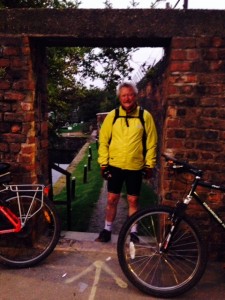 Notice the large arrow on the pavement  indicating the start…

We stopped took photos and pushed our bike down to the canal tow path… no point getting on yet as the path immediately crossed to the other side with we could only get to by crossing a very narrow bridge, Bloody hell my bike felt heavy as I carried it up the stairs and across the bridge. Finally we mounted our trusty steeds and we started to cycle. The weight on the rear although still there was not quite as noticeable when I was actually peddling rather than pushing.

The path was good, quite wide and a mixture of Gravel and Tarmac so we were making quite good time. We had decided to stop every hour just for a few minutes just to grab a bite of food and take on some water. My LEJoG experience had taught me little and often was the order of the day and it gave us a chance to straighten our backs.

We started meeting the odd cyclist coming the other way and dog walkers were already starting to pick up theirs dogs shit in little black plastic bags… these are strewn along almost the entire length of the canal. One cheery cyclist seemed to confirm what we had read which was it was quite a good path until Gargrave near Skipton where it deteriorated but we would worry about that tomorrow that was 90 miles away…

The GoPro was taking a picture every 10 seconds and after a few hours we changed the battery and set off again. At 24 miles the “Rugged” GoPro shot off Susan’s handlebars onto the cobbled floor when the new mount that David had just bought snapped! Oh well how many pictures did we need of a tow path. We had over 800 when it fell off most of which will be deleted after I complete this stage of the blog 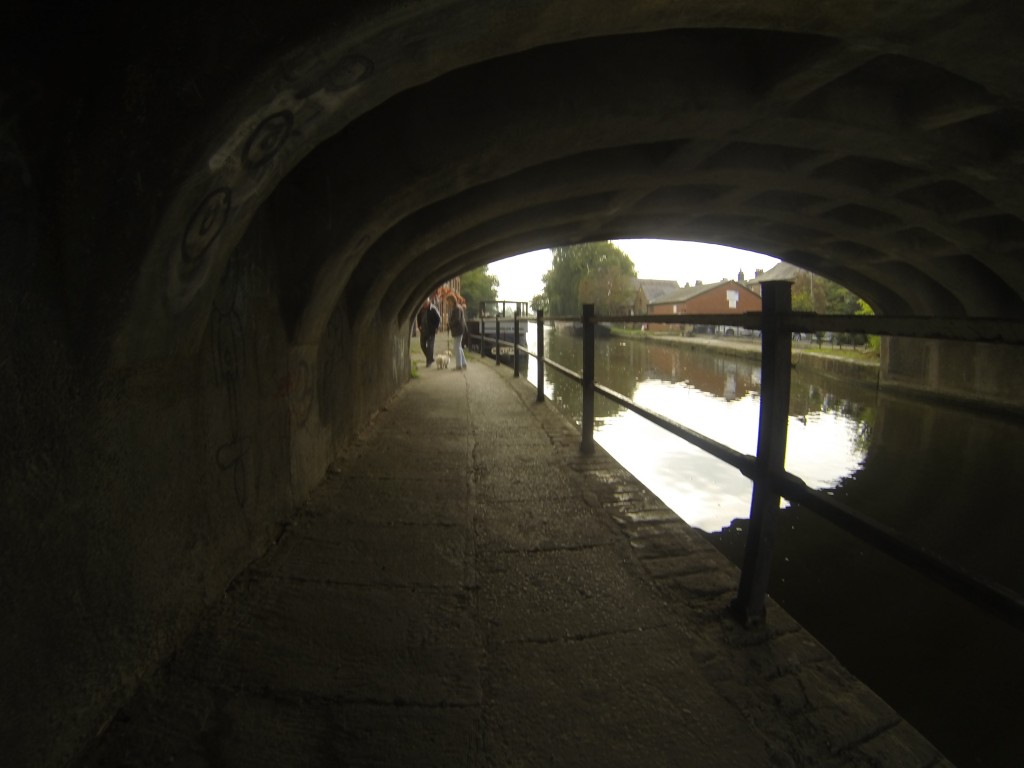 The next to last picture the GoPro recorded… 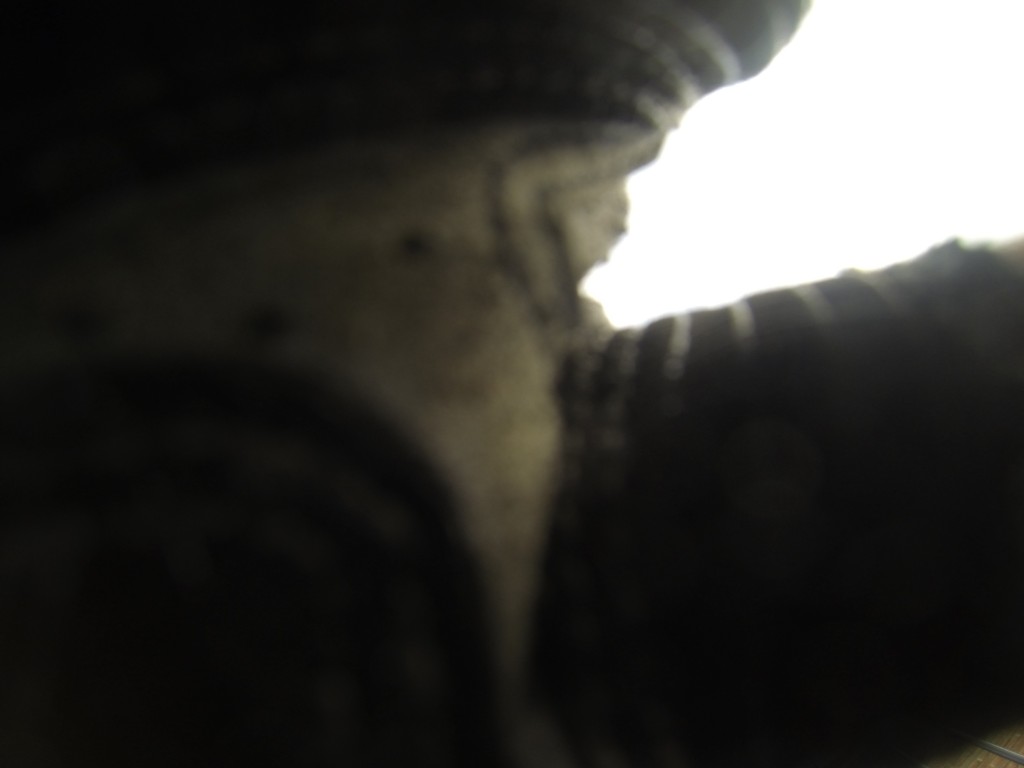 The GPS was working really well I had uploaded the details off all the bridges on route and more importantly the pubs and it was very satisfying seeing our progress on the little screen. I had even downloaded some helpful notes that said things like “Low Bridge”, “slippery Cobbles” etc “forewarned is forearmed”. They did not help a lot as we negotiated the slippery cobbles quite easily then Susan managed to stumble off when we were safely back on the good path catching her heel on the saddle as she dismounted. A heavy bang to the knee and a bit of wounded pride I suspect. So she did not feel too bad I managed to fall off myself a couple of miles later…

It was all going quite well we stopped regularly took photos and were soon on the outskirts of Wigan where we came across the most bike unfriendly bike gates I have ever seen. The guy in front of us on a lightweight racing bike just lifted it round the gate suspending it over the water and went on, NO CHANCE of me doing that with the weight I was carrying. The top of the gate is too low and the stupidly designed “V” to push your bike through will not allow the panniers through. Again it was lift it onto the back wheel and really struggle to get round the special bike “friendly” bit, absolutely the worst bike gate I have ever had to use. 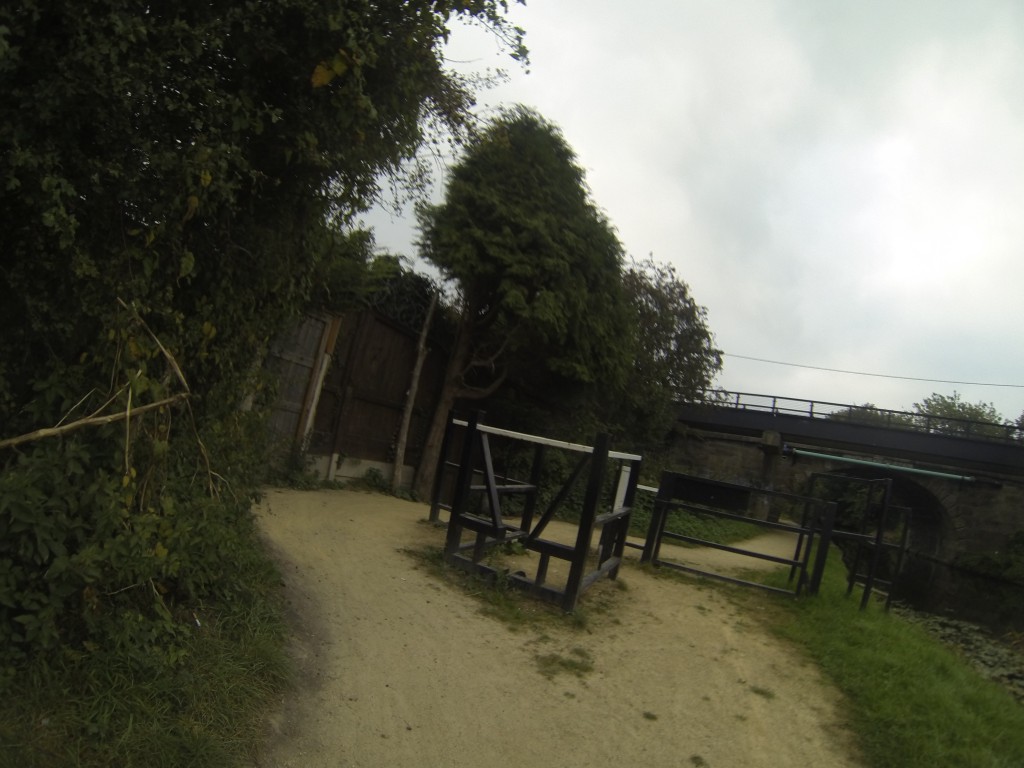 This gate is the same design but here it was obviously very easy to go round, I was too busy struggling with the bike in Wigan to take any pictures.

Eventually we reached the top lock at Wigan quite hard work to get there but we rested briefly at the top and looked back on a job well done it was flat all the way to Burnley…….. 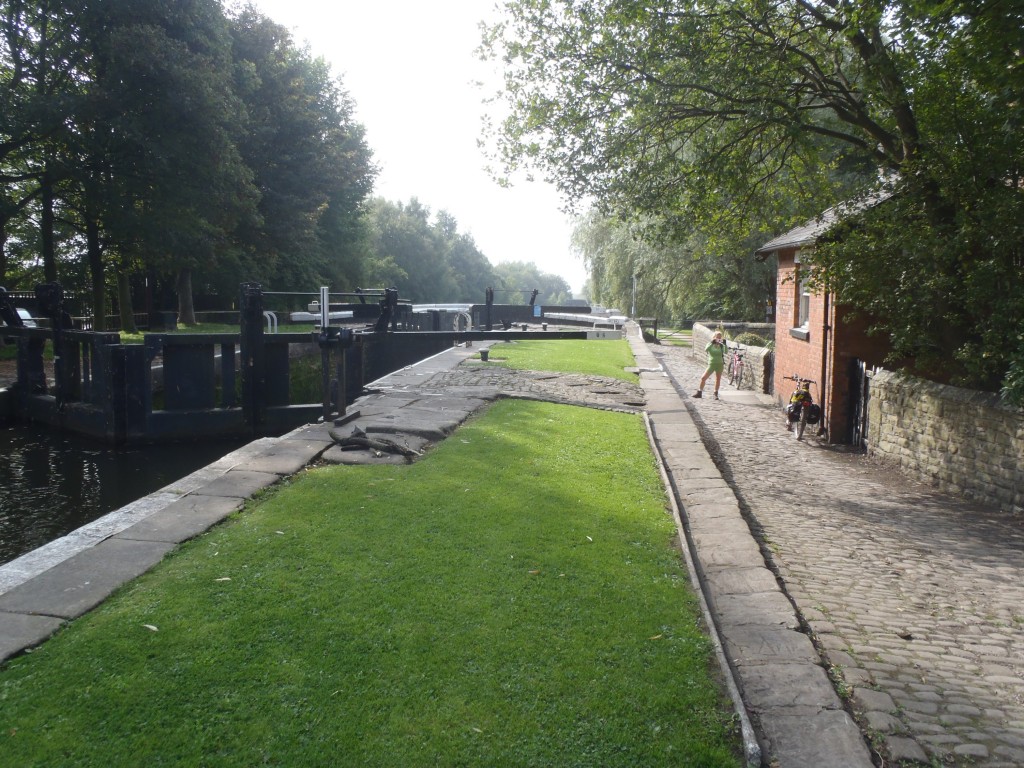 Looking back at the top Lock at in Wigan

Time was starting to get a little critical and Susan was flagging getting slower and slower eventually coming to a stop discovering she had  a puncture to the front tyre. We fixed it reasonably easily but it was clear we were not going to make the 74 miles today unless we rode until dusk so we hastily worked out that we would stop in Blackburn and make a new plan for the rest of the trip. We looked up local accommodation and plotted a route to the nearest hotel. On arrival at the hotel location we discovered it had closed down… B**tard Sat nav out of date.

After  both of us ringing  round Susan managed to book us into the most expensive hotel in Lancashire… to be fair we had tried about 5 or 6 by the time we settled on the idea of “just lets find a place to sleep”. During our search for a bed I had noted there was a cab company close who had minibuses so we booked one to take us and our bikes the 6 miles to the Stanley House Hotel http://www.stanleyhouse.co.uk/

The “Disco Taxi Minibus” arrived complete with disco lights a smoke machine and a SUB in the boot that made it hard to get my bike in. Our driver was a very cheery chap who was so proud of his taxi he gladly posed for photos, Susan’s bike is inside! 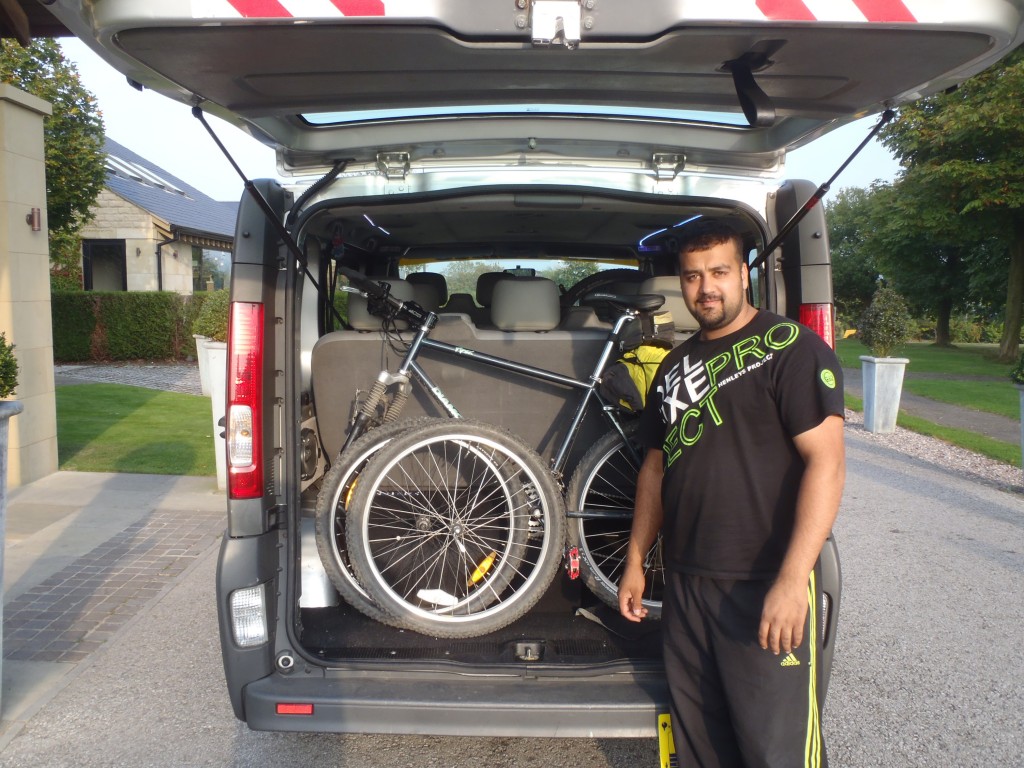 When we arrived even though we were not dressed like the usual clientèle we were made most welcome and were soon locking our bikes in the laundry room and heading for the shower before dinner .

Suffice it to say dinner was fabulous and not at all what we were expecting as we were supposed to be in a pub in Burnley. A couple of pints and it was bedtime. It had been a VERY hard day hot dusty and 60 miles on sometimes very rough tracks had not been easy. To be honest I was a little disappointed we had not made the full distance that day but over dinner we had made a new plan that meant we would stay in Gargrave overnight on Friday and then continue into Leeds on Saturday all was not lost and I was pleased with our quick thinking and resourcefulness. So far it had been a great experience but we had bitten off a little more than we could chew, the really good news was that we had a firm achievable plan and would allow us to easily manage the rest of the trip.

I think the spike in Heart rate was when Susan went to buy a coke, they only sold “ORGANIC” Coke so Susan said that will be OK they said that will be £1.80…. I’m sure you will agree that for a Yorkshireman that is shocking! 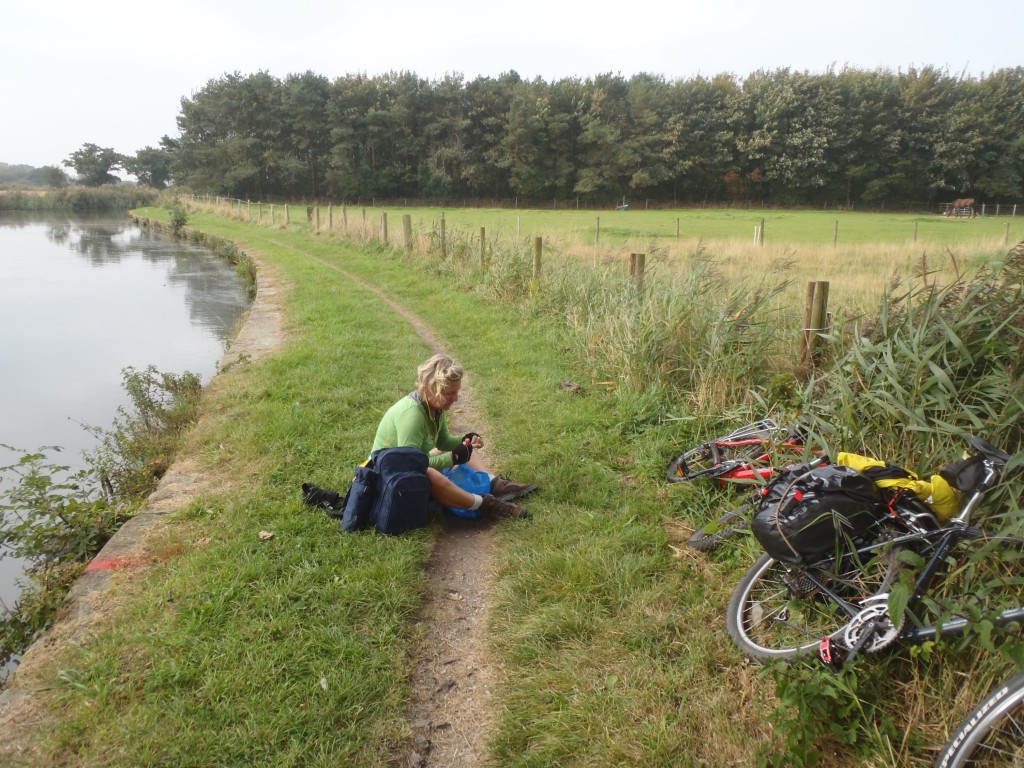 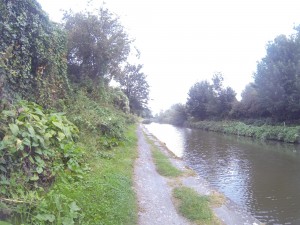 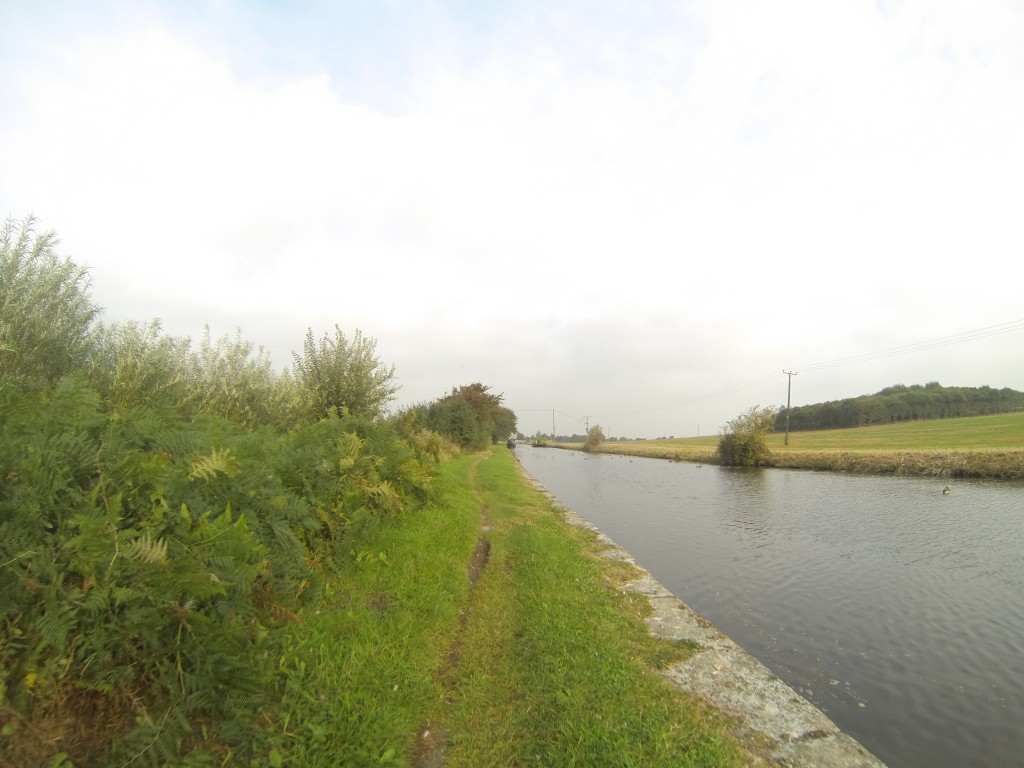 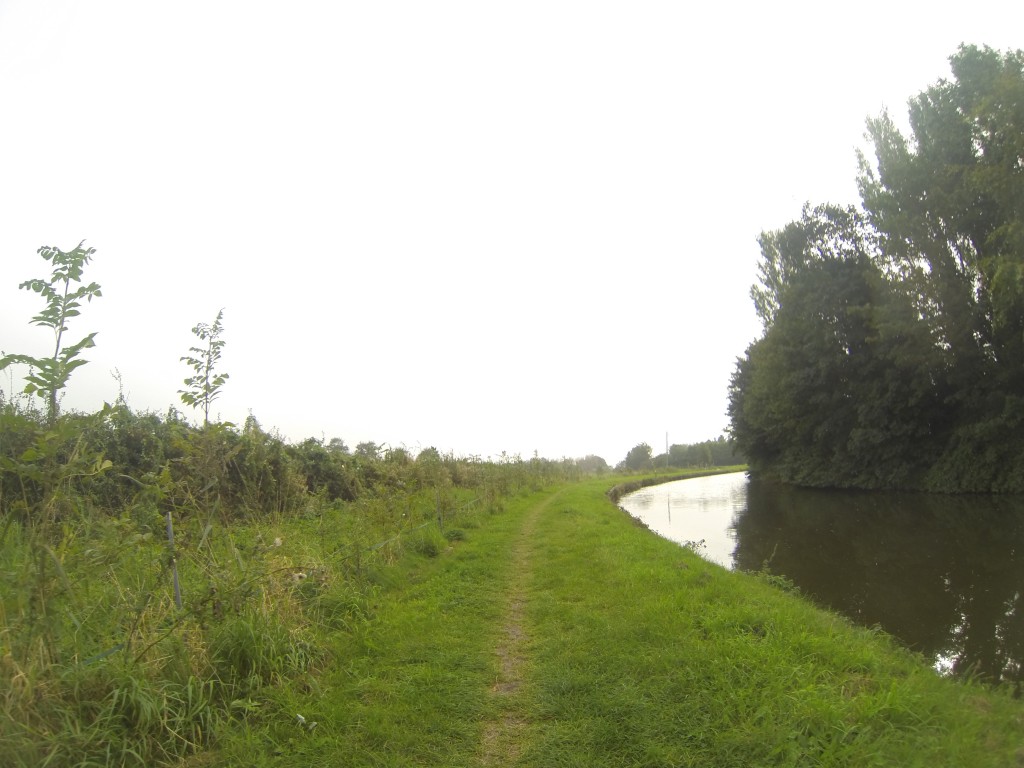 The quality of the tow path varied “quite a bit”