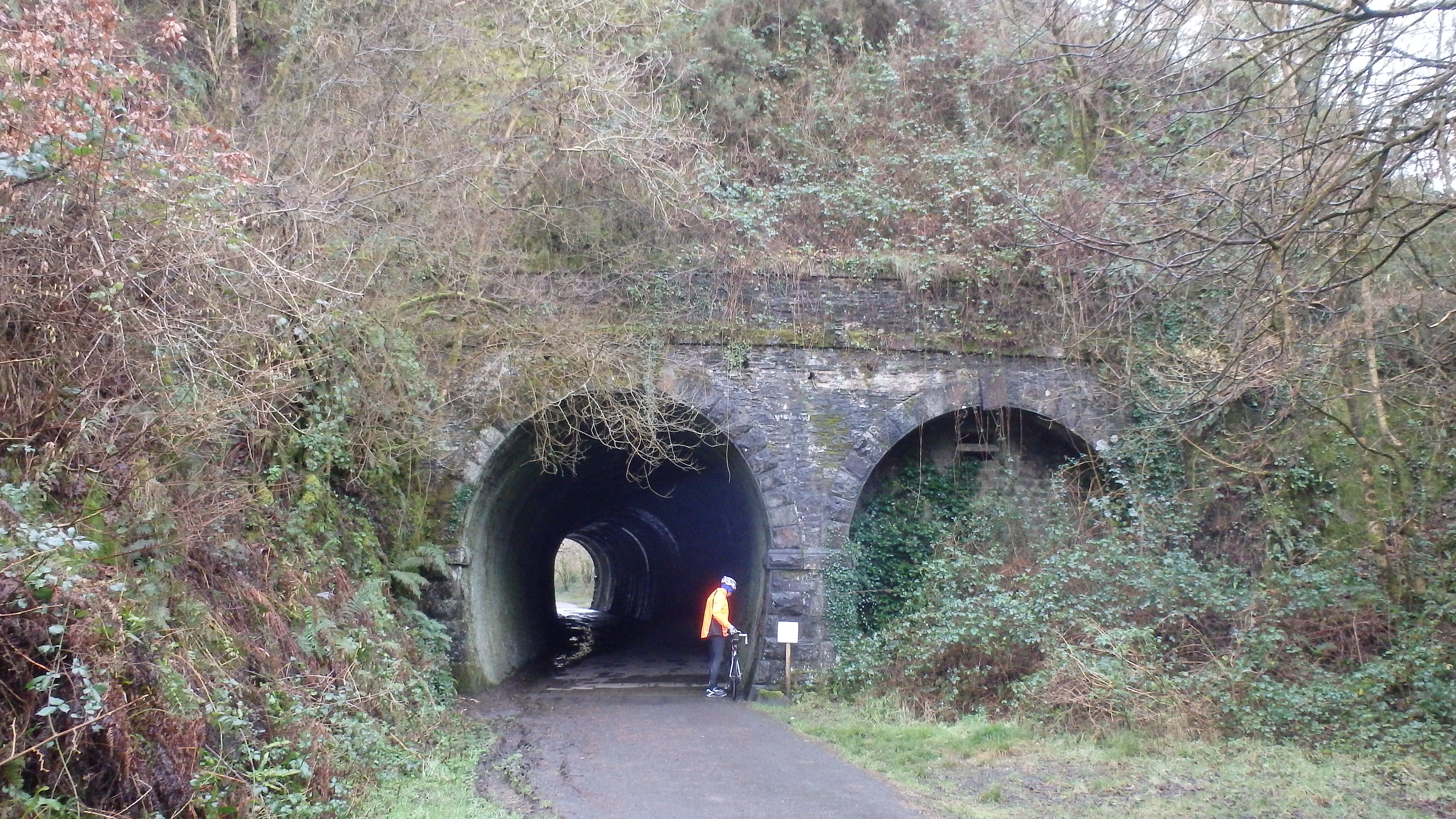 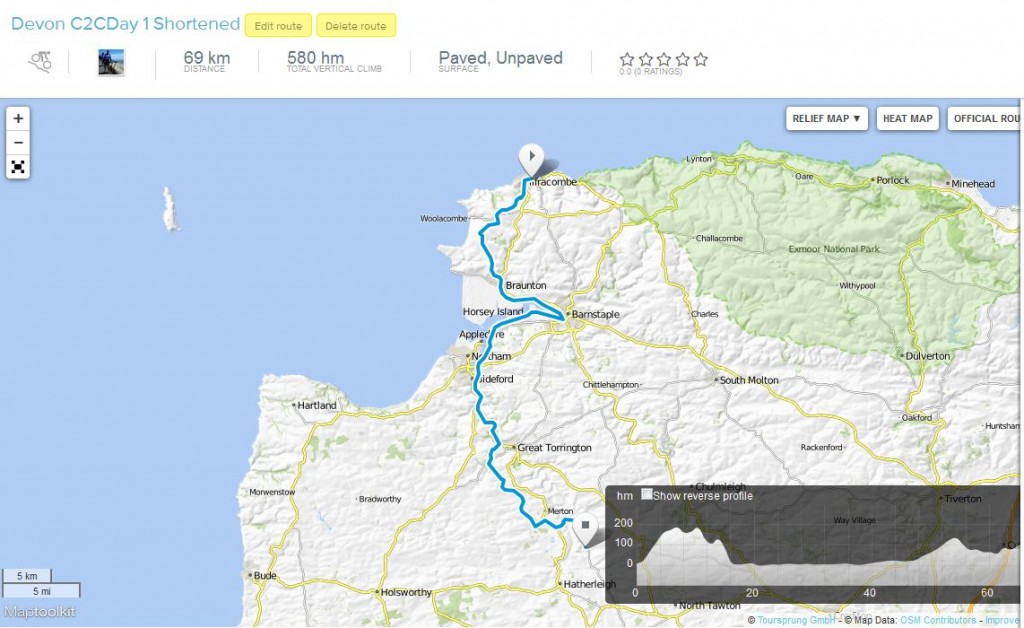 Well it is my birthday today and so that I don’t just sit around and drink beer it’s the start proper of our Devon Coast to Coast. It is 48 miles to the pub where we are staying tonight so we will have to get at least that far… if we really do get stuck Sandra is on hand in Susan’s car to rescue us.

As always before anything like this I did not sleep well. Despite looking at various maps and planning for weeks I am still not sure what we have let ourselves in for. The gradients on some hills are listed at 16% but using the electronic maps it varied a lot dependent on which map I used, Garmin TOPO GB, Google Maps or Openstreetmap… sometimes there is just too much information available. I am not even really sure of how to get to the start of the track or what the surface will be like. I was very nervous like I used to be before a race so had to use the loo a few times. The good news was that all that sitting down had made me a pound or so lighter!

Breakfast was excellent and all too soon we were unlocking the bikes and getting the car packed. It was a very dull grey morning and plenty of cold rain in the air being driven by a gusty SW wind.. the weather forecast was that we could expect gusts of up to 30 mph.. it was going to be a tough day.

We walked down the very steep drive onto the road before we mounted the tandem; no way was I riding it down that tarmac. Keith was soon out of sight heading down the road to find the start. We followed slowly and turned off left immediately onto a steep dirt track which I had decided was the quickest way to join the trail proper. After a bit of backwards and forwards tracking we freewheeled down to meet Keith. A sharp left uphill  turn and we were our way. The first 3 miles was a steady 1-2% climb along the disused railway line that was to form quite a bit of the first day’s route. The surface was good and the climb soon had me warmed up nicely.  The woolly hat that I had worn at the start was packed away.. I was far too hot to keep that on. 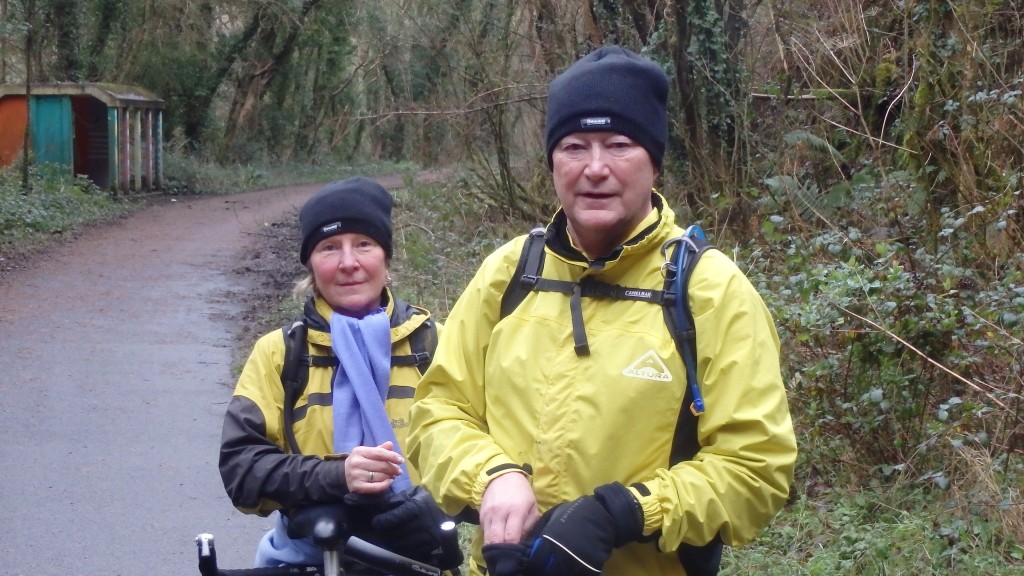 It was a little chilly but the hat was soon gone

When we reached the top the view was quite something, even though it was grey we could see right out to sea.

Now we were at the top as we all know the only way is down and so the next 8 miles or so was pretty up and down and we noticed the UP much more than the DOWN. The road was almost traffic free and we were soon on the “Tarka Trail” which was reasonably flat tarmac. It was time for a cuppa so we stopped just after Barnstable at the Fremington Quay Cafe By the time I got in Keith and Susan were already seated and sneakily eating the flapjack that Sandra had made to sustain us. The café owner was not too pleased and suggested we did not eat our food in his café, fair cop we still did though but not quite as obviously. 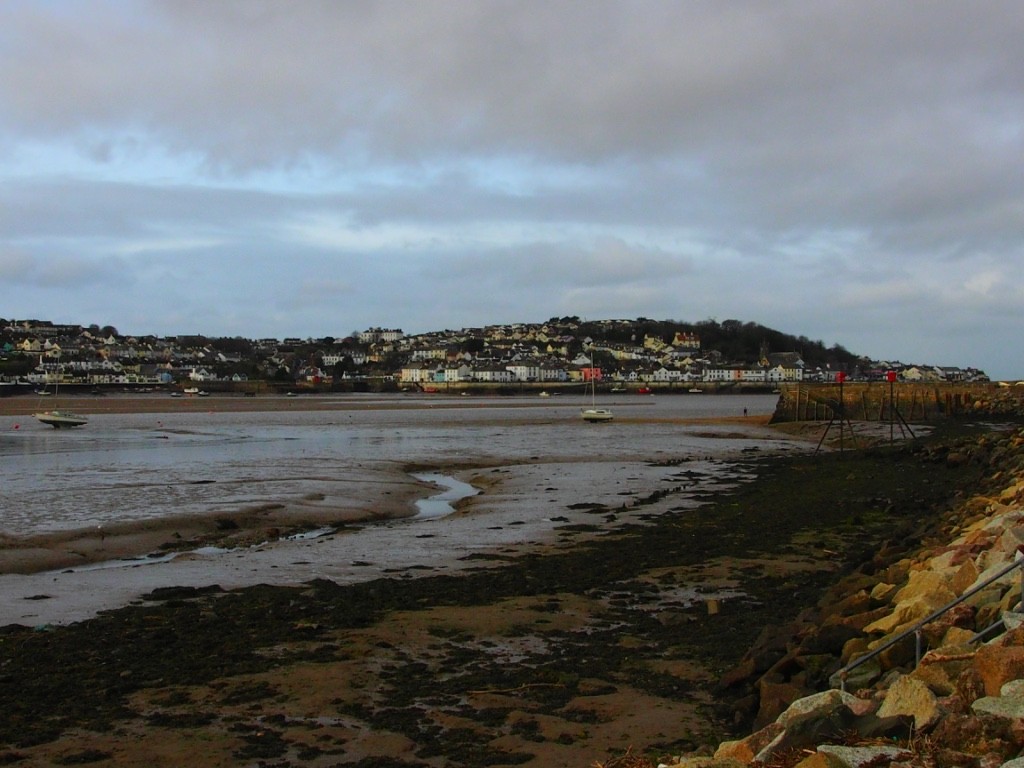 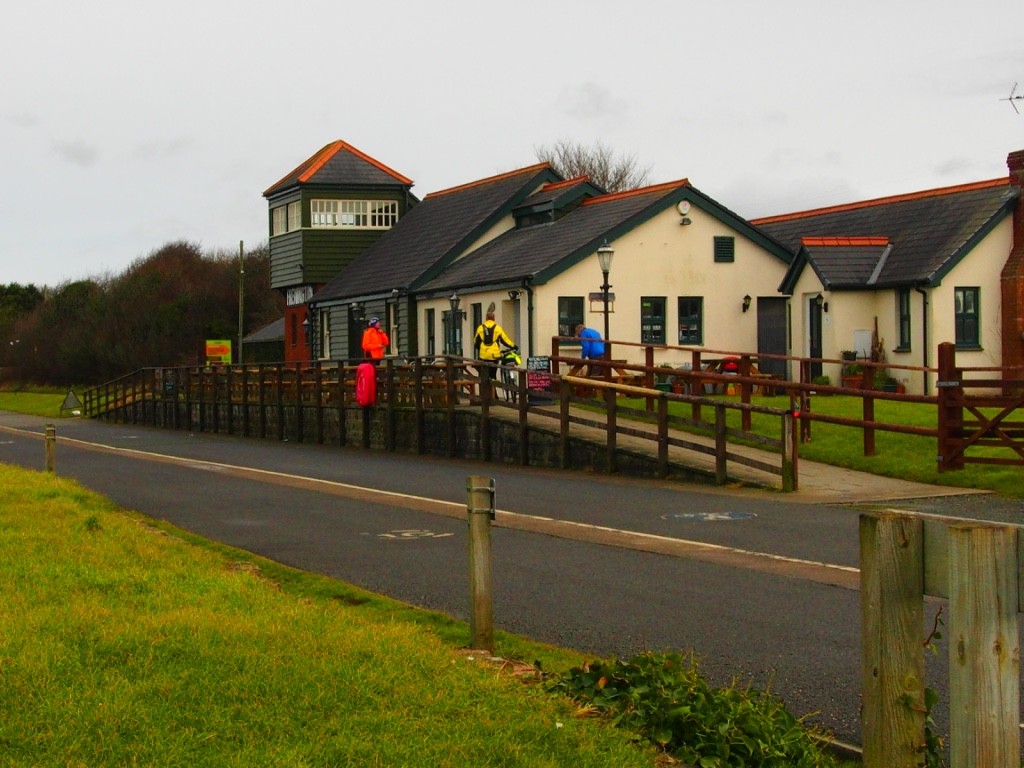 On leaving we had a stiff headwind but is was a nice ride with the sea to our right and open countryside to our left. The tarmac was smooth and it was flat.. if only that wind would have dropped off. 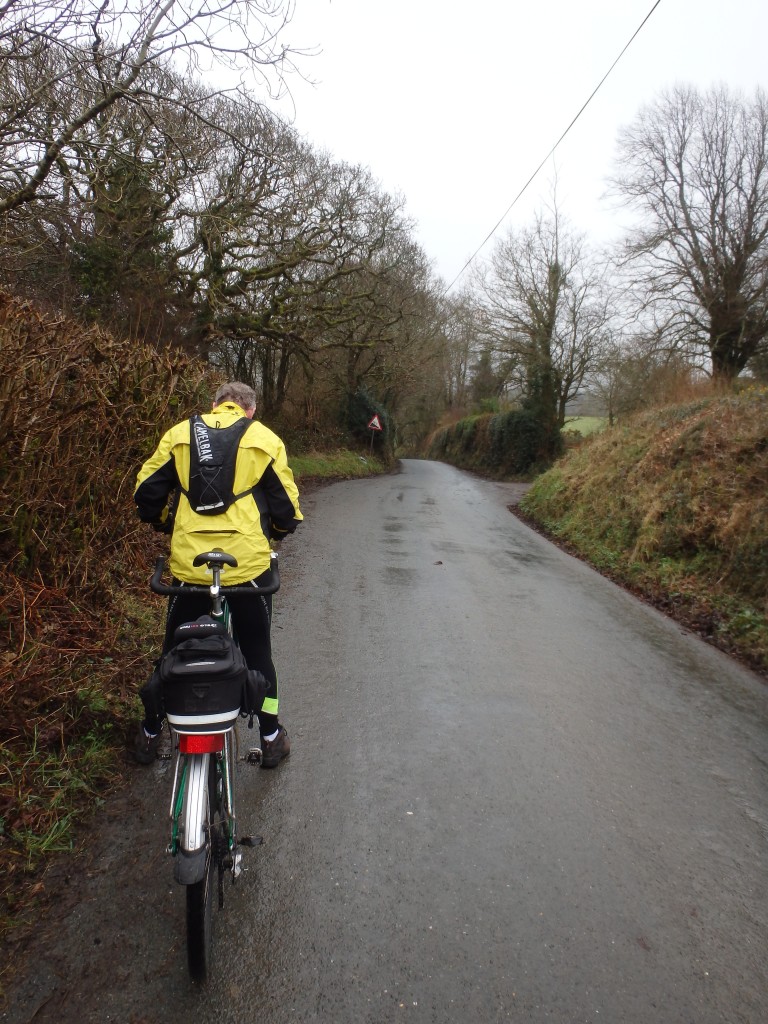 Off the coastal route it was quite hilly at times.. this photo does not really show the slope

The rest of the Tarka trail was good to cycle with the old railway stations that we passed all being converted into Cafes or tourist attractions. The surface did get steadily worse and eventually became a wet rutted gravel track that again was a few miles steady climbing, just about 1-2% but with the uneven gravel surface was quite hard cycling. 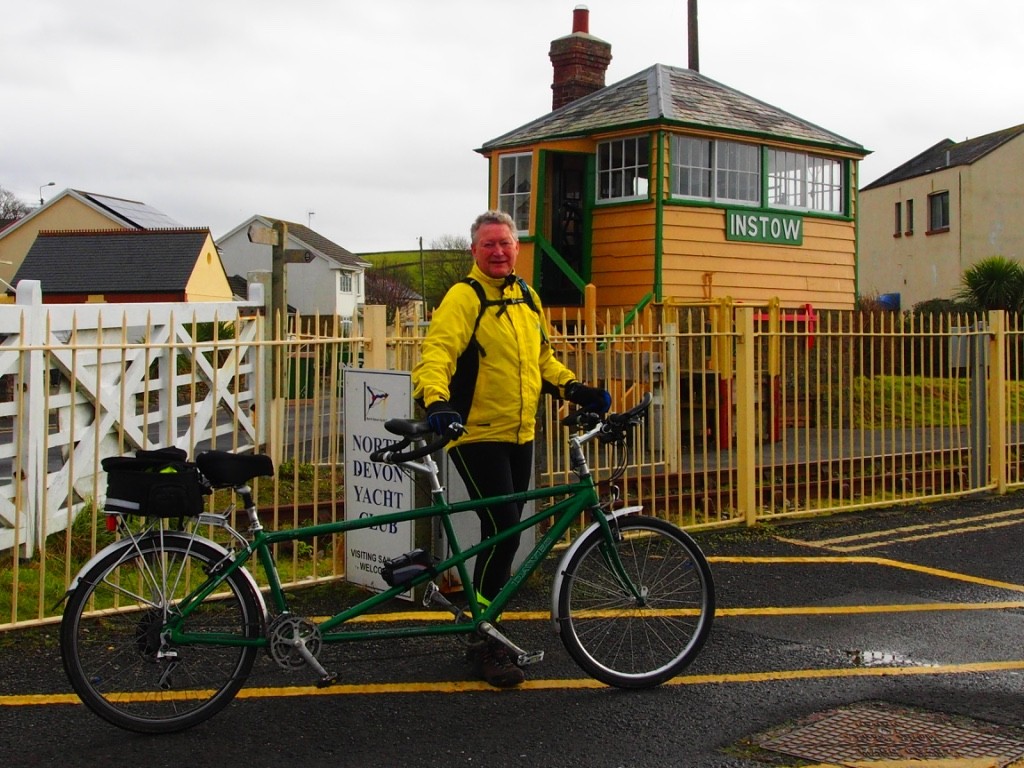 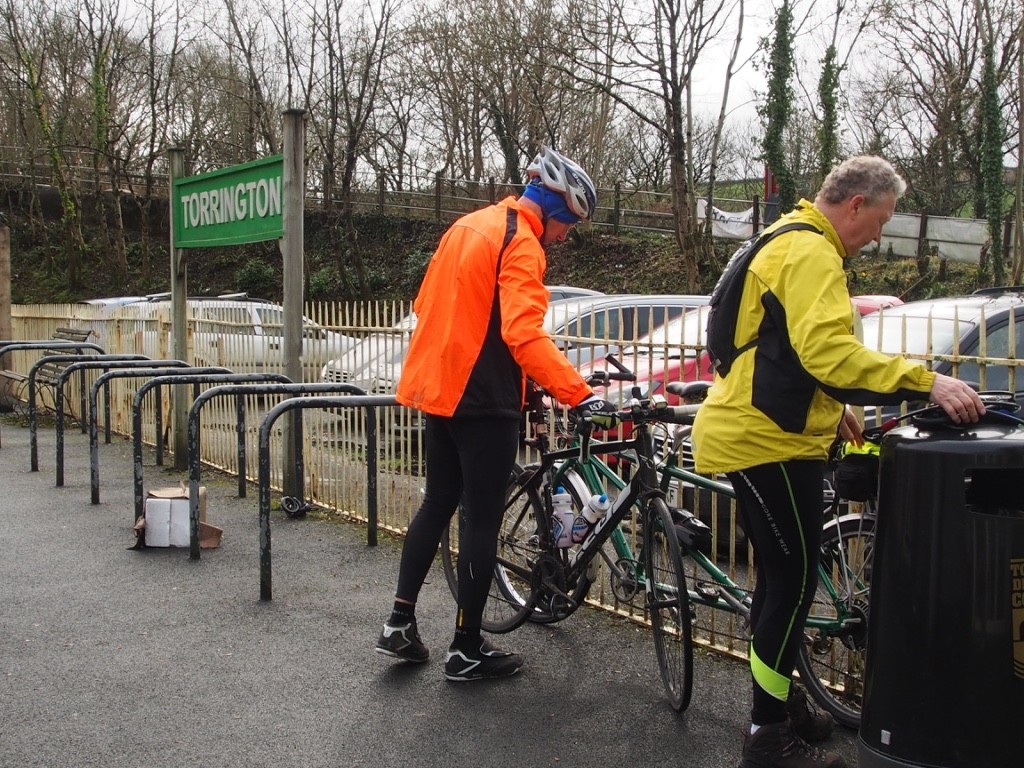 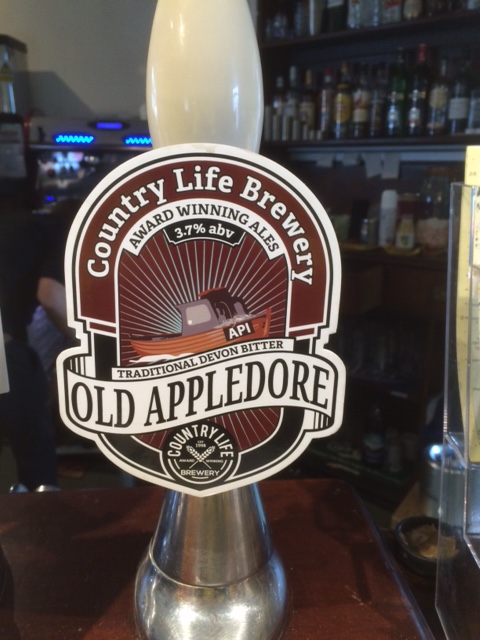 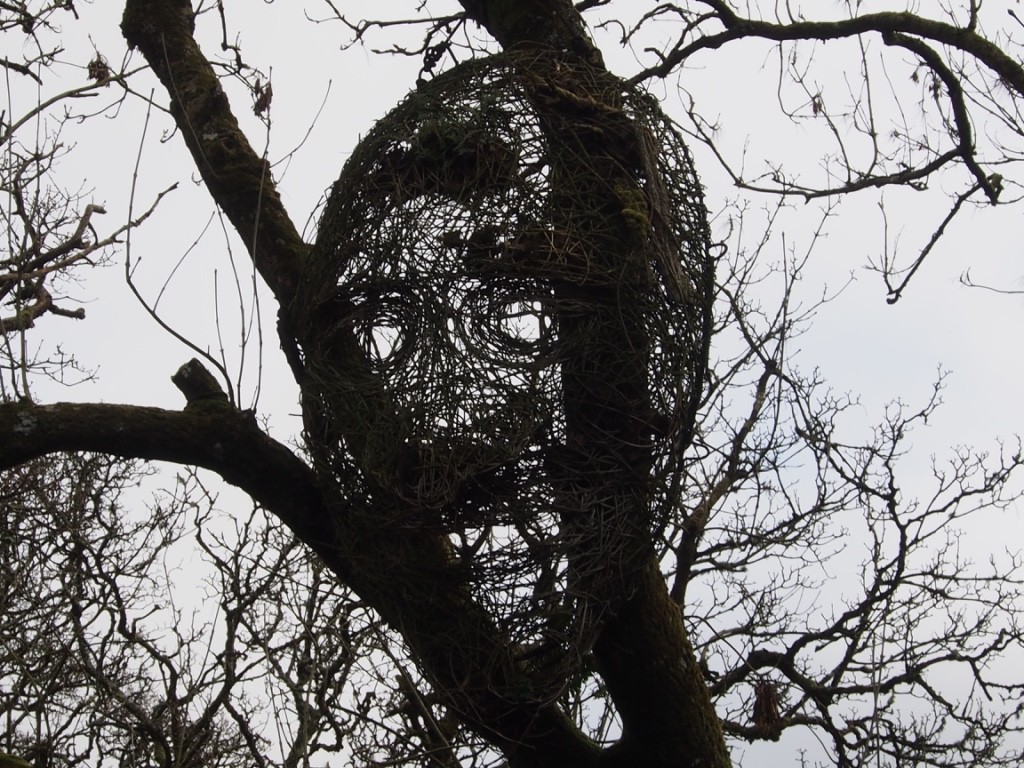 Giants of the forest

We left the route near Merton as we had to cross the river Torridge… to get to Iddesleigh and the Duke of York where we would be celebrating my birthday. It now got seriously hilly with some slopes at 16%.. this was what Susan described as a “dismount and Walk” type of hill, she was so right there was no way we could get up that sort of gradient on the Tandem.

We arrived at the pub at about 3 pm quite cold but happy that we had made it. The Tandem had behaved itself; We had done more than double our maximum previous distance on it. At times I even had to ask Susan to use the 3rd rear brake as the standard brakes really did struggle to slow us down enough on some of the wetter steep descents. The bikes were locked up in the beer garden… I don’t think anyone will be using it today! Time for a shower a couple of pints dinner then bed…

The first task was off, there was no shower in our room but we did have a tin mug in the bath to enable us to wash our hair.

No new beer for me to try and the 3 ales they had were not on my list of favorites so I switched to cider then had some wine with dinner.

My dinner was very disappointing (I had fisherman’s pie that was almost all mashed potato) but the others all seemed to enjoy their selection. After dinner we were surprised by the delivery of a birthday cake for Keith and I.. It was his birthday on Sunday 21 Feb.

Dinner over it was time for bed. Apart from the weather it had been an enjoyable day and I will remember my 61 birthday for some time to come