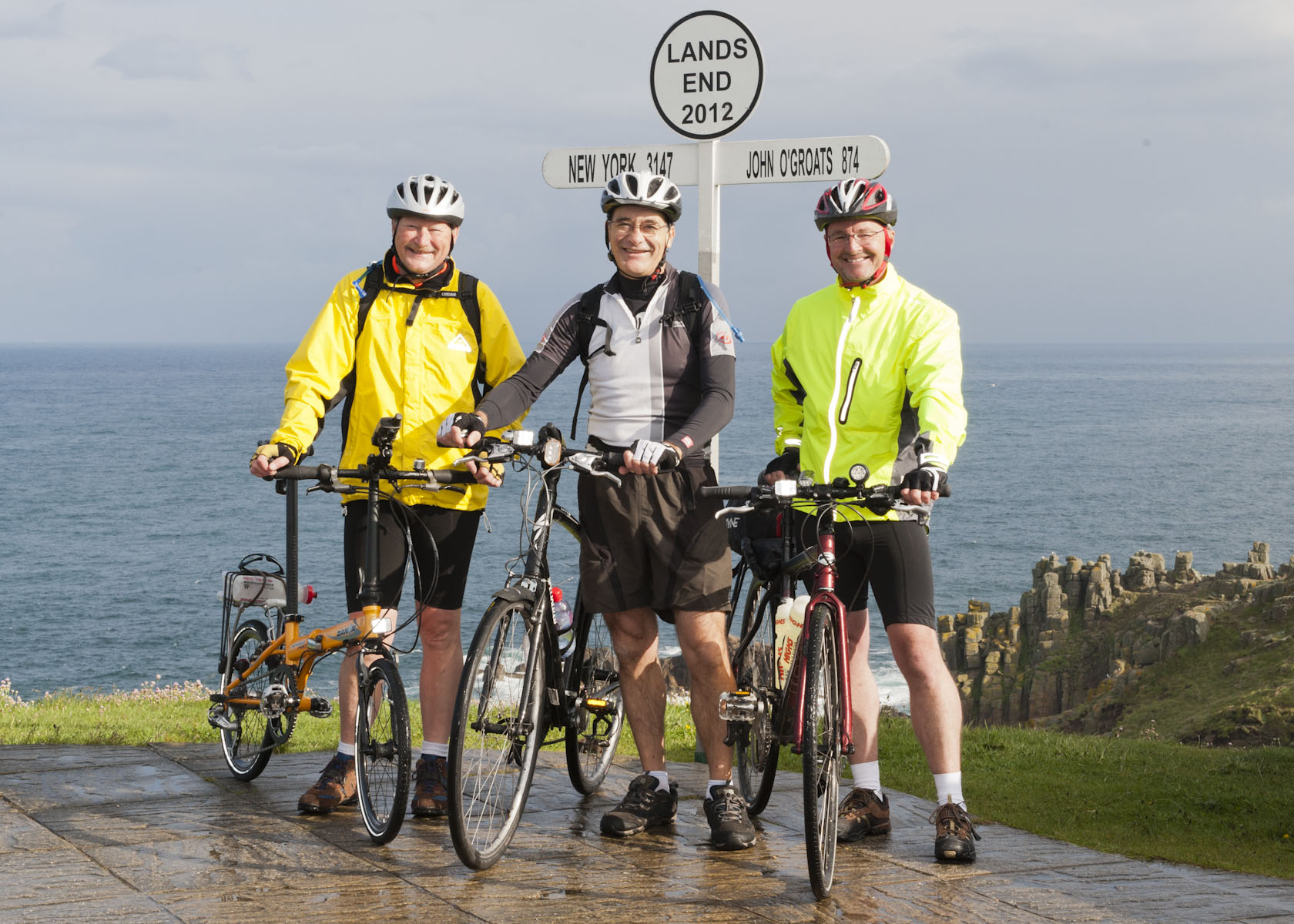 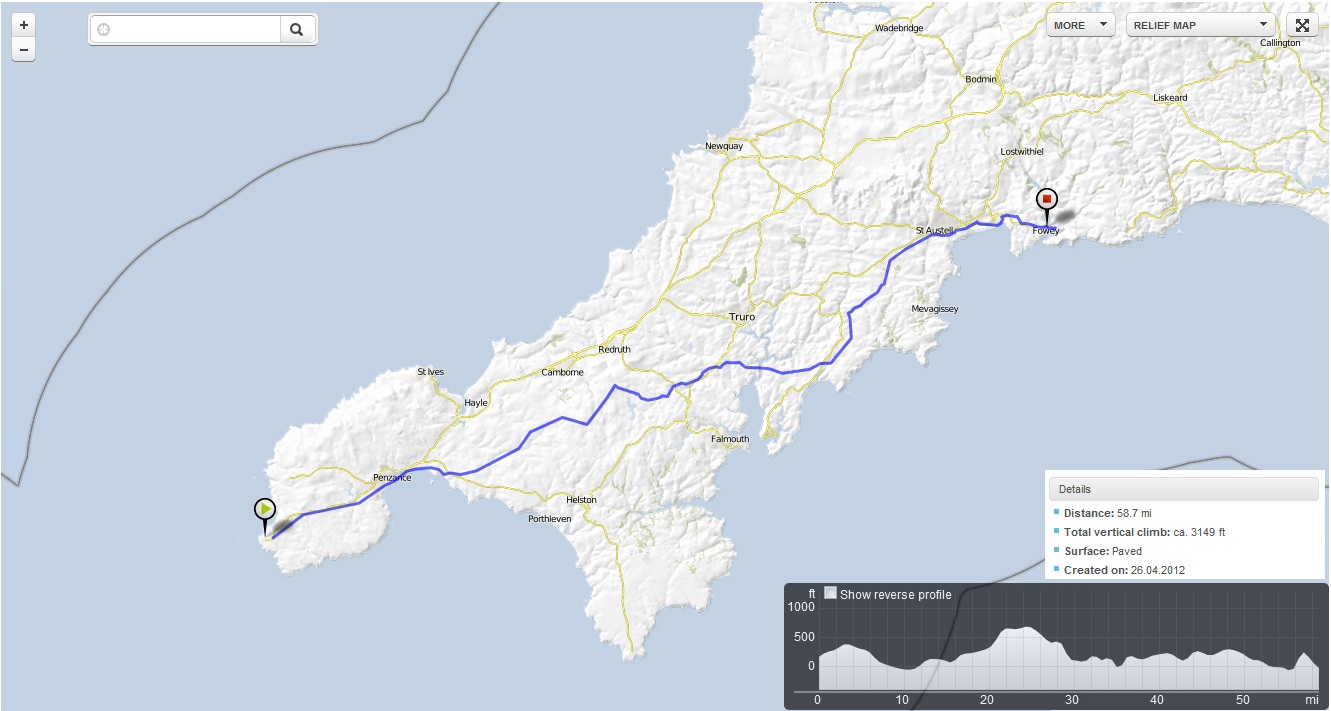 Day 1 will see us cycle from Lands End to Fowey / Bodinnick, covering a distance of 64 miles – a short first day to ease us into it! We will increase the distance to an average of approximately 80 miles per day after this though. We will be travelling along the A30 to Penzance, and then use B and minor roads wherever possible.

Following the coast road out of Penzance to Marzion, we will cross the A394 on to the B3280 as far as Four Lanes. We will then take a left on the minor road around the reservoir to Stithians. Following this we will be passing through Perranarworthal and Peranwell (keeping the A39 to the right) to Carnon Downs. Taking a left out of the downs, we will join the B3289 to King Harry ferry crossing (the first of 2 on this day). Due east after the ferry to the A3078 and following this and B3287 to pick up the A390 around St Austell, we will then take a right onto the A3082 to the B3269, then across on to Passage Lane (B3296), finally making it to Fowey and the ferry across to Bodinnick.

The 2 ferry crossings on route provide some respite from the cycling. The King Harry ferry is an iconic part of Cornwall’s history, being established in 1888, and connects Mawes and the Roseland Peninsula with Feock, Truro and Falmouth by avoiding the alternative 27 mile route though Truro and Tresillian. One of only 5 chain ferries in England, it departs every 20 minutes from each side, 7 days a week.

The Fowey to Bodinnick car ferry provides easy access between mid and east Cornwall. The car ferry operates all year and provides a continuous service leaving every 10 – 15 minutes during hours of operation. The ferry can accommodate foot passengers, cycles, motor homes, mini buses and small lorries to a maximum of 10 tonnes.

The terrain on the first day is best described as “rolling”, with a few steep hills and one bigger climb around the 25 mile mark! Once we have completed the days cycling, we will be camping at the Penmarlam Caravan and Camp site.


Met Paul and Rob at Waterloo and a very quick beer before the train left sadly Paul did not have time to have one! Arrived home just in time for the very large mobile motorhome delivered to my home and rest of the early part of Thursday evening spent being shown how to plug it in, empty toilets and other such joys…. Gave Barry a lift home then rushed home to get Rob and head off to sample the delights of Aldershot……. have to say the curry in the Nepalese restaurant was excellent!

Got home about 11 and decided I had better pack as we were leaving earlyish the next day.  Packing finished at about 2 am and actually only forgot a few important things, remembered the bike and padded shorts though so the essential were on board when we left.

Off as planned the next day but a slight delay as last minute omelette made with 10 eggs was cooked by Paul and devoured by the three of us.

Arrived at Junction 17 to collect David, his wife (Linda) suggested we must be mad as the weather was a little “inclement”, absolutely pouring down and the van almost being blown off the road at times.  Rob struggling to keep in a straight line as we were buffeted for side to side.  It took about 6 hours of hard driving to get us to the campsite.

We were assured that a short walk along the coastal track would take us to the Pub.  It was a “little” more than a short walk but we forced ourselves to do it so we could have dinner and another beer.  It had stopped raining by now but the wind was crashing the breakers into the beach, it was quite spectacular.  After the walk back which seemed much longer with beer and food inside us we arrived back to “our new home” and settled down for the night in preparation for a reasonably civilised start at 8 am.  Rob was awake at 5 am so we all were!

Drove down to LE from the campsite and arrived in torrential downpour which thoroughly soaked me while getting the bikes of the back of the van, it was so cold my hands were so wet and freezing I could not get my gloves on.  Rob took a couple of picture and we hung around waiting for our team of wellwishers to arrive but eventually decided as it had stopped raining and the wind had stopped we would get off.!

Full of “enthusiasm” we set off on the flat section from the Lands End hotel and within a mile or two it started to get a little hilly but it didn’t matter as we were on our way. The ride into Penzance the St Michaels mount was very pleasant and the weather was holding!

So far I have found this very difficult, much harder than I expected but Paul assures me it will get easier (he is a very creditable liar) .  Lessons learned , I need more to eat than 1 Banana for a day’s cycling in this terrain, folding bike very scary in the wet, Paul is MUCH fitter than me (to be honest I knew that already)