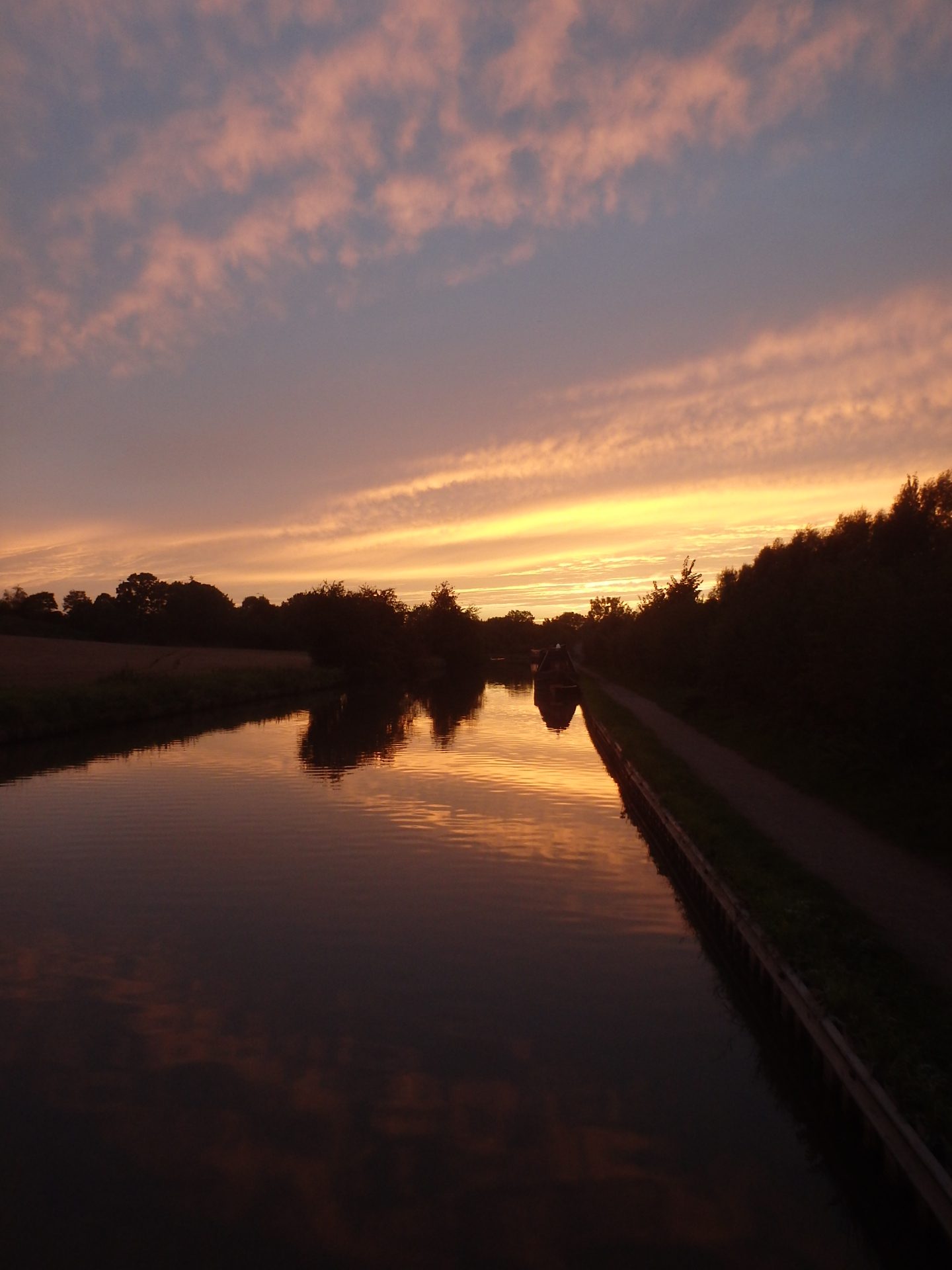 Despite being in an idyllic location with a relaxing sunset I slept really badly.  Was awake at about midnight again with the moon shining in, how can it target a 1 foot round hole and hit my face like a searchlight.  Maybe its not the moon maybe a peeping tom following me?  Could not get back to sleep properly as the Hatton rise was weighing on my mind?

I got up properly at 5:45 and just pottered about had tea and a bowl of Singapore spicey noodles hoping that would liven me up a little.  Was messing about so much I almost missed a boat about half a mile away leaving its mooring.  I untied FAST and followed my logic being catch them up and we could go through the flight together, quite a good idea or so I thought until they turned off into Kates boat yard to drop off their hire boat… DAM

Oh well on I trudged dejectedly until the police stopped me, NO CHANCE I was speeding.  They said there could be a one-hour delay as a lady with Alzheimer’s was missing and she maybe along the canal.  They asked me to keep am eye out for her but honestly it would be very difficult to spot her amongst all the other “unusual people” who inhabit the canal system!

I had two lock to go through before I got to the Hatton flight and I messed them both up.

I could not get near the ladder I was back and forward, boat across the lock you name it the boat did it not good for my confidence.

When I got to the first of the Hatton flight, I gave myself a good talking to and sorted myself out after all the locks the previous day had gone really quite well.  Lock one PERFECT, it’s in my favour so although I have to get off I don’t have to empty it.

Take windlass and leave it by the ladder, open the gate, just one side, back to boat, steer my way in rear of boat to ladder, climb up with centre rope, tie off, shut gate, open paddle, fill lock, shut paddle, open other gate, drive out… not bad at all.  Second lock not quite as smooth did not leave windlass at ladder so had to climb out with it but not bad.

By the by the third lock a lady walking asked if I would mind waiting for a boat coming up, being a gentleman I said I would be delighted to wait and we could go up together.  What a great decision that was as “Snark 7” piloted by an ex-Army nurse Suzy pulled into the lock beside me.  The really good news was that she had 4 friends who had just turned up to help her through the flight!

So, ALL 20 LOCKS were in our favour and as we exited the lock ahead was almost ready sometimes they were so slick we just motored out of one into the other, BLISS!

By 2 pm we were at the top we tied up, had a picture taken and we parted ways as they were to branch off to the Stratford canal and I was going to Birmingham.

I handed Suzy a bottle of Susan’s wine for them to share at lunch to say thank you.

As a footnote I have been struggling with my top rope being too short making it difficult to get to the back of the boat and climb the ladder with it in hand.. Suzy noticed this and gave me a brand new shiny Red White and Blue one.

Just at the end of a good day it all went a bit wrong, a boat came round the bend and to avoid her I was in the weeds. I had managed to ground the boat she did say sorry as she went on her way. I was stuck in the mud, took a little forward and reverse to get it moving again.

Motored on for another couple of hours as there were no locks and the sun was shining, now moored up, fed and having a beer.

As Scarlett is enjoying my blog I have added a picture of my dinner guest, as soon as I sat down on the bow to eat it started to demand it was given a share.