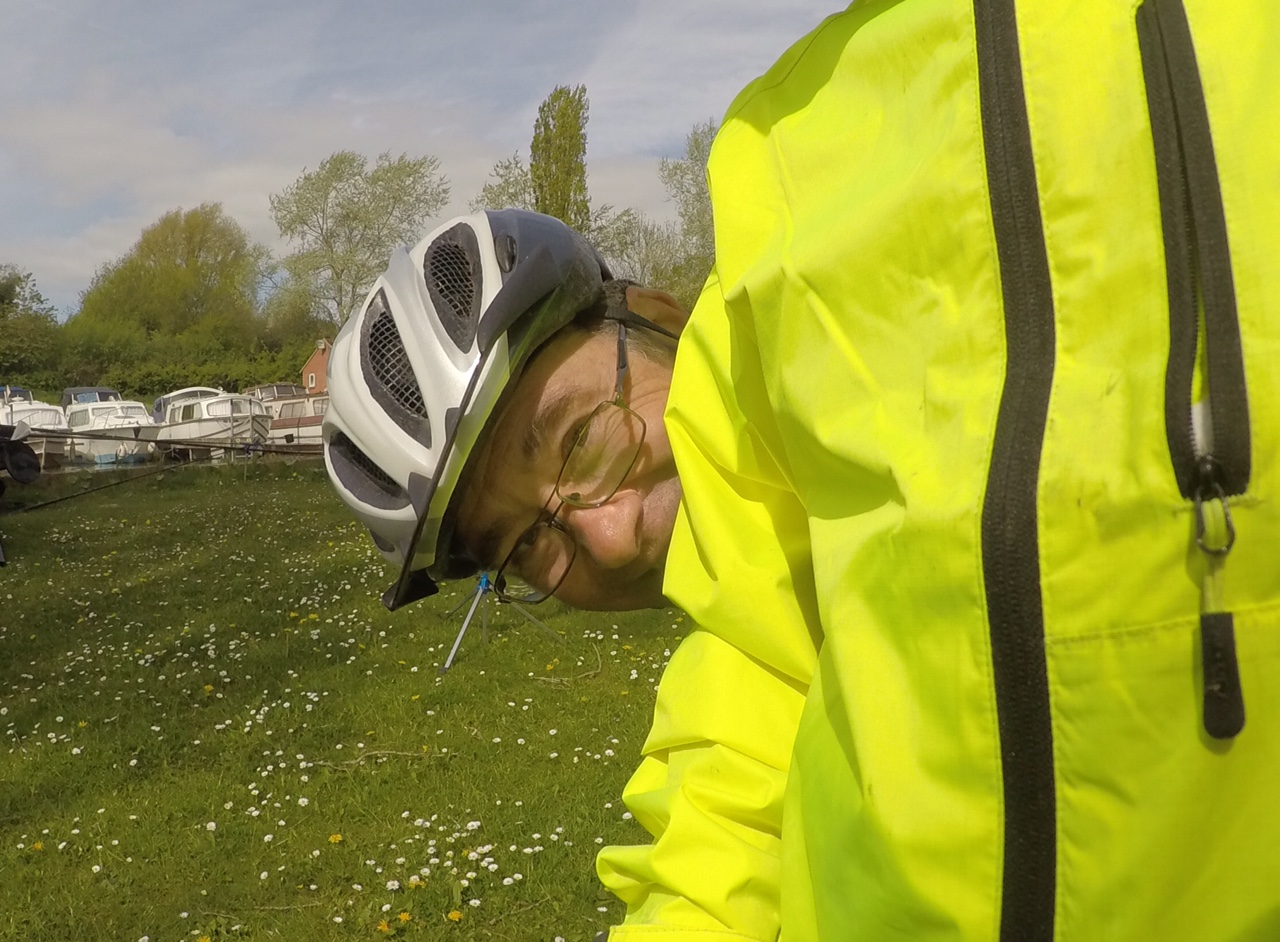 As usual Susan was awake at “sparrows” and I knew that I had a puncture to fix so we got up early so we could be all sorted for departure after breakfast which was booked for 8 am.

The front tyre had the usual thorn in it and at this point Ted informed us that the hawthorn hedges had just been cut so that was where all of our issues were coming from. We had the luxury of clean water here so fixed the puncture then I checked a couple of our other tubes as we had already repaired them both… who knew how many we would need that day. At this rate we would be out of puncture repair “scabs“long before the day was out!

We loaded all the panniers and Susan’s rucksack and went into breakfast. We sat down to drink a cuppa and wait for Paul and Jayne to join us. Breakfast was excellent; just about anything anyone could want including a choice of Duck or Chicken eggs and home made sausages. With that inside us we were ready to go.

Jayne retrieved her bike from the “polytunnel” and found that she also had a rear wheel puncture. This was getting very tedious but after the repair we were ready to go. Susan sensibly suggested we did not ride down the hawthorn strewn path so we pushed our bikes to the main road then started cycling.

We cycled down a short stretch of road to find the path to the canal,  we got lost!  We had missed a turn resulting in us doing a small loop back on ourselves.  Finally we arrived at a locked gate that we had to lift our bikes over. We were almost back to where the towpath started but getting our bikes down to the canal side was not easy as they had to be carried again over a barbed wire fence round a very steep corner and into the mud, we had only done about a mile and we had got thoroughly soaked and had to carry the fully laden bikes over two obstacle… breakfast seemed a long way away already. 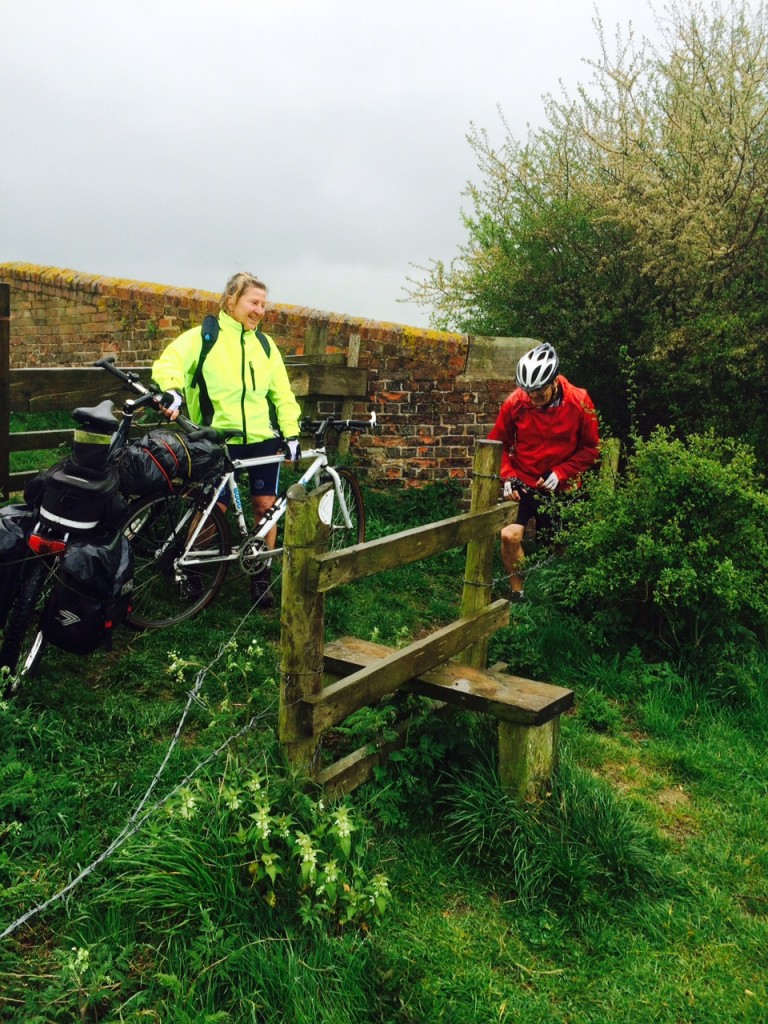 Susan looks happy.. she does not have to carry the bikes down to the canal side LOL

Cycling was almost impossible the path was very deep in mud and very narrow with what looked like an inevitable soaking with the slightest slip. We plodded on in misery the rear wheel of my bike was sliding all over the place and I’m sure the others were all having the same experience. When we got to Rugby there was some respite with a decent path but that relief was short lived and we were soon back on the grass in the mud. We made very slow progress with as much time pushing as there was riding our average speed had dropped to 5.5 mph; it was going to be a very long day. 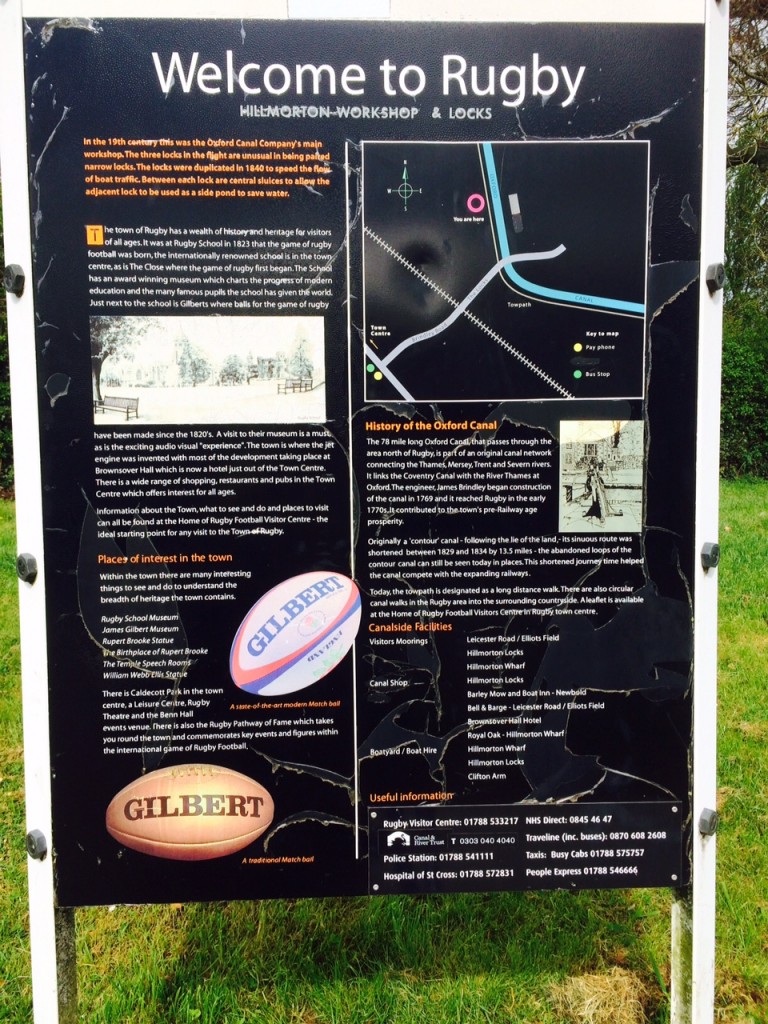 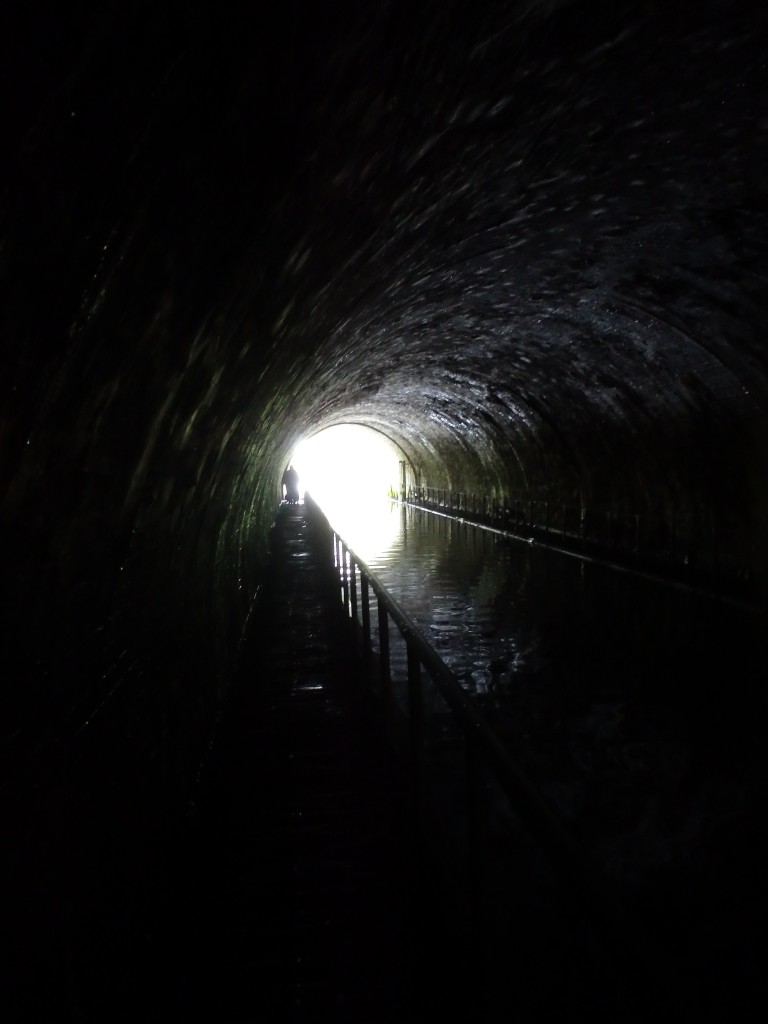 There is light at the end of the tunnel… at least it was not raining in here! 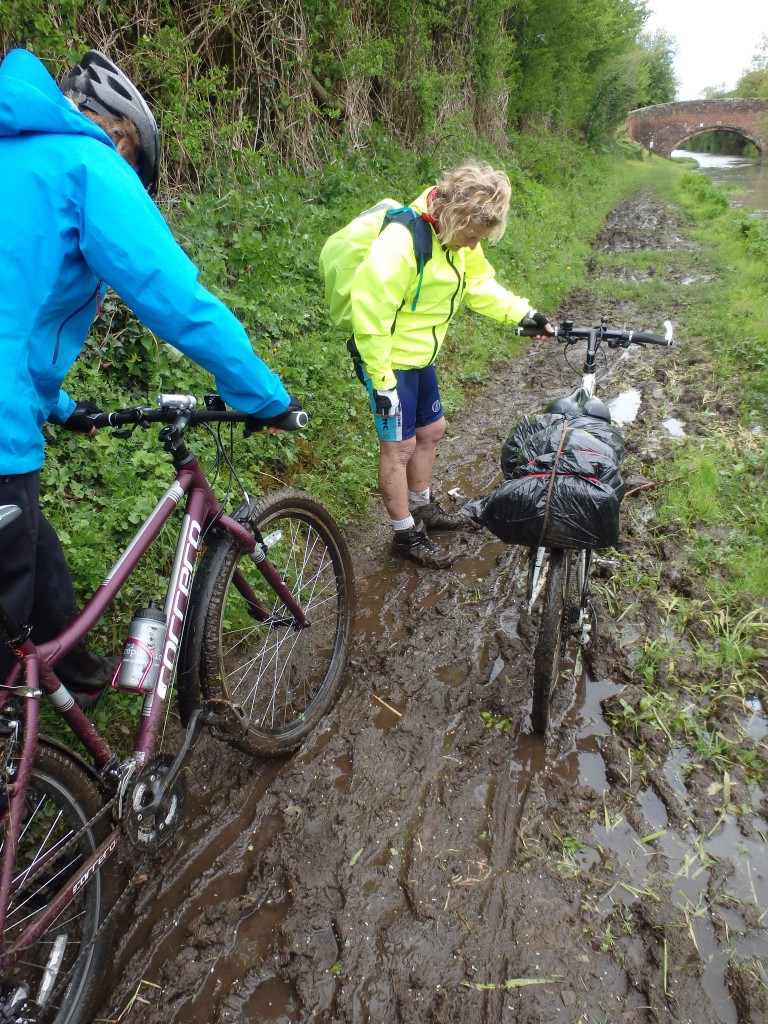 The path was “not good” for long stretches.. MILES!!

By lunchtime we were desperate for a break so we started to search for anything that would give us some respite and eventually left that canal at Ansty where my map indicated there was a pub. As we rode up to the Ansty Social club it looked closed so rather dejectedly we turned to continue our torture. At this point the door opened and Steve shouted to us that they were open and we were welcome to use the facilities. Link to the site  http://www.anstyclub.co.uk/ 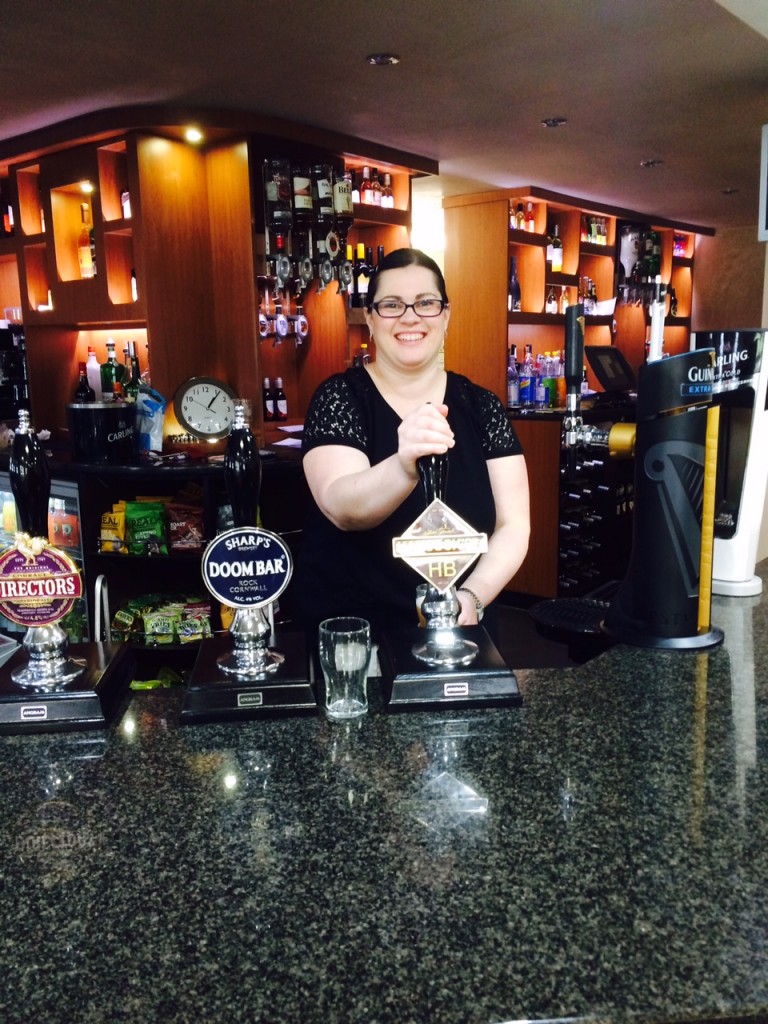 We took off our muddy boots and sat down in the dry and warmth recovering slowly. I popped to the bar and noticed a beer I had never had before so could not resist having a half. Thanks to Natalie for being so obliging. People who know me will be aware that I don’t normally drink half’s but I was going to need all my whit’s about me if I was to avoid falling in the canal later.. Paul took the wise decision of just having a half as well. The ladies sensibly avoided the beer and had a bowl of soup which we shared.

Sitting in the warmth some discussion began about the feasibility of continuing under these conditions and although Paul said that he and I could probably manage it the ladies would certainly be struggling if the next 30 or so miles were like what we had already been through. A new plan was discussed and the 4 of us agreed that a detour along the roads to our destination was the only sensible option, what we had endured that morning was no fun. The decision made I plotted a new route on my laptop and downloaded it to our SatNavs.

Ready to go we left the bar to find that I had yet another puncture as had Jayne. Why is it always the back wheel? Panniers off AGAIN 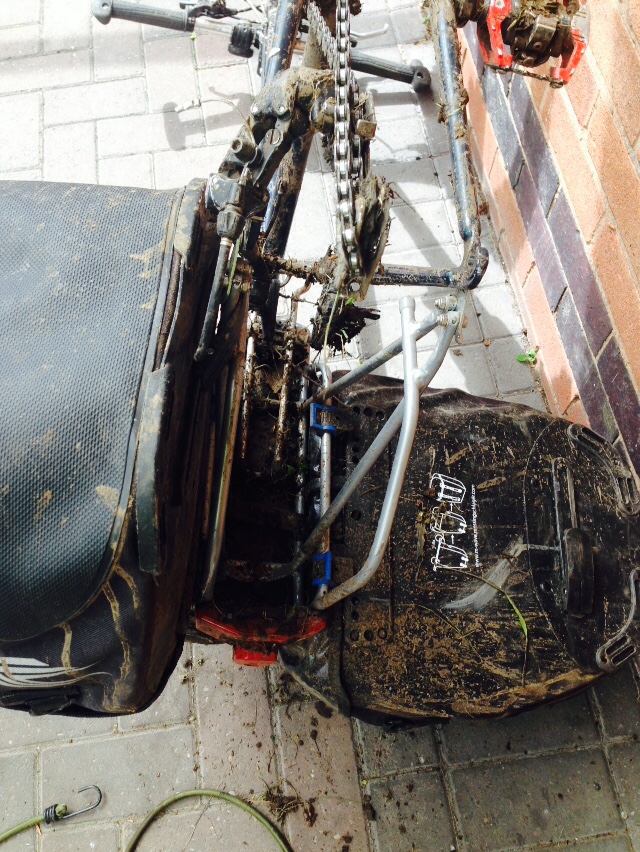 The rear of my bike was quite a mess….

On the road we noticed how hilly it was there, one thing about the canal is that it is at least flat. We made our way to Nuneaton where Jayne decided that she had cycled enough for the day so another quick chat and she was going to get on the train to Litchfield. Paul escorted her to the station while Susan and I carried on, Paul could easily catch us up and he did.

Susan and I were stopped at the top of the hill on the A5 near bonehill bridge where it crosses the canal. Paul joined us and we looked down at the canal towpath. I pointed out to Paul that it looked perfect, he looked at the other side and said it is all back to mud over there, he was right it still looked unpleasant cycling.

He then said he would get on if we didn’t mind as he wanted to meet Jayne when she arrived at the station. He cycled off and 30 minutes later he was dead knocked off his bike by a van.

Tuesday 5 May 2015 was one of the saddest days of my life, I had known Paul for almost 40 years, he was my son David’s godfather and he was one of those people who I was always happy to see and enjoyed every moment we had together. We were “children” together riding our motor bikes, cycled LEJoG, drank gallons (100s of gallons) of beer, quite a few bottles of Whiskey, fished and generally had a good time. I will miss him, RIP Paul my friend. 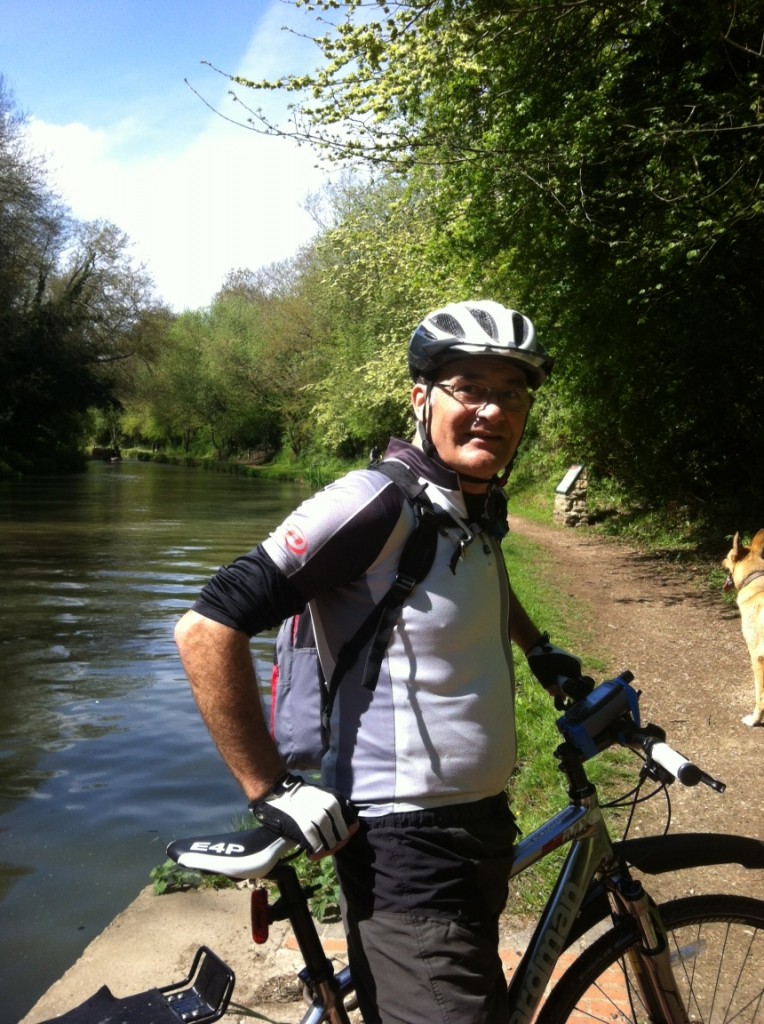