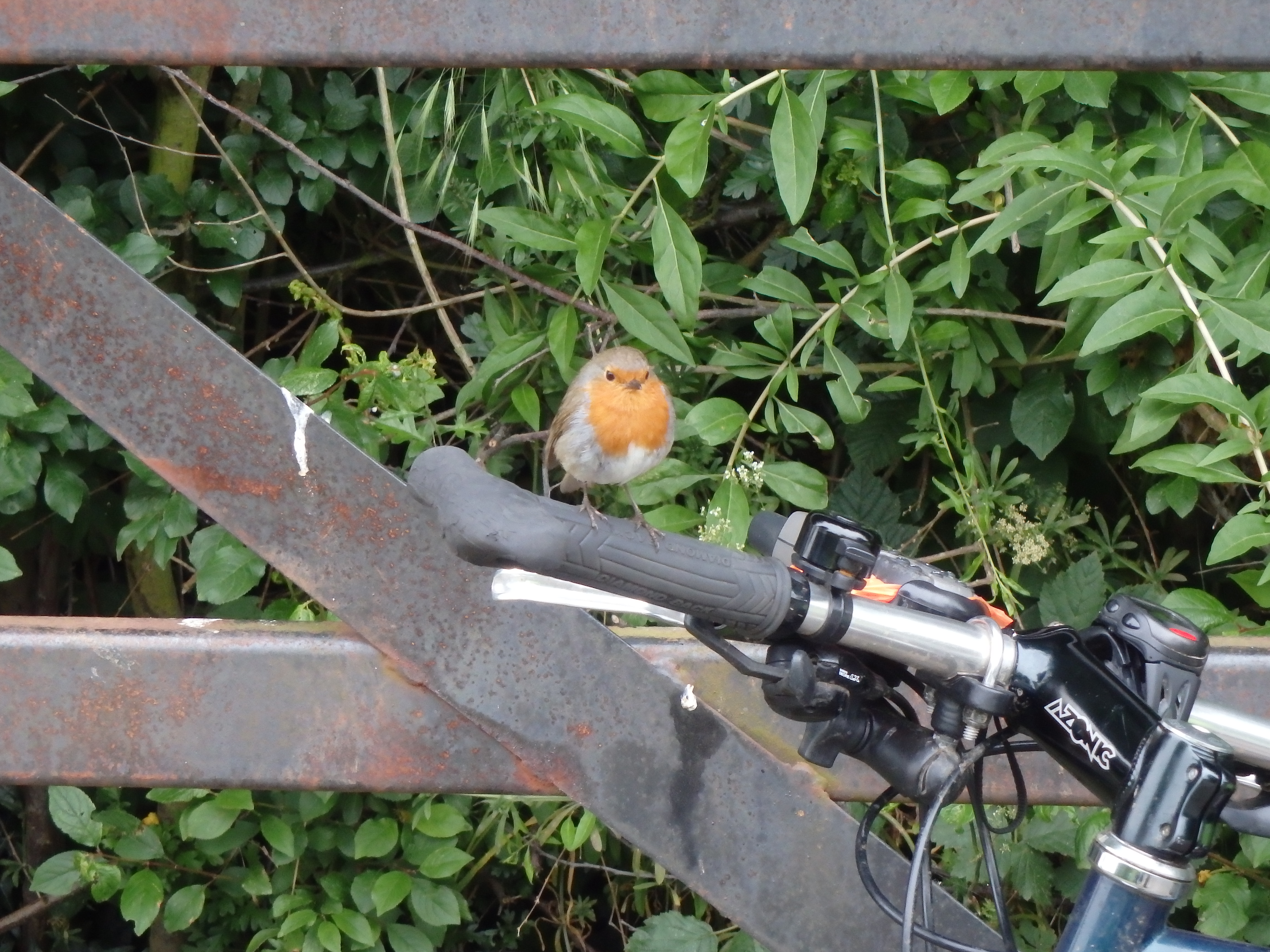 Today’s Route is about 54 miles Starting at the Ansty working man’s club finishing at The Dog and Doublet Sandon Lock.  Starting on the Oxford canal crossing to the Coventry canal at Hawkesbury Junction then onto the Trent and Mersey Canal at Fradley Junction. 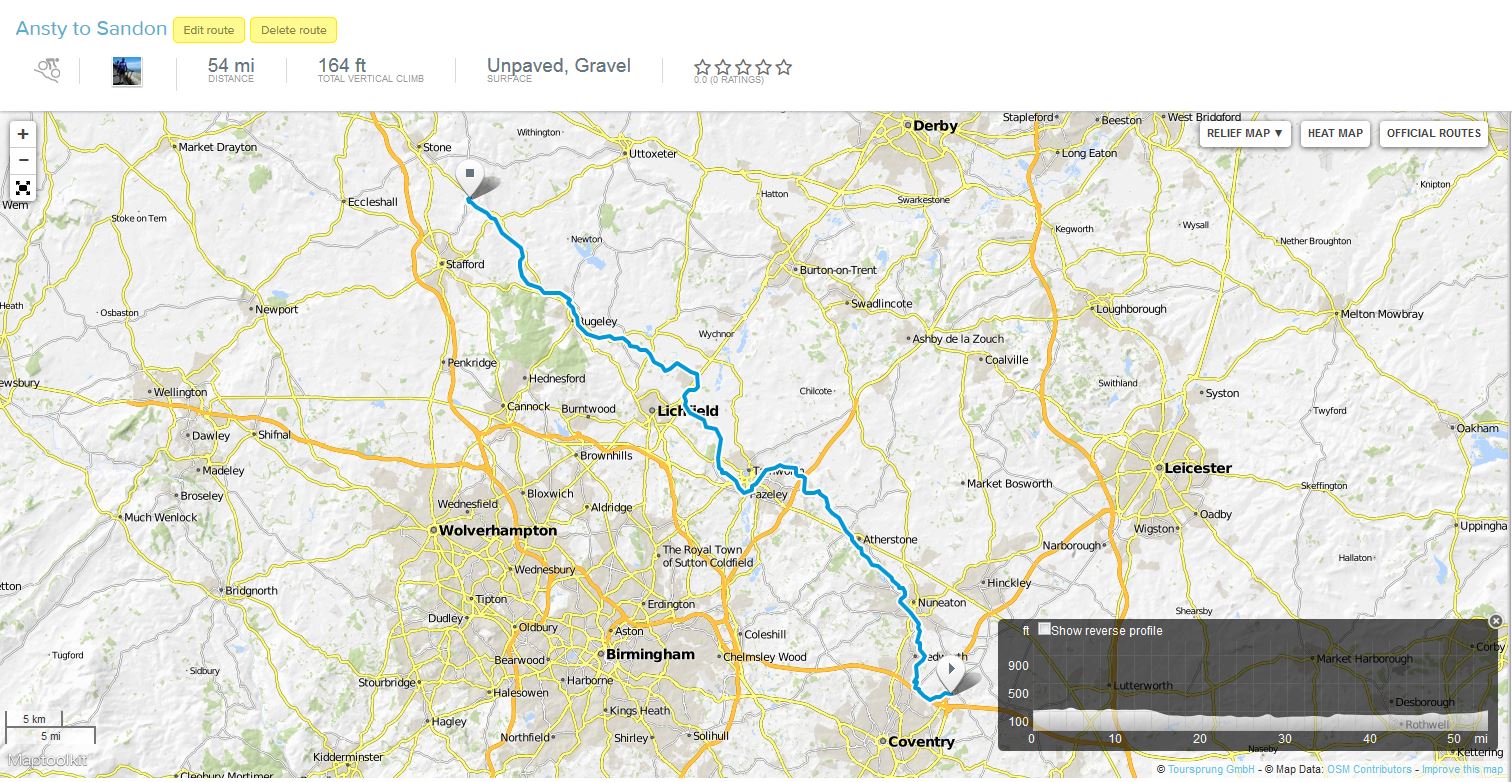 Keith was up at 5 am (he tells me he always is) so by the time Susan and I had got up at 5:15 and downstairs there was tea made plus sandwiches and flapjacks to take on our trip to see us through the day. We now had enough food, energy bars and drinks to power us to the moon. That is probably a bit of an exaggeration but we certainly had enough for the day. Keith had even got me a cuppa “to go” so panniers repacked car loaded we were on our way to Ansty by about 5:30am.

A short 30 min drive and we were at the working men’s club car park where due to very bad conditions we had made the fatal decision to leave the canal on the 5 May.

Unloading the bikes we put in the wheels, connected the brakes and pumped up tyres. I then cycled round the car park a few times trying to get my saddle adjusted to a comfortable height as we had lowered it to get it in the car. At this point we were almost set to go so after a handshake from Keith wishing us good luck and us thanking him for getting us to the start he left us to get the panniers on rucksacks loaded and all the other minor things you need to do before setting off… I find a “visit to the bushes” is essential. 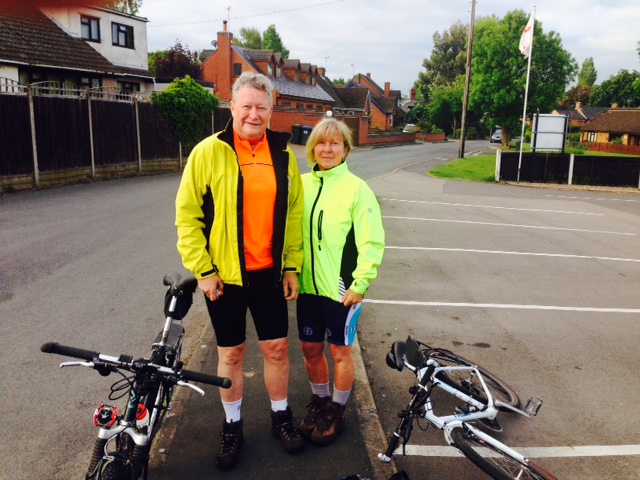 At the start not a drop of sweat in sight…..

That was it about 6:30 am Wed 10 June we were pushing our bikes with some trepidation onto the tow path after all we had no idea what to expect as when we were last here it had been practically un-cycleable.  With some relief we saw that it actually looked OK, I’m not saying it looked good it was very narrow and there was plenty of lumpy grass but the deep mud had dried up. 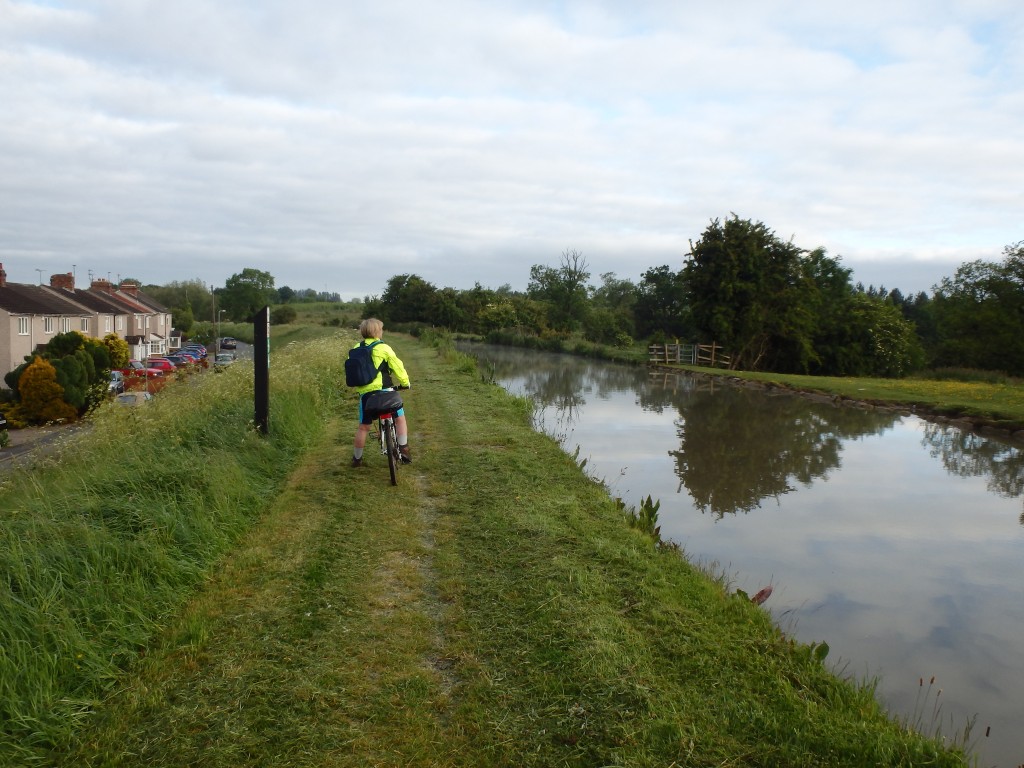 The Start at Ansty 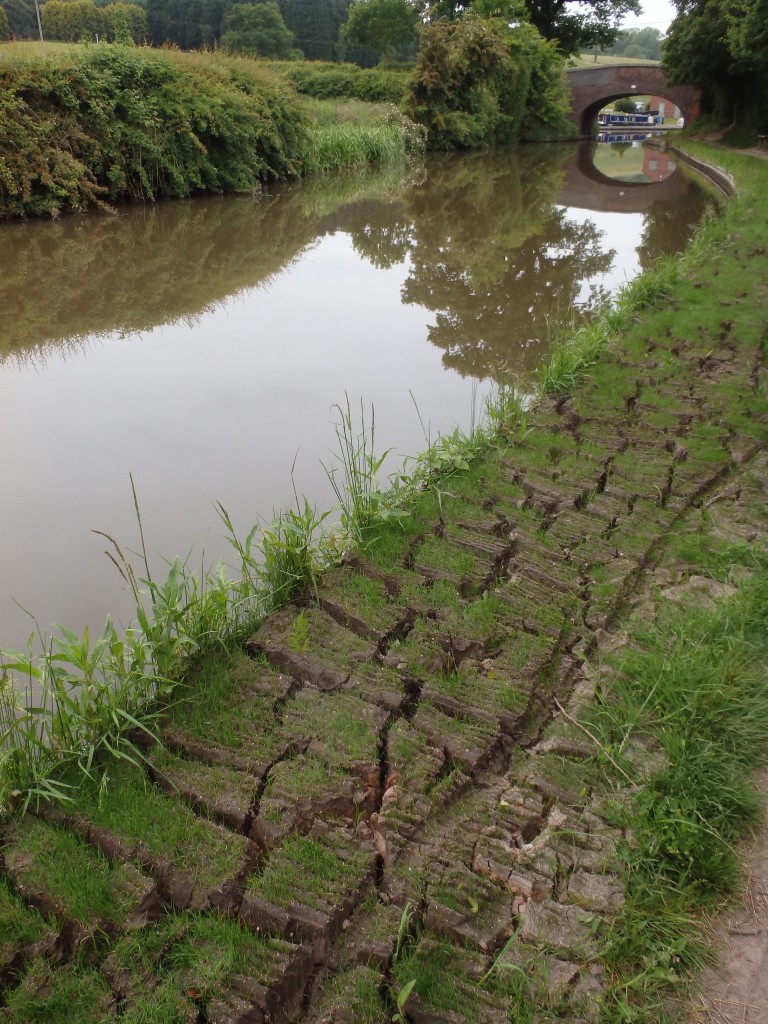 What a difference a month makes the mud has dried 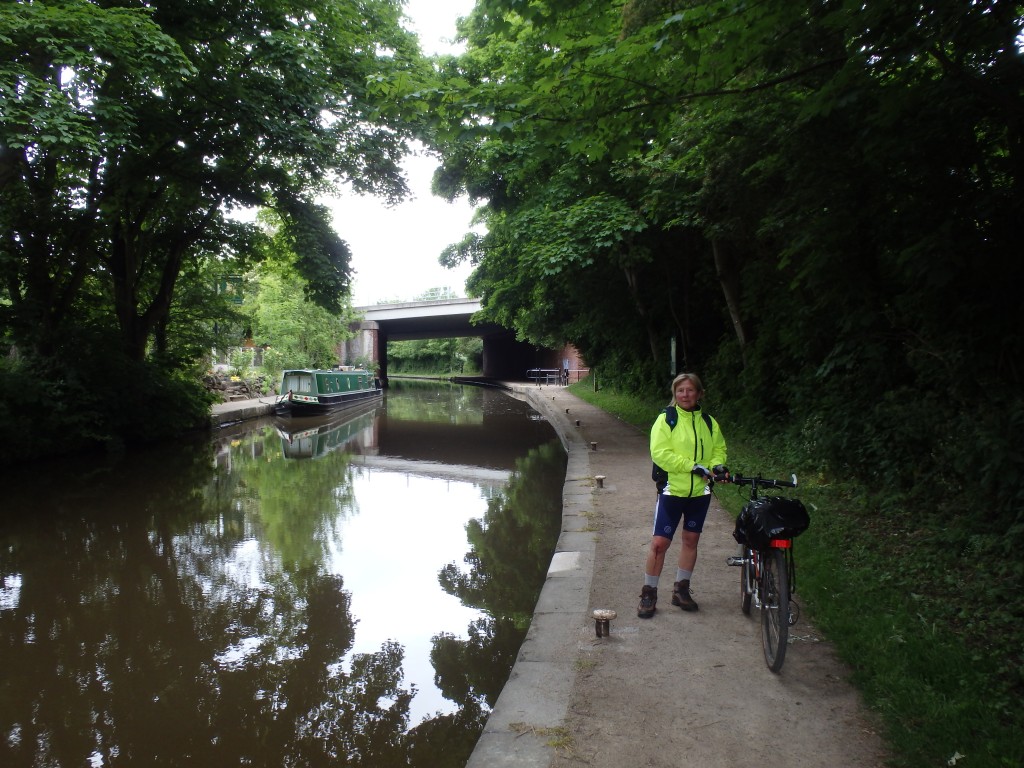 Under the bridge where I had last spoken to Paul

We pushed on and the path varied between not too bad and not too good there were very few  fast sections it was mostly narrow gravel or grass. We were lucky in that some of the grassier parts had just been cut probably only the day before as there was the smell of cut grass and the clippings were still green. The cutting of the grass certainly made the path smoother but my tyres felt VERY heavy as they collected great chunks of it. 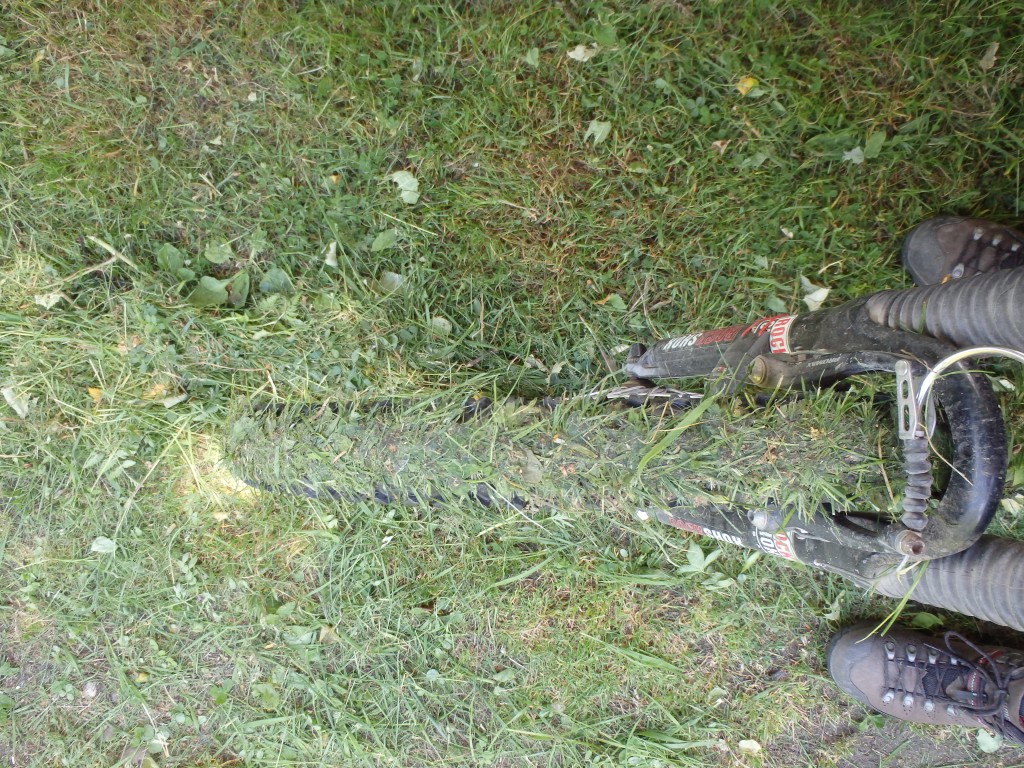 The day was going Ok until Susan managed to fall off on one of the rutted narrow gravel bits banging both knees. One looked quite nasty with a bleeding gash and the other one although not bleeding looked like she had pushed an egg under her knee cap. Bravely she got up and remounted; to be fair she had little choice we were in the middle of nowhere. 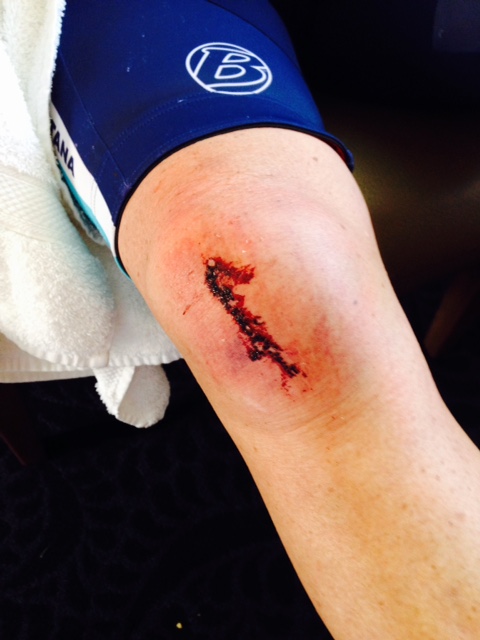 Shortly afterwards I got my first puncture of the day, the rear again. This time though it was not raining so it was not quite as unpleasant as the last trip. We were well practised at this by now so it was panniers off wheel out, tyre off, tube out… while I reassembled the rear end after putting in a new tube Susan found the hole and repaired the old tube. 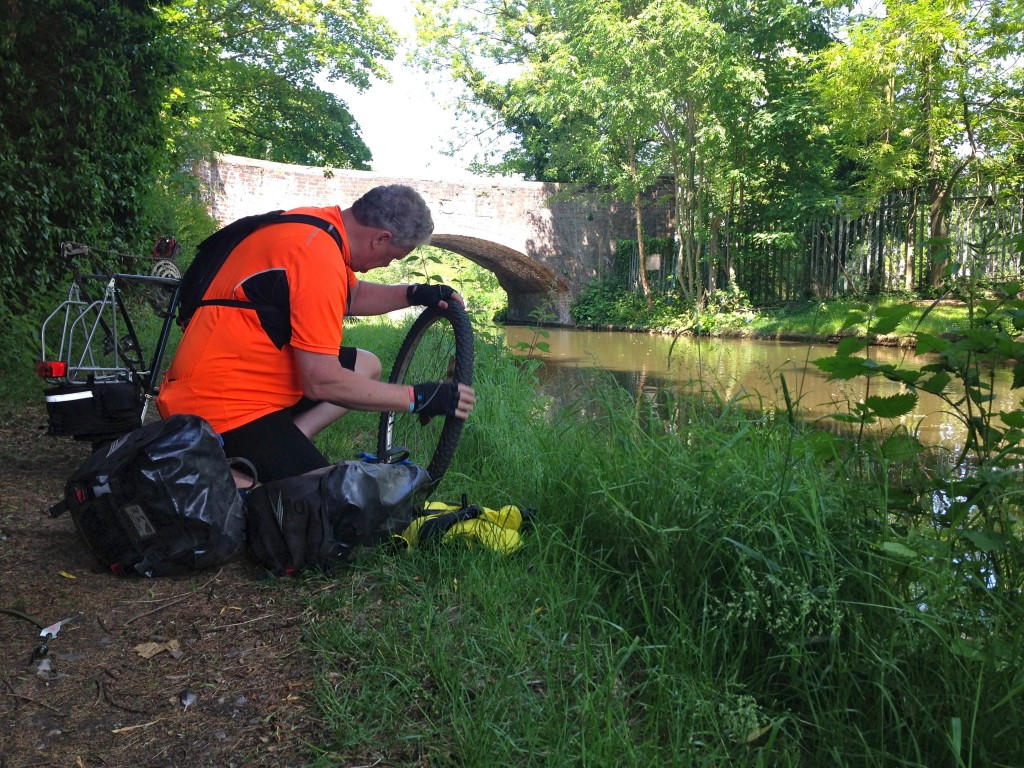 Within 10 mins we were on our way again, we had done this so many times we were almost as fast the Mercedes F1 pit crew. Putting the air back into the tyre was a slow process and I think we need a more powerful pump to get enough pressure in for a ride like this. The pumps we had were both fine to add enough pressure “get you home” but not really up to 50 miles on the canal tow path fully laden.

With about 10 miles to go the track got very bad, rough vegetation interspersed with mole hills and then I got another puncture. At this point a friendly passer by suggested I should get tubeless tyres, yes even in the middle of nowhere you can meet a smart arse. 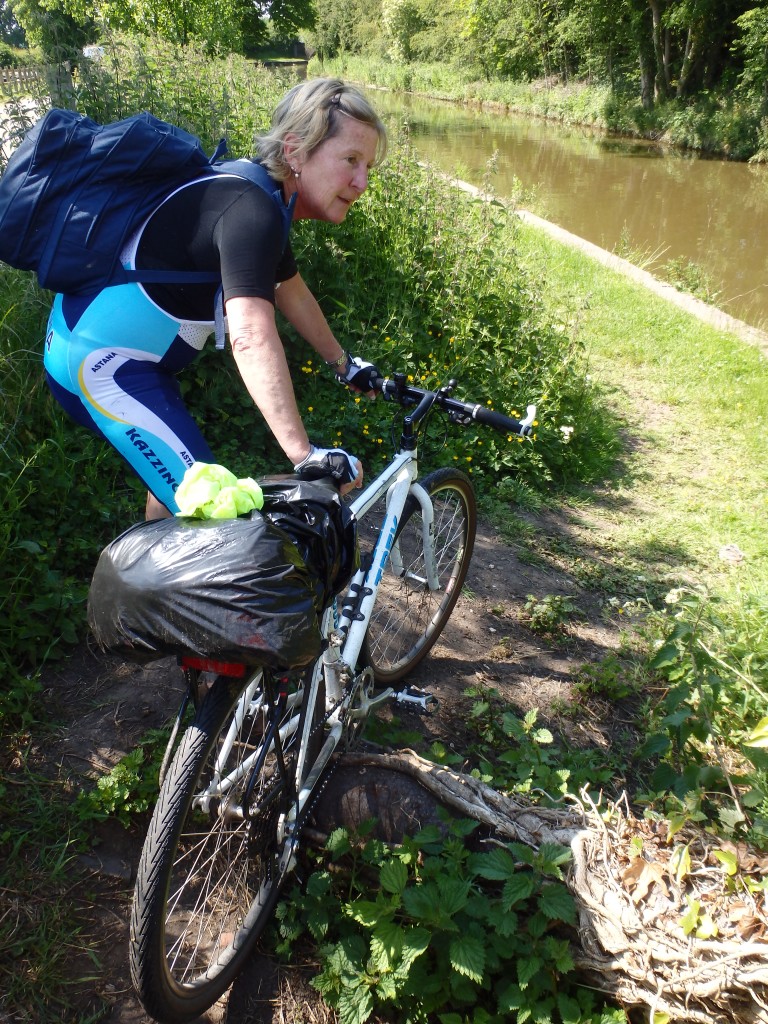 Fallen trees.. not too bad LOL

We went into pit crew modes and repeated the previous process, no problems at all but it did take us a while to find the thorn. Surprisingly at this point Susan’s split knee started to swell quite noticeably, something must have “gone” with all the bending lifting and twisting to sort my bike out!

It was the same old story she had no choice but to go on so we cycled on until we arrived at the Dog and Doublet which was our stop.

The very helpful young man behind the bar gave Susan a bag of ice for her knee and he then showed me a garage where I locked our bikes up then we booked a table for dinner and went to our room.

Dinner was very good but we were unable to eat barely half each.. the portions were very large and we had eaten all Keith and Sandra’s food during the day.

A bottle of wine and a couple of pints and it was time to check the route for tomorrow and get some sleep………………….. we were in the land of nod by about 8 absolutely knackered