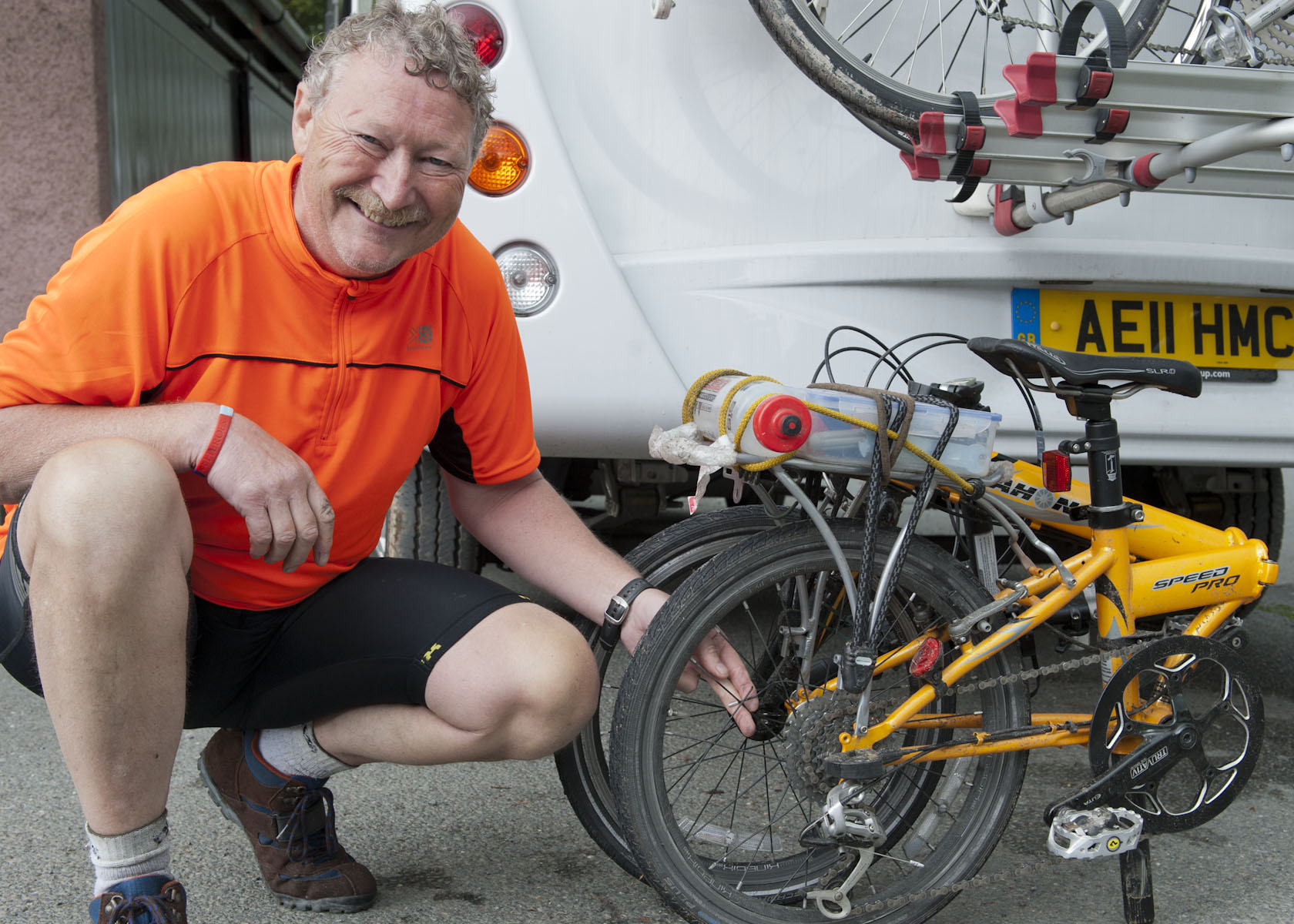 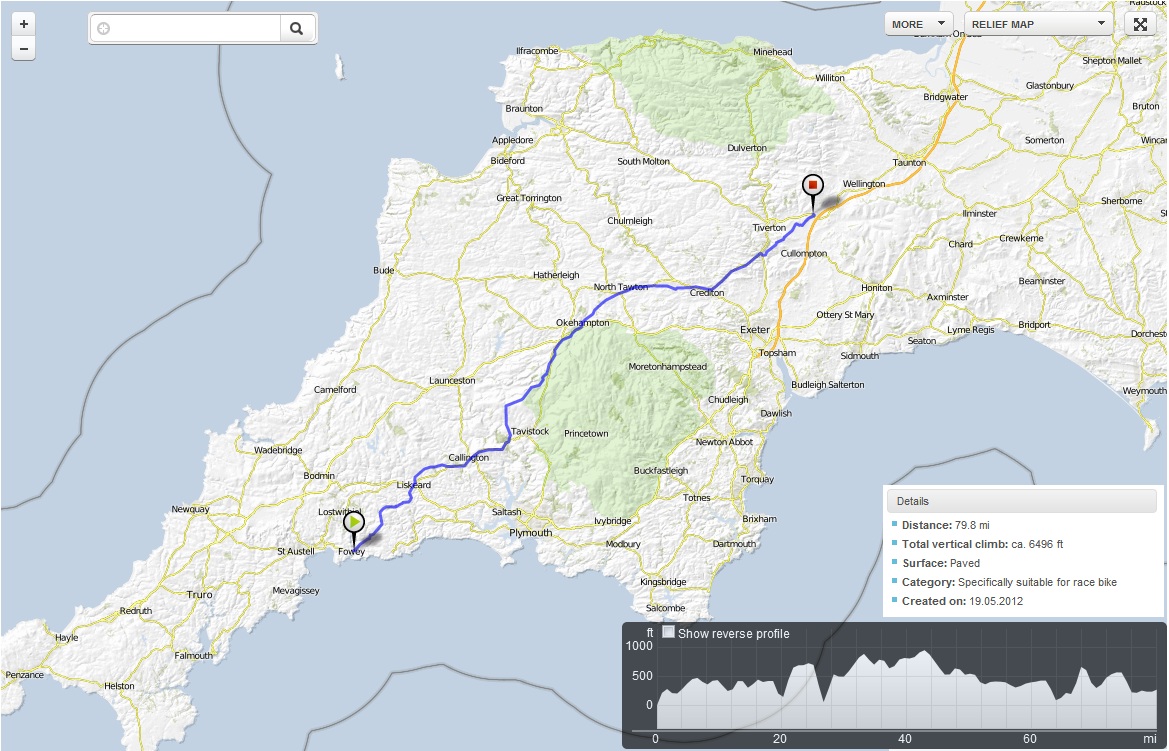 Day 2 will see us travel from Bodinnick to Sampford Peverell – stepping up the miles covered to 85! Initially we will take B roads before getting onto the A390 to Liskard, then travelling on to Oakhampton, which will see us skirting around the edge of Dartmoor. There should then be a dedicated cycle route which runs parallel to the A386 and A30 into Oakhampton.

Once we get back onto the roads, we will mainly take the A3072 through Creidton towards Bickleigh and then B roads and lanes again around Tiverton to Sampford Peverell.

As with day 1, this route will cover some rolling country side, with a few steep (but thankfully short!) hills thrown in for good measure. Once we have completed this leg of the journey, we will be camping at Minnows caravan and campsite.

Up very early again but not Robs fault this time as he was still snoring quite loudly when Paul and I started stirring.

Felt very nervous about today after the hills of yesterday so did not sleep well and as I said woke up early.  Breakfast was a very subdued affair with all the bravado of day 1 well and truly gone!!

We got off nice and early at about 7 30 at the first sign of anything too steep we settled into a low gear slow climb.  After a few miles Dave and I settled on another plan which was GET OFF AND WALK!  This worked pretty well until Dave decided to get off and I was not quite in synch with him…. RESULT:  me stuck in pedals and falling down.  No harm done so unclipped and set off again.

Today was proving to be not as bad expected with a noticeable change being frequent (about every 90 mins) stops to take on food and drink even having coffee in a local pub where the scornful locals told us we had reached in a day and half where most people stopped at the end of day 1.  I did state that I was quite old so it was acceptable.  The pace was also noticeably slower but with some frightenly steep descents on road covered with various organic substances, moss, leaves and some of that nasty brown stuff that is often found on rural roads.  I am certain that at one point my brake pads were melting and I made a conscious decision to buy some new ones soon as I did not think these would last the trip.

After the second or third stop of the day we set off only for me to hear a slight explosion from the rear wheel and the bike start to move sideways quite strangely… I thought the rear wheel had come loose.  After managing to avoid falling off I checked out the rear and had 7…….. YES 7 broken spokes.  This was a bit of a surprise as I have been cycling since I was about 5 years old and cannot remember anything like that ever happening before, then again can I remember anything that happened last week, never mind when I was 5?

Pretty terminal state of affairs as the wheel far from true so I was going nowhere.  I unclipped the brakes and started to walk, Paul and Dave kindly accompanying me even though I suggested that they go on.

Within a mile Paul had flagged down a very nice couple, folded the bike and stuffed it in their boot.  Thanks to John and Avril Watson who drove me to the nearest village and dropped me off at the pub where I sat waiting for Rob to come and rescue me.  By some amazing telepathy when Dave and Paul came through the village they stopped at the pub, I have no idea how they knew that was where I would be waiting for Rob.  Dave asked where my bike was and I told him it was “in the shed out the back”, one of the locals at the bar corrected me quite sternly saying did I mean the sun lounge!?  I still say it was the shed… He later told me it was a conservatory… even he did not seem to know what it was.   I still say it was a shed… but then again I now live in Surrey so I have obviously become quite “Posh”.

The time passed and there was no sign of Rob so Paul and David were persuaded to continue and leave me to wait.  They waved cheerily at me as they left to continue….

The plan was get my other bike off the back of the van, change the pedals as I had SPD cleats on my shoes and the other bike had “look” pedals and then continue….

Rob arrived about 30 mins after they had departed and we put the plan into action unfortunately one of the pedals refused to come off so we reloaded both the bikes and set off to find a bike shop.  Sunday in the middle of nowhere NO CHANCE!  We drove about 50 miles up the motorway and not a sign of assistance anywhere so we drove to the camp site to get ready for the two heroes to arrive.

On arrival at the camp site the very helpful odd job man tried to help but again he did not have anything resembling a pedal spanner.  I had bought one especially for this eventuality but had managed to break it when trying to remove the second pedal not a great day.

Paul and Dave arrived after a very long day (88.4 miles) looking absolutely knackered , soaking wet and not very enthusiastic.  Paul had managed to get a puncture about a mile from home so he had a bad end to the day as well.

Quick showers for all then off to the local for dinner…. which is where we are now, I actually typing this waiting for dinner to arrive.

So what is next for me?  In the morning I am going to get a bike fixed and be on my way.  Feel a little disappointed to have so many issues so early but as I said I have never had a spoke break before.

After the breakage I was feeling pretty down but then remembered that I am “Lucky Mick” and consoled myself with the thought that if the wheel had gone when heading down towards the River Tamar I would quite possibly have been killed…. we approached the river down a very steep slope doing about 40 mph with a 90 degree bend and a low stone wall, I would have hit it or if lucky gone over it into the river, neither would have been a very pleasant outcome. 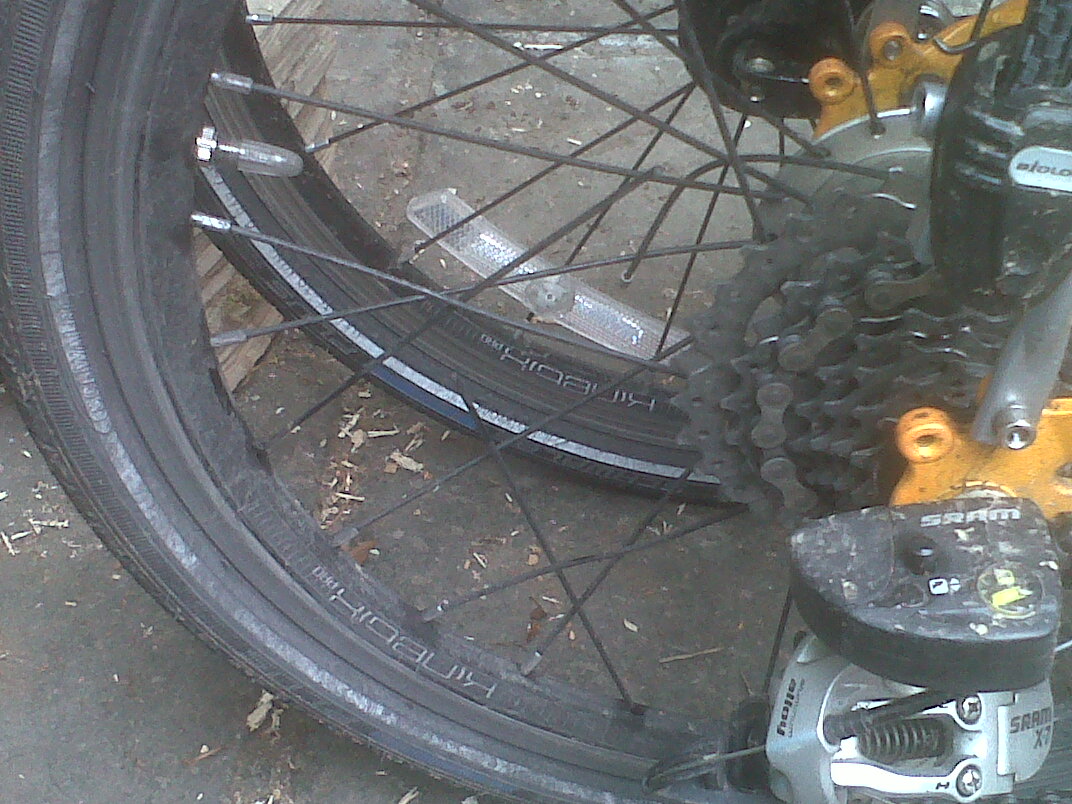 Rear wheel is a mess 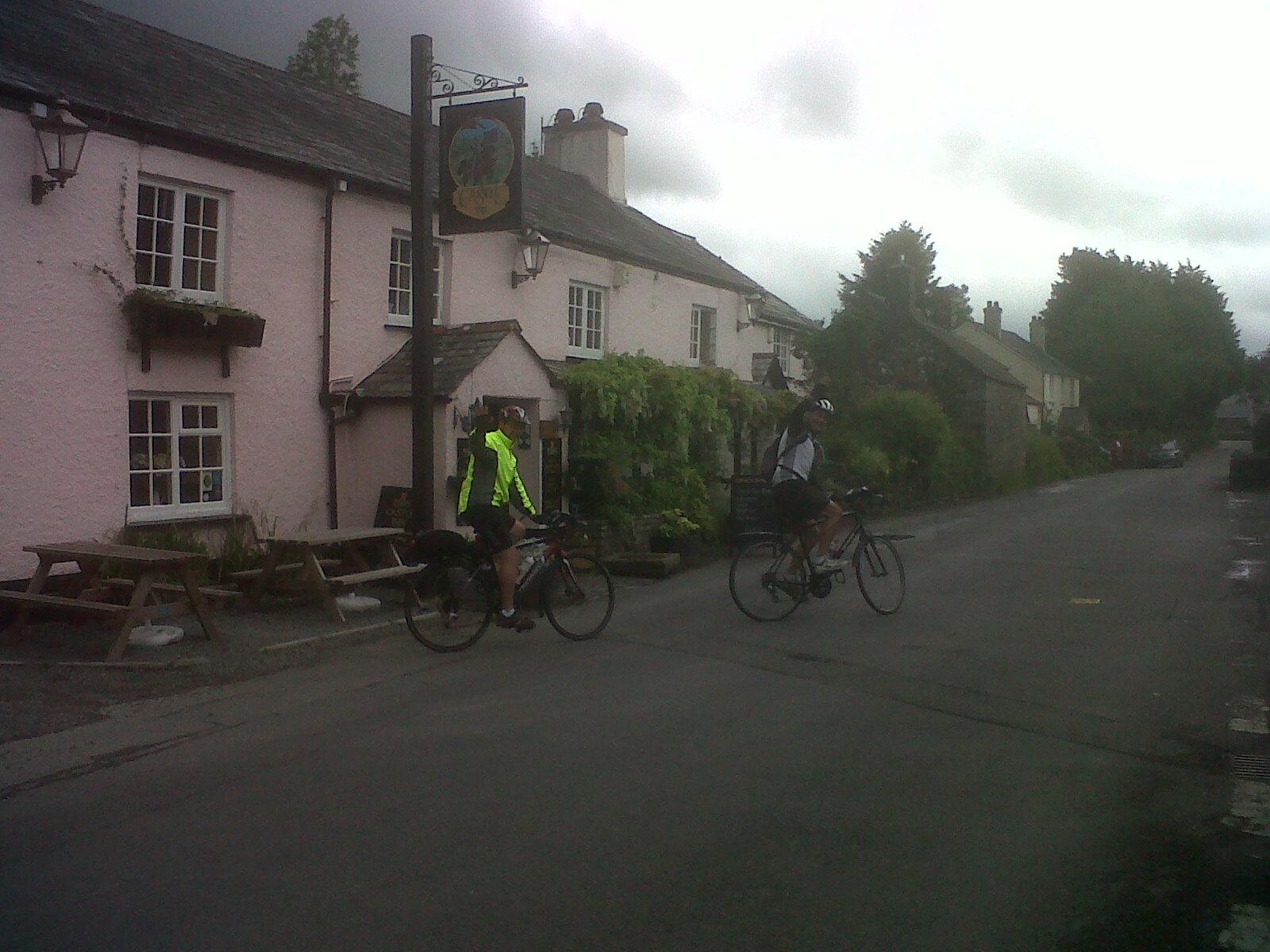 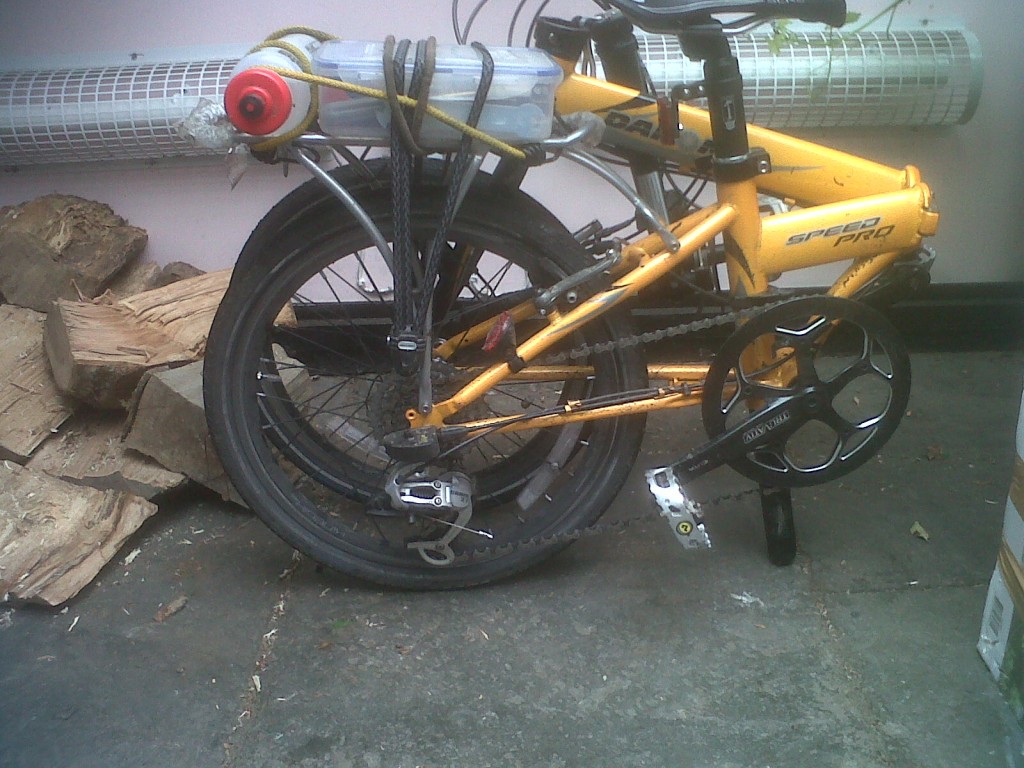