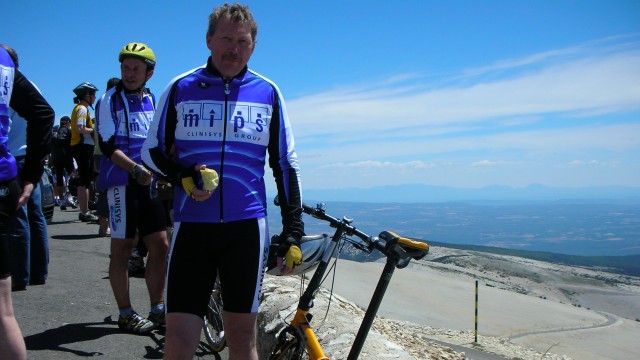 Up Mt Ventoux on a 05 Speed Pro

Hi
Bought the speed pro from an on line e-tailer in UK for a reasonable sum, as it was last years model. It was bought as a birthday present by myself for myself! The main reason for this specific purchase was that my local train company does not allow full size bikes on the peak hour trains.

In June I had the opportunity to cycle up Mt Ventoux as part of a team building exercise for two IT companies that have recently become part of the same group (http://www.clinisys.co.uk/ and http://www.mips.be/). I don’t work for either company but the uptake from the UK branch was “not many” (one to be precise). I have very close ties with this company and cheekily suggested that perhaps I could go!

To cut a long story short it was agreed that it would be OK for me to take part (thanks Fiona) but I was then left with a bit of a dilemma as to what I should ride. I have an old bike (excellent quality) but the gearing is very long 53/42 and an 18/11 rear that I used to use for time trialling about 15 years ago, defiantly not suitable for a very retired cyclist!!!!!!!

The other options were a standard-ish Mountain Bike or the Speed. After a few training rides the Speed went from outright outsider to the favourite. After a bit of tinkering with handle bar setting and seat tweaking I had something that I felt very comfortable on and nothing near me in UK could even make me contemplate the lowest gear settings. I equipped it with Look pedals as I had to ride clip-less and my “Look” shoes are better for this type of ride than my SPDs (that was all that the decision was based on). I then started to suggest that I would be bringing my ladies shopping bike on the trip, everyone found this highly amusing.

After a few more training rides , the only problem I have had with the speed surfaced. When really pushing it downhill if I saw a bump in the road I would lift myself out of the seat and stop pedalling. On two separate occasions this threw the chain off the front ring.

On visiting my local bike shop to purchase a bag to carry the Speed over to France I spotted a couple of this years bikes the normal and the Sti version. On close examination I noticed that a slight modification has been added to stop this happening. I contacted Dahon in the USA and they in turn contacted the UK distributor (Fisher outdoor) who forwarded me this little plastic guide within 48 hrs (WELL DONE GENTS Chris at Dahon and Chris at Fisheroutdoor.co.uk).

Anyway enough of the history suffice it to say that after a few more training rides I was sold on taking the Speed and I was prepared to put up with the ridicule.

On Thursday after a very long day travelling we arrived (both of us) in Avignon where a very good meal with some excellent wine was our first nights preparation. Next day, Friday we set off for our base hotel in Buis-les-Baronnies where we found a very cycling friendly environment. If you have never been to this region (which I never had before) it is cycling heaven, great scenery, smooth tarmac, cycle lanes everywhere and very cycling tolerant people. Almost everyone staying in the hotels in the region has their bike with them.

On unpacking at the hotel we joined up with the Belgium section (MIPs) who proceeded to take the piss (very light heartedly with lots of smiling). We decided a small warm up was required to sort our bikes and get ready for Sat and Mt Ventoux. We did a very gently up one hill and back down again just to make sure nuts and bolts were sorted etc. On the way back down one member go so excited that he ran off the very steep road and “Hurt” his neck plus put a very big dent in his brand new Giro helmet, forgive me but every time I think of it I have to giggle.

I was by now beginning to think that I had made a reasonable decision to take the Speed as I was probably the oldest person present by quite a margin and was easily able to keep up. On the descent I was only just beaten by a much younger fitter chap but we were not racing honestly. I was actually very pleased with the Speed at speed as it felt reasonable but not quite as secure as my full size trusty bike left in UK. We were doing up to 50Ks / hr

The evening preparations for the cycle the next day up the “Big One” involved another large meal with more excellent cote de Rhone, after all we were in training.

Saturday morning dawned bright and sunny with only a slight trace of the Mistral wind so off we went to get started. This was the only area where my bike was not quite as good as the rest as they just unloaded and tinkered but I had to unfold and set the seat height. I could have packed it unfolded but we only had a Fiat Panda and the full size bike took up most of the space. Took me about 5 minutes to get the seat right so a bit of poodling up and down until I felt comfortable and we were ready to go. Team photos were taken and the piss taken a little more “was I really going to use that folder”.

We set off from Aurel on a good flat road to Sault, which is the start of the climb on the “easier” side (some of the group did the very hard Bedoin side). The weather was very pleasant and the beautiful countryside unfolded before us as we began to climb. We all knew that we had about 29 ks to go all uphill so no one was rushing but we were very soon separated as each of us settled into our own pace. The ride up was fantastic; I had set my heart rate monitor to alarm at 175 and was determined not to exceed that by much! The first 23 K is very beautiful gentleish climb at an average of 4.5% and the wind was very helpful at times and a great hindrance at others.

There are very helpful distance markers along the road but these were incorrect by about 6K!!!! You soon realise this as the summit is marked as 1K away and you have not even entered the barren white rocky area.

When I came out of the woods into the full glare of the sun you get a real idea about what a difficult job you have let yourself in for. The Bedoin side and Sault side merge at this point and it suddenly gets much more difficult. Just at this junction I caught up with one of my team having a bit of a breather and I stopped to pass the time of day, this was a very big mistake. Setting off again up the very steep hill proved a little tough as the gearing on the Speed forced me to pull wheelies when setting off as I needed to get some momentum to get the other pedal clipped in. I eventually had to go down the hill to get clipped in then turn round (not very far I assure you)

The final 6Ks is staggering, we have probably seen the Pros go up it as if it were flat but we have also seen some of them look to be going like I was, breathing hard and sweating.

My sense of achievement on reaching the summit cannot be described, the views were fantastic and the interest generated by the appearance of this folder at the top was very surprising. I had my photos taken with the Speed like I was some celebrity (I can see them now telling everyone that they met this nutter at the top of Mt Ventoux on a folding bicycle). We sat around and waited for the rest of the team to arrive, as surprisingly for them I was nowhere near last. Eventually we all got to the top so proving that it can be done by quite a spread of people on quite different machinery. We ranged in ages from over 50 to twenties of both sexes and on everything from my Speed to some very fancy Italian hardware.

Now for the really exciting bit, the descent

I cranked the speed into top and just went for it. No one passed me on the descent at all and this is partially due to my insanity but also due to the reassuring feel from the bike. I now knew that the chain was not going to bounce off and that I didn’t have too far to go from the bottom to the bar where a very well earned beer awaited.

Finally the bike got the respect it deserved and even the sceptical “team Members” took my picture. Saturday was rounded off by yet another good meal with more wine then off to bed, as I had to get up early on Sunday to get the train home. So all in all a very good trip although much too short a time. I would recommend cycling in the region to anyone and if you need better more factual information look up Mt Ventoux on the web. I will certainly be back.

Tech Spec: Bog standard Speed Pro 2005 even left the bell and reflectors on, Look pedals, 3L water carried in camelbak (one problem with the speed is the lack of sensible water cage mounts but I could have put something on the stem) 1L brought back.

The only fear that I had was that the handle bar stem may be too flexible when “straining” as I do pull back when I am really trying hard. The reality is that the Speed had such fantastic gearing I never had to stand up, even Lance Armstrong got out of the saddle for the top.

Final Note the chap who fell off and hurt his neck was FIRST to the top and he only packed his bike in the car as an after thought as he didn’t feel well enough to go up.